How we all feel right now...
Merry Fucking Christmas 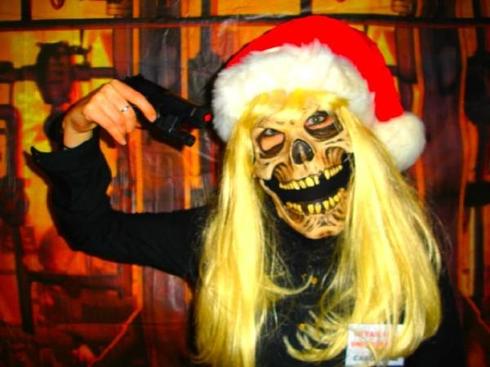 Hey Santa, you fat old badass I'm sending you an email because I've been trapped in Retail Hell and barely had enough time to take a shit with my store working me everyday and making me stay late.

So here's my deal, Santa Badass! In my opinion it doesn't fucking matter whether I've been naughty or nice this year. To tell you the truth I've been both, but you know what? I've had to put up with so much fucking shit from my Retail Hell job, co-workers, and customers, I think I deserve to have everything on my list and anything else you may want to throw in. I like designer shoes and bags, Godiva chocolate, and my favorite car is a Porshe. But here is what I must have Mr. Santa Claus Badass:

1. I want a machine gun that I can use on all the crazy ass customers. But I don't want just any machine gun, Santa. Mine has to be bubble gum metallic pink with skulls engraved all over, leather trim, diamond studs, and made by Prada. It hast to be stylish, comfortable and I don't want it to shoot bullets. I want it to shoot marbles, one that will leave nice big welts. This way I won't kill people, but they will know my wrath and not fuck with me anymore. 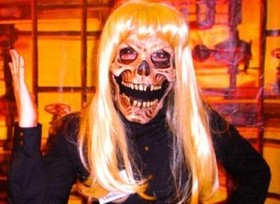 3. Next year I want the store to provide boxmakers and giftwrappers. People need jobs.  I need someone to make boxes and giftwrap because I fucking hate it. My hands hurt right now and my cuticles are torn to shit from making fucking boxes.

4. Get me a Xanx Dart Gun. This is for all those whiny, bitching customers who don't take no for an answer. I'd like it small, compact, cylinder-shaped and in shiny black. Then I can hold it in my hand. A small button could release the Xanx Dart, which the recipient would not feel. The Xanx takes effect immediately and they stumble out of my store relaxed and not caring.  I'll need a year supply of Xanx Darts to go with it. I'm sure I'll use several hundred on the 26th alone.

5. I want a bunch of flasks in the shapes of retail register items: a pen, a stapler, a tape dispenser, counter cleaner - whatever you can dream up that I can get away with. This would be for all those customers who ask me stupid questions. After I shoot them with my Xanx Dart Gun and they leave, I could take a swig from wherever. I would like a case of Grey Goose Vodka to go into the flasks.

6. I want you to issue a worldwide decree that you will no longer deliver presents to anyone unless they KEEP THE SHIT THEY BUY! Yes, Santa, I'm talking about NO MORE FUCKING RETURNS!!!!

7. Get me a hot, muscular 300 Spartan Soldier to do my bidding at all times. I want him to do shit like help customers, take me to work and pick me up, and do my laundry. 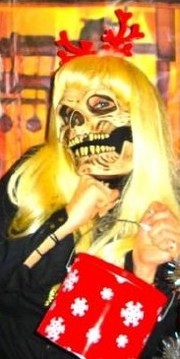 8. I must win at least $50 million dollars in the Lotto. Surely you must know what next week's numbers are you Jolly Jingle Jerk. Mrs. Claus probably has em tucked away in that monster brassiere of hers. Get in there and get them out Santa!

9. I'd like a month long - paid vacation to a tropical island where I can sleep for as long as I want and be served drinks with umbrellas in them.

10. As you Know, I'm a Retail Slut. My real dream is to be an actress, so Santa, I need you to get me THE FUCK OUT of Retail Hell and get me into Johnny Depp's new movie as his co-star or better yet, have Warner Bros. find me a female Superhero role that I can make bank on and have a doll made into my own image that will sell millions.

That's it Santa. I think you can handle those demands-I mean requests. If I don't get the crap I've listed about - plus those designer shoes and bags - I'm going to be very pissed Santa. I will hunt your fucking ass down at the North Pole and make you fulfill my wish list.

In the meantime, I hope you and the misses have a wonderful fuck-ass Christmas!

P.S. If you have any extra elves not working out, send em my way, I could really use them for cleaning and cooking after my Retail Hell Days. Just make sure they are potty trained.