The Most Annoying Customer Line Ever: Excuse Me 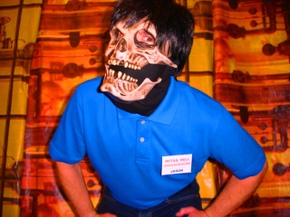 The only time Excuse Me should be uttered by customers in a store is if a Perfume Squirter is chasing them down the escalator or they have grabbed a sale t-shirt at the same time as someone else and a fight is about to breakout. Using Excuse Me for those things is completely acceptable, but using it to hail one of us Retail Slaves should be made a punishable Retail Crime.

When Customers blurt on "Excuse me," as we all know, it's almost always while we are on the phone or helping another customer. It's often times said louder than a normal voice and sometimes even shouted. Where did all this rudeness come from? It has definitely gotten worse over the years. People can't seem to wait 30 seconds, let alone for their turn.

When a Customer says "Excuse me," what they are really saying is, "Drop what you are doing right now and pay attention to me."

What We Would Really Like to Say back is: "There's no excuse for you and your rude-ass behavior. I've decided not to help you. How do like those fuckin' apples." But of course we can't. We have to find some way to put on our Retail Droid face and pay attention to them while doing whatever it was they interrupted us from. Excuse Me is Multi-tasking Monkey Madness at its worst.

Excuse Me is almost always said in a condescending tone as well. Rarely do we hear a customer say, "I'm so very sorry to interrupt you on the phone, will you please excuse me, I most desperately need to find a bathroom." If a customer was ever this polite it sure as hell wasn't in our life times. Many times they don't even pause after shouting the irksome retail demand, "EXCUSE ME, WHERE'S THE BATHROOM?"

And we all know what usually follows the abominable Excuse Me phrase: Glaring eyes, annoying finger-snaps, and irritating fingernails tapping on counters.

Freddy wishes he could point a laser at those glaring eyes, Jason wants to break those snapping fingers, and Carolanne said if she hears one more fucking fingernail tapping on her designer class counter she is going to whip out a sledgehammer.

There is no excuse for using Excuse Me to get a Retail Slave's attention. We want it banned forever! Any customer that says Excuse Me should be fined $500 which would go into the Support Underpaid Retail Slaves Fund. We'd make more money that a swear jar in a prison dining room. Ka-ching, ka-ching, Beverly Hills here we come.

I only have a black Ace shirt on like the rest of my co-workers and a fucking radio on my hip and a fucking ear piece and what not. AND I'm doing something with merchandise/shelves/etc. But nope. Don't work here. I shop here dressed exactly like the employees. Geesh. What do you THINK!? Lmao.

I fucking HATE when people say Excuse me. The only time they should say it is when they FART. Which is often enough...

Wait...your customers actually know the phrase 'excuse me?' Mine definitely don't!
I'm a store mgr and on any new hire's orientation day they learn my personal policy. "You are to ignore ANY customer who tries to get your attention by snapping, clapping, whistling or waving!" And when the cunt says "I've been trying to get your attention..." I tell them to say (with a smile, of course!) "Oh, I'm sorry. The way you were snapping and whistling confused me. I thought you were trying to get the attention of a dog, not another human. Would you like to try those on?" :) You know the rule...Kill 'em with kindness. It'll drive the bitch crazy.

Ooh, I've had that. I hate it too. The worst was when I pointed a custy to the printer ink, and when the dumb bitch couldn't count THREE AISLES up in a straight line, she YELLS over the damn counter "EXCUSE ME! WHERE DA INK AT?!"

This is terrible! I think that it is extremely polite to utter 'excuse me' if I am interrupting a sales clerk at another task. I've looked around for someone else to help me, and you appear to be the only person in your department. Should I stand here for the next thirty minutes and wait for you to finish whatever it is you are doing- or go drag someone else from house wears to help me in electronics? No, I think excuse me is extremely appropriate- and much better than the alternative, where I some how manage to destroy your department while trying to assist myself.

I must admit I've used excuse me a couple of times on someone that has been busy but instead of those helping other people/manning a busy register I try for the staff that are doing recovery work. The lesser of two evils.

I don't see what's so bad about saying 'excuse me', as long as you are *saying* it rather than shouting across the shop, and aren't butting in on someone who is obviously busy and stressed. If the shop worker is clearly not helping another customer, and is maybe stocking a shelf or something, I think it's highly appropriate to preface your request with 'excuse me'. I know I'd prefer if the customers said it to me if I were working, rather than just jumping right in with 'Have you got any more of these' or whatever...

when i worked in a supermarket, i had to venture out from behind my protective counter onto the shop floor, and i used to cringe when i heard those fated words - i wanted to shout at them "i make salads all day! i very rarely step foot out here, and when i do it's only across the aisle to the green sprouting things! how the hell do *i* know where the freakin lightbulbs are?"

i once was sent on a dangerous mission across the whole damn store (pull cap down, eyes on floor, walk v.fast, radiate aura of hatred) and someone asked me where the eggs were - i stared at them and then slowly pointed down the aisle at the HUGE plastic chicken ¬.¬ someone else asked me where tinfoil was while she WAS STANDING RIGHT IN FRONT OF THEM

at least "excuse me" is polite and is better than "hey you!" but it still made me die a bit inside...

I always ask "excuse me", but only to employees who aren't currently on the phone or with another person. And I say it demurely while internal flinching because I get absolutely terrified that I'm interrupting them.