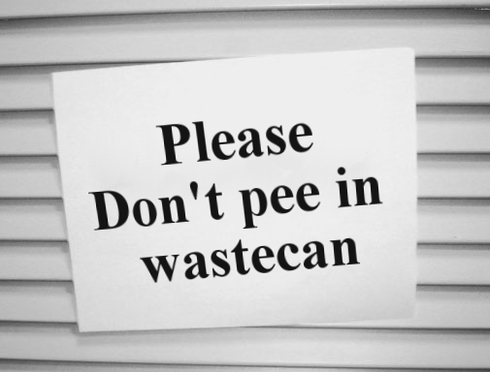 Humor blog Ration Reality's The Bagel of Everything was kind enough to make a new Fitting Room Door Sign for us. Thanks Bagel! Be sure and check out RATION REALITY. Some seriously funny fucked up shit..here's a link to it: www.rationreality.com This is a Fitting Room Slug Monster. The female version is pictured, but there are also males just as dangerous. We have reason to believe that one was responsible for leaving a dragon-sized snot ball on a fitting room wall and ultimately horrifying Retail Slave Fatima (posted February 16th). If a Fitting Room Slug Monster slithers into your department, the only appropriate action is to run for your fucking life. In order to make a quick escape, any lie will do: I have to go to the bathroom. I'm suddenly sick. I have to go on my break. My child needs to be picked up. My pet needs to go to the vet. Whatever. Just get the Retail Hell out of there. If you don't, the Fitting Room Slug Monster will slime its way into a fitting room and leave a path of destruction....CLICK HERE. 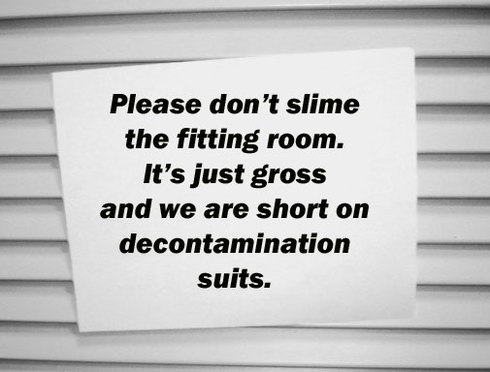 Retail Words and Phrases That Suck

Since we are venting about Fitting Rooms this month, RHU recommends a few words and customer questions that should be BANNED in every fucking fitting room from here to china.

Words that should be banned are any that hold a meaning of us having to put away the piles of fucking clothes people try on. Here are a few slang retail words some stores use:

We have no idea why this word was invented to describe fitting room cleaning duty, but the toilet and garbage similarities with dump seem like no coincidence. More often than not, what's left behind in a fitting room can resemble both.

Supposed to mean return to stock, but we all know it really means Retards Trash Store.

Go to hell. Goback yourself!

It's meaning should be exclusive to trees and penises. Not merchandise that needs to be re-shelved.

Questions that should be banned:

Asking to try on underwear.

This is just plain gross, but people still ask. A good comeback to say to a customer is, "Sure you can try on underwear, only you have to use the sample underwear everyone else uses."

Asking to take 300 items into the fitting room.

Like we're gonna say, "No problem!" to some bitch taking in this many items so they can leave a tsunami of clothes for us to fold and re-hang. Thank god, most Stores have limits because of Nasty Ass Thief issues.

Asking for help with trying on the clothes.

If anyone asks you this - run for your fucking retail life! - because the person that will ask you this will not be hot and you will most likely see them naked, which could cause you to barf up the shitty mall food you had for lunch.

Asking to try the same thing on in 5 different colors.

Makes us want to say: "The green is not going to fit different from the purple, dumb ass!"

Asking to bring a friend in the fitting room.

Most of the time they don't ask, they just do it. And most of the time they leave the place trashed just like in many of the vile stories RHU Retail Slaves have recounted this month. If more than one person goes into a fitting room on your watch our suggestion to you is to pick up the department phone, dial 911 and tell them terrorists have just entered a fitting room. 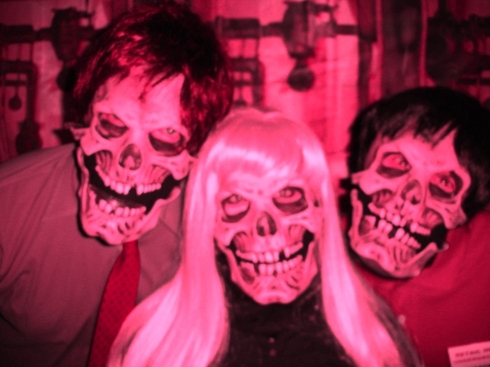 Hey Retail Slaves! It's time to meet our newest Underground Blogger, Regan, a Retail Whore that tells it like it is. You also don't want to piss her off. Pictures to follow soon. In Regan's first post at RHU she tells how a customer made her snap:

It was a disgustingly busy Saturday at the Outlet Mall......again.

My manager was cashing out a lovely woman (sense sarcasm yet?!) and her mother. She had just completed her sale. Apparently this bitch was giving my manager a hard time and so she made me take over! The store manager couldn't even deal with her?! I knew it had to be bad...

"Oh great", I thought. "Just keep your mouth shut and we won't have problems, Regan.." Easier said that done, right?

As soon as I stepped up to the register I swear the woman's eyes lit up. She looked fucking evil... I thought I saw a pitchfork...but I tried to ignore it.

Lovely...someone was doing price changes and forgot to change those fucking hang tags on the pants. Fucking great.

I was going to change the price of them to make her happy and everything would be fucking peachy....or so I thought.

She then proceeded to bitch and moan about our signage around the store. Saying it was "deceiving" and what not. Simply put..she was being a cunt. Making a huge scene at the registers...

This entire time she is ranting I am so polite and quiet. It was disgusting how nice I was being! I just wanted to get her out of the store before I gouged her fucking eyes out and shoved them up her tight ass.

I said, "Listen...we aren't in control of the signs! We don't go out back and print them off! Corporate is totally responsible for it and I think you should contact THEM about it. Not me. We just do what they say!" Which is entirely true. We, the employees, are like Corporate's dirty bitch. I hate being someone's bitch! Well, unless it's in the bedroom. But anyways. Even after I told her that, she continued bitching me out. She just kept egging me on. She was slowly pushing my buttons and she was just about to hit the wrong one...

So then she says, "I want a refund. I don't want any of this." Yup, she definitely ruined her chances of getting what she wanted.

Well...I guess by that time I had just basically had enough of people's shit. I mean, it was a horrendously busy day and there were people up my ass all damn day. I snapped. Like a fucking twig.

I snatched up her credit card from the counter and threw it at her (Chinese star style) and said, "Fuck you" and stormed off.

Needless to say, it was glorious to say that to someone finally! The woman was so pissed. She was going to "have our jobs". Shit! She would've done me a fucking favor to get my happy ass fired!

Now if you can say that to a customer and still keep your job...you deserve a fucking medal.

I want to hear about your own personal triumphs! Even if it ended in getting fired! Tell me about the time you told a customer to fuck off, suck it, or called them a bitch, cunt, fuckass whatever! E-mail me! retailhell@flash.net

Your mother sucks cocks in hell,