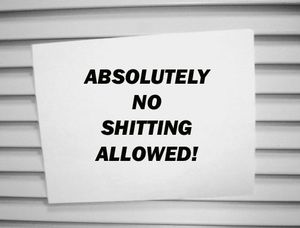 Freddy here, Retail Slaves. It's beyond any of us why customers piss and poo in our Fitting Rooms, but the sad reality is that it happens more often than not, even when a bathroom is located just ten feet away. There are all kinds of reasons for this animalistic behavior - Medical conditions, medication reactions, uncontrolled children, bad Mexican food, whatever...but I'm sorry...if you've got the fucking runs the last place you should be is in a store trying on clothes.

It makes our life a living, nasty, gross HELL!!! In my book Retail Hell, How I Sold My Soul to The Store: Confessions of a Tortured Sales Associate you can read my own personal poo nightmare in the chapter titled The Shitting Room.

But I'm not the only Retail Slave to have encountered shit in a store... 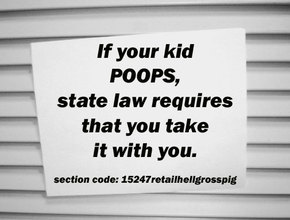 "OK, I found poo today. No really, 3 pieces of poo! I see a kid leaving the store crying with his parents laughing at him (who by the way is old enough to not poo his pants - he had to be at least 9). To my horror in the fitting room was 3 giant horse-size pieces of poo. Now this wasn't even in the room itself. It was in the hallway next to the mirror. Just sitting there in a pile. I'm wondering did he drop his pants for everyone to see? WTF is wrong with this kid. I was not cleaning that up. I don't make enough money to clean that up."

"When I was working in the fitting room a lady tried on clothes in the Handicapped room with her baby in tow. She was in there for like 20 minutes. When I did a walkthrough I found a mess - the nasty diaper laying in the middle of the floor open exposing the baby poo and piss surround by dirty baby wipes. The smell was awful. We got the cart attendant to clean it up, but my friend was so sickened he threw up in a nearby trash can!"

And Carr in Canada writes about one customer's shit storm:

"I worked for a certain clothing store with the initial ON, and wow there were some hellish times. I was the Fitting Room Queen. They ALWAYS stuck me there. Fits was right across from the bathroom, which of course brought on a lot of horror stories. One time a woman went into the bathroom, and when she came out the whole fitting room area reeked. I investigated, and there was shit EVERYWHERE in the woman's washroom. And I mean EVERYWHERE!. On the walls, on the stall door, all over the toilet, everywhere. Our poor manager went in there to clean up, and he discovered this woman's shitty panties in the tampon disposal box. 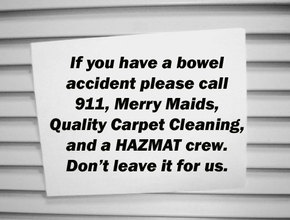 The worst part is, she didn't leave!!! She wandered the store after that, then came to fits to try on some pants. WITHOUT UNDERWEAR!!! Luckily she bought them and wore them out (which usually isn't allowed, but I had to make an exception). In addition, she had stepped in her own shit and tracked it all over the store, from Baby Girl up to Feature. What a nightmare."

What a nightmare indeed. People need to keep their poop in the toilets of their own homes. Not in our Fitting Rooms. Write your Senators. Let's get a law passed!

That is fucking horrendous.
Seriously.
I think I would fucking slap someone if they did that. There is NO reason to fucking shit your pants. Honestly.
Some days I think, Hmm, maybe I can go back to retail, it won't be so bad. Then I read these stories and scream LMAO

Ewww my stomach was heaving just reading that.

I need a shower now.

LOL!
I give the Poo Stories 5 stars! They are gross/funny...people can be unbelievably nasty!!!

So sick! Why do people do this?

This isn't a fitting room horror story, but one day when I was working in the Music Dept. at the Barf and Hellhole (I'm sure you can figure out what store I really mean) some fucking kid, who was not a toddler (which makes it more understandable, but still wrong), but was probably 9 or 10 years old, decided to poop on the floor in one of the aisles in between DVD and CD racks. There was no explanation whatsoever for his behavior, nor did we get one, and after the kid was gone, we all avoided that area of the Dept. like the plague. No one wanted to clean it up, not even the managers, but two of them eventually got stuck with the job. At first, all they did was block off the poop area so customers couldn't go over, then after what seemed like a really long time they finally cleaned it up. I had to keep telling customers not to go over there because there was poop, which was real fun. And then after the managers cleaned it up, my co-workers and I still didn't want to go over there, and I avoided that area for the rest of the day, since thinking about what happened over there made me cringe. It amazes me how disgusting people can be, that's for sure!

I found poop behind the clearance rack. I wouldn't clean it up either. Housekeeping came. He had gloves...said it happens all the time! WTF?

Ewww, these stories are so disgusting. Thank God I don't have to deal with fitting rooms. Although I did have to clean up some kids piss. He just decided to wet himself while queuing with his mum for the checkout, in front of loads of other customers.
Piss I can deal with. Poo? Hell no!

This is not a fitting room horror story. I was working as a bagger for a large grocery store company that will remain nameless. an older homeless man was checking out in the lane I was working he didn't buy much I bagged up his Items gave him the bag and he started for the front door as I began to bag the items for the next person I started to smell crap. The customers started to complain about the smell one happened to looked down and saw a brown pile on the floor. Yep the old fart DROPPED A FUCKIN LOG RIGHT IN FRONT OF THE ONLY DAM CHECK OUT LANE OPEN AND THERE WAS 5 OR 6 OTHER PEOPLE WAITING TO CASH OUT, SO WE HAD TO MOVE EVERYONE OVER TO THE NEXT LANE, AND RESCAN THE ORDER ALL OVER AGAIN. I TOLD THE MANAGER THAT THE OLD MAN JUST SHIT ON THE FLOOR IN FRONT OF THE CHECKLANE SO HE GOES OUTSIDE TO GET THIS DOUCHE, HE BRINGS THE OLD MAN BACK IN THE STORE TRESPASSES THE OLD MAN. AND THE OLD MAN SAID{ I DIDN'T I DID NOT DO THAT}.AND GUESS WHO HAS TO CLEAN UP THIS WONDERFULL FUCKIN PRESENT ME!!! THANK GOD FOR BEER.

This story is absolutely disgusting!!! At that point I would just be like "Get the FUCK out!!!"

Ugh. Once I went to use the public bathrooms for my store and saw a mother letting her 8 year old boy pee into the sink. And believe me, his aim wasn't very good.

How about finding a lady's sanitary pad all full of crappy blood.

Not quite poop in the fitting rooms, but I was doing recovery for a discount department store once, and the person who originally handed me the drink bottle didn't realize there was liquid in it, and I accidentally tipped some out, and me and my manager came to the conclusion that it was urine!