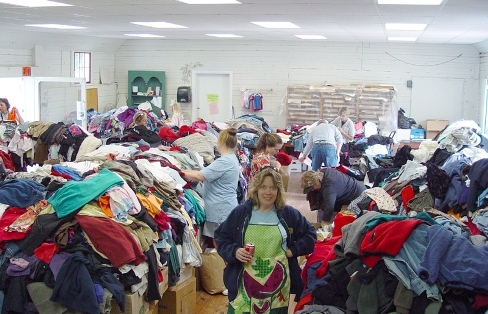 We can only think of two reasons why the woman is smiling like she's a wax figure: 1. She had about 100 of those Cokes or 2. She's just realized she doesn't have to fold any of those clothes. 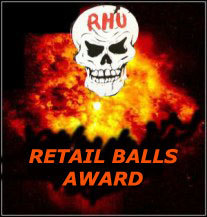 We're handing over a Retail Balls Award to Retail Slut Jessica in Maryland who tells us about taking a customer down after reaching the breaking point and unleashing a torrent of Retail Rage:

"I used to work at a Trendy Clothing Store that was considered the largest in out district. It was a busy night and I was manging the adult and kids and Baby stores by myself with three associates...after Christmas. Oh, and surprise surprise I was the only one able to ring!

Well this bitch called and complained to me, stating that she had bought something a couple of days ago and she never had the item placed in her bag.

I apologized and said I would look up the item number for her and let her know if we even had it in stock. We didn't. Now, our policy states that customers have 24 hours to call back and get a reimbursement.

I didn't feel like having to deal with telling her that cause i knew this fucking WASP would let me have it. I told her I would call her back once I  found it at another store and have it shipped to her. I also stated that I was the only ringer for two stores so I might not be able to get back to her until after we closed. I was being very nice, and went out of my way.

Well, this bitch decided to come in to my store no more that half an hour later while I had a line of six people deep. Fucking cunt decided to scream "Are you Jessica".

I said, "Yes, but you are going to have to wait in line if you need to talk to me".

I knew exactly who it was. She didn't want to wait. She began taunting me! I mean saying things like "Hurry up, Jessica. What's taking so long...Jessica" over and over. 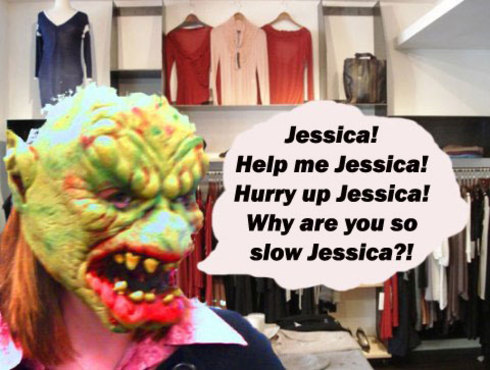 I started shaking because I wanted to keep my composure in front of my employees and my customers. She kept it up.

All of a sudden she screamed out, "YOU LITTLE FUCKING PRINCESS!!!"

I snapped. I fucking snapped. I slammed the scanner down on the counter turned around to face her and yelled "JESUS FUCKING CHRIST YOU STUPID FUCKING BITCH."

The minute those words escaped my mouth her jaw dropped! I was shaking so bad...I picked up the phone, apologized to customers in line (They didn't seem to mind - one of them actually thought I did the right thing) and told the woman I was calling security.

She started crying, apologizing that she was taking her anger out on me, she had a newborn at home and an incompetent husband blah blah blah....and then she hugged me.

It was so fucking surreal. I told her she needed to leave and that I accepted her apology. She then told me to go home and have a glass of wine. WTF???? I MEAN SERIOUSLY WTF....It was bizarre. I have never been called a fucking princess..hahahahaaa..."

We love your Retail Balls Jessica. Your story proves that sometimes when you bitch out the bitchy customers, they sometimes snap out of their psychotic state. Sometimes, that is.

Remember Slaves, if you have Told a Customer, tell us! Send us your tale:submit@retailhellunderground.com 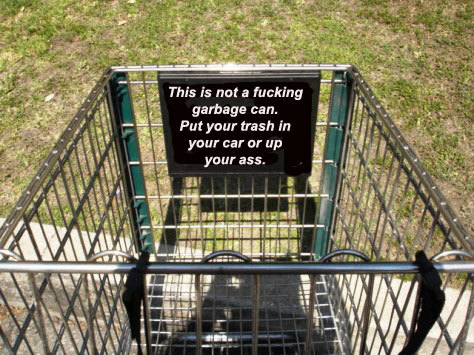 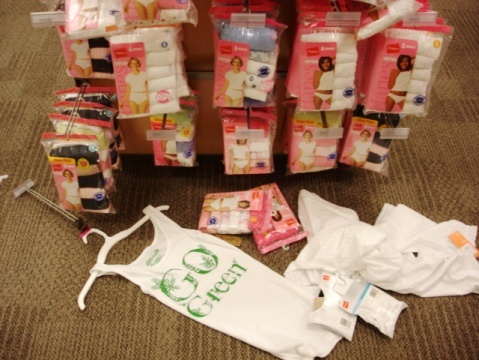 We swear this was not staged. For Piggy Shoppers Go Green must mean Go On Floor. 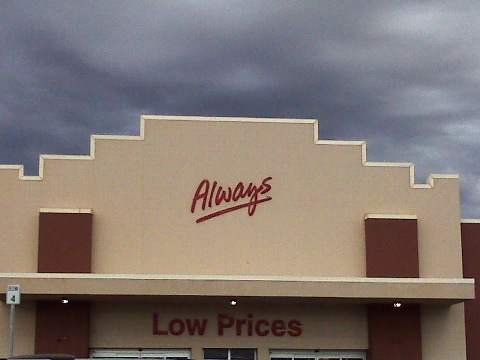 Megan from Oklahoma captured this photo with her cell phone of ominously clouds forming over a Mart. Ominous indeed. We ran the photo through our RHU Retail Hell Scanner to find what was really going on. To find out...CLICK HERE.