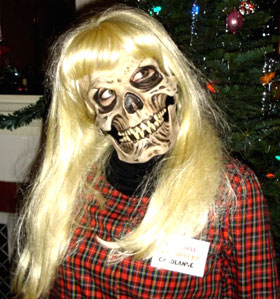 "We're allowed to wear Holiday t-shirts and sweaters and such to work for the month of December and I was taking up the company's offer by wearing a Hanukkah t-shirt that poked fun at a secular Christmas tradition- it had a bunch of presents in front of a big menorah and it said "Santa Schmanta" on it.

Of course, in order to make sure that all people continue to take themselves too seriously, a lady decides to find my t-shirt offensive. She spews off all sorts of anti-Semitic stuff and says I'm the spawn of Satan, destroying good Christian principles like Santa Claus. 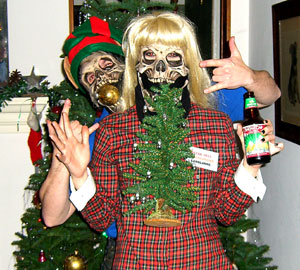 The two ladies started yelling at each other, and the anti-Semitic lady threw a punch (well, it was more of a limp slap with two inch fingernails, but you get what I'm saying) and these two ladies end up in an all out, rolling on the floor, scratching, hair pulling, catfight, right on the front end of the store.

I call security, and they call the local police.

Security separated the two women by the time the police got there, and the police walked them out, and asked them not to return unless they could behave themselves.

Merry Whatever You Celebrate!"

Oh how we'd love to see the store video on this one!

Santa Claus is Christian? That's news to me!

I believe that the connection of Santa Claus as a Christain reigious figure is to Saint Nicholas, patron saint of sailors, merchants, archers, children, and students. Know for being attributed to miracles of appearing to those in need or secretly providing them gifts, usually monetary, and often placed inside a sock or shoe (thus the tradition of stockings on the fireplace to be filled with treats). However the rotund red suited man in a levitating, ruminant driven sled is far, far picture from the 3rd century Bishop. Regardless I find it pointless to cause such a tummault over something so trivial.

-This has been Profesor Spritzy, Thank you and goodnight.

You forget, Professor Spritzy, that Saint Nicholas is also the patron saint of prostitutes. Which, depending on the person, could definitely fulfill someone's needs if one could fit in a shoe!