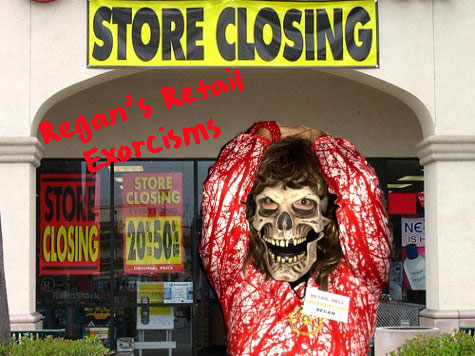 When your store is closing there are even MORE Customer pet peeves than usual.
Normally there is a shitload.
But when your store is liquidating everything, at dirt cheap lol, there's a shitload and a half more pet peeve Customer questions.
Let's take a fucking gander at some, shall we?
"Is your store closing?"
Now...this may be a valid question. But...when your store is down to about 5 thin walls of merchandise, it's an annoying question. My boss even said once... "Now what would make you think that!?!?" Haha. Love it. Friday, a guy said to my boss..."So you're closing huh??" with a dumbass grin. My boss says to me "You wanna take this one?" I looked at the guy and said "Nope, I'm done answering stupid questions." He stopped fucking grinning. There's only so much stupidity one person can handle..
"How much is this?"
Or, if they cannot speak English, they sort of wave the shit in your face with a confused look...
Ok, how much is this....that can be an annoying question because when there are shitloads of signs stating that the ENTIRE STORE IS $4.99 WITH NO EXCLUSIONS, it's kind of hard NOT to get annoyed. Honestly, I'd like to say "How much is this? Why sir...it's full price. Didn't you know? It's opposite day! Like in that Spongebob episode! Yes!"
"Can I return this? So there are no returns?"
Once again, POSSIBLY a valid question. But if you are a customer and know ANYTHING about stores closing...you will know 99.9% of the time we will tell you NO. NO! NO! NO!
This is even MORE obnoxious when there are 418 ALL SALES FINAL signs plastered about the store. In strategic places...such as the cash wrap where you are checking out and asking that very dumbass questions...such as...the fitting rooms. Can't get much clearer!? If you want to return something that you purchased for $4.99, you will likely get your throat fucking slit by me. MMkay?! I have gotten into many fights about this ALL SALES FINAL thing. Like it's so fucking hard to get. "But I bought this before all sales were final." Sure, we probably could've taken her shit back but ya know....NO! Lol.
"Wow, what a deal! You should be giving ME money. Har har har!"
You're not the first to try to be funny.
You're not the last.
SHUT THE FUCK UP.
"Are your roll racks for sale?"
Because of the fucking signs that say FIXTURES FOR SALE. Which technically...a rolling rack is NOT a fixture lol. Technically! But anyways. This annoys me because every day all day people are asking. Even if we did put up a sign that said NO WE ARE NOT SELLING ROLL RACKS. People would STILL fucking ask. Why in hell would we sell them to customers first and not other stores in the mall? Stupid fucks. Go to fucking Walmart and buy a cheap plastic one. SAME FUCKING THING. Douchebags. The other fixtures, they don't even want to pay anything for them! They are expensive ass heavy ass mofo fixtures and they want em for dirt cheap. Ugh. I hate haggling. I really do. Whatever. The shit doesn't go, it goes in the fucking dumpster. Or the scrap yard. Bahahahaha >=) a little extra bonus for moi? Hah.
"Why are you closing?"
Nunya. That's why. N-U-N-Y-A FUCKING BUSINESS BITCH! EVERYone thinks it's "because of the economy". They just assume. I wish people would think before they speak. Ever think that maybe stores do close for other reasons? Such as they just don't want to be part of the company any more? A lot of stores are licensed through companies. Whatever... people aren't smart enough to actually think. They just see a store closing and think O MY GAWD, THE ECONOMY IS SO AWFUL RAHRAHRAH. Well it's NOT actually! People are DEFINITELY spending money in the malls. Fools.
You know what happens when you assume!!!
"Is your store just moving to a different location?"
Yeah you dumb fuck. We're moving next door......so we're LIQUIDATING our entire stock for FIVE DOLLARS you fucking douchebag. If we were "moving" wouldn't we "move" the fucking stock we have? Instead of getting rid of it for nothing!? OMG! PEOPLE JUST DON'T THINK!!!!!!!!! Seriously! This is an epidemic!!!!
Last but not least......
"Where will YOU be going?"
At first I was irritated that all the customers would react after they realized we were closing, in this manner...
"Oh no, where will I shop for my teaching clothes?"
"This is my favorite store! I come here at least once a year..."
"Oh that is just GREAT. GAWD."
I was like... what the fuck? Where will you SHOP? Where will I WORK!? For reals! But then you know, after a while, people started actually being concerned with where we were going. Either "concerned" or just fucking "NOSY"...or they wanted to stalk us at the NEXT crappy store we were going to. So now when people ask where I'm going and if I'm going to another store I tell them I'm retiring from the malls. I tell them I just can't stand it anymore. Usually they just smile politely and leave. Then I get some people that actually understand how retail is. Those are the nice customers :)
That's how I will leave my rant. On a nice note for once!
Only because I'm fucking DONE with this god forsaken mall. Again.
BAHAHAHAHAHA WOOP WOOP *does a jig*
Sleep tight my little Retail Sluts Whores and Droids,
Xx Regan

I wish my store would close down...some days it feels like that's the only way I'd ever get out of that freakin' place (cause I'm not one to up and quit without a backup and I've yet to obtain one) There's often rumors of this place or that place taking over or shutting us down but the mgrs say we're the best store in the company (I think the mgrs are BSin' us to make us think we're part of something special) We can't possibly be all that great seeing as they in the next sentence say we've been having losses compared to last year for about 6 months now. Oh but our losses are the least of all our stores...ooOOooh! *beams with pride* I guess we're the best of the worst...or something like that. :P

I know how you feel. I waited 6 years for it to close LOL! But then I hate to admit I got a LITTLE sad. Or rather, nostalgic. B/c I will miss the ppl I worked with. Even though they're my friends and I will see them still. But not every single day! But then again it gives me a chance to get OUT of retail.

You guys should post the most annoying "jokes" that customers recite when trying to be funny. I'll start you off...

"There's no price on it? Does that mean it's free?"

I refuse to even respond to that with a facial expression anymore. Do they really think they're being original?

I worked at a couple of fast food establishments in my teenage years.

I remember people always asking for burgers that other joints sell. For example, if you work at Wendy's, some jerk-off will say, "Can I get a Big Mac?"