Ornaments We Love
Mannequin Ready for the Holidays 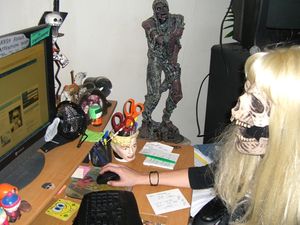 With the holidays here again, I thought I'd share my favorite holiday story from working online retail. This story happened to a former coworker:
The setup: It's 5 days before Christmas, delivery companies worldwide are in overdrive trying to get people's stuff delivered on time. Delays inevitably develop (last year we had to deal with an entire 'brown' delivery truck full of our stuff catching fire, burning all the presents inside inside to slag. Really!).
My coworker "Dan" gets a call from a customer who had just checked the shipping company's website, and found that her son's XBox 360 wouldn't be delivered until December 26th. Therefore, since we were the company she had handed the money to, she called us to bitch. Though we had handed the XBox to the shipper in plenty of time to get it to her (it f-ing left the warehouse the day she ordered it), delays in the shipper's overloaded system had caused the package to be bumped to the day after Christmas. But, it was, of course, all our fault.
"You've ruined my son's Christmas!" she screamed so loudly that I, a few desks down, could hear her. "I want you to personally tell my son that his present isn't going to get here on time, and that he's not going to have a present under the tree on Christmas morning!"
Dan stammered, tried to reason with her, but it was too late, the child was on the phone.
"Hello?" a voice said, sounding about 12 years old.
"Hey there buddy," Dan said, as up-beat as possible, "I'm really sorry, but your XBox 360 isn't going to get there until the day after Christmas."
"I'm getting an XBOX 360?!" the boy yelled, exploding with excitement.
"Yeah, but it's not going to be there until the day after Christmas." says Dan.
"I don't care! I'm getting an XBox!!" the boy shouted, and handed the phone back to his mother.

See, sometimes kids turn OK even when raised by total morons. That is so awesome, it's restoring my faith in humanity :-)

I dunno why...but I sorta feel sorry for the kid. Makes me wonder what mom said to him when she hung up the phone.

Talk about a Bitch Boomerang!

What I've always loved about the story is how obsessed she was about making the whole "presents on Christmas Morning" thing just perfect, and the kid couldn't care less, he was just excited we was getting the thing. Also, it's fraking hilarious that the mother spoiled the surprise herself.

I remember when the "Brown" truck caught on fire. Either something similar happened where I worked, or we worked for the same company.

The worst thing about piggy callers is hearing "Are you American? Do you speak English?" I hate it when it is the first thing out of their little piggy mouths, even after you have just said "Thank you for calling _____ How can I help you today?"

Your coworker should have added "...and if your mother had ordered it a couple of days earlier, you would be getting it on time too!"
:-P

HA HA! Parents often forget that its not the perfect 'Christmas Morning' scene the kids care about by that age. By the time the kids are that age, having the grandparents kick them out of their room so they are sleeping in the basement on a leaking blow-up bed isn't so much fun anymore, and they'd rather just get a gift card and shop for themselves. In fact, my ex used to just let me buy a couple of small gifts and then drag the kids off to the after-Christmas sales to buy the kids what they wanted while I stayed home. Whatever.

I've always felt that Christmas was for the children anyway. That kid probably wouldn't have cared if the XBox was even two weeks after Christmas. Parents often get so frantic and worried over a holiday that is supposed to be about family and celebration.

When did Christmas start becoming more about getting cool/trendy presents than giving truly needed gifts away to the ones who really need it? When I look back on how many presents I really got each Christmas, it makes me feel so selfish that I never gave more to the less fortunate of my community.

That's why I stopped celebrating Christmas. I'm not particularly religious, so it wouldn't bother me one bit that my children didn't get any presents around the holidays. Today's generation is just being taught to be greedy. Not all of them, but still a majority. So much so that people will crush someone just to get a stupid Barbie doll.

Don't we have some sort of award we can give to the kid?

pharmacy_psycho, I don't think it has much to do with religion. I'm really religious (as in, "religion is a big part of my life" not "I want an excuse to be a bitch") and I've just about stopped celebrating Christmas for the exactly same reason as you. Where did we get the idea that Christmas is supposed to be about driving yourself crazy shopping and begging and being generally stupid, anyway? I would much prefer to spend the holidays relaxing... oh, and going to Christmas eve candlelight services. I'm a sucker for those.