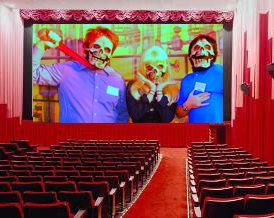 I am concerned for the future of humanity.

Our theater has a long ramp that leads from the doors along the front of the lobby and right up to the box office. It keeps long lines inside and makes getting into the theater a lot easier on the seniors (and we have a lot of those.)

There are also stairs that go straight up into the lobby, and spit you out facing concession's blind spot rather than the box office.

We recognize this is a design flaw, and so use red rope 'fences' to make a line, so that the stairs lead to the exit doors and the entrance feeds strait to the ramp. You can not get in the exit doors.

I can't tell you how many times we here *bang thunk* as some numb-nuts yanks the exit door with all their might instead of reading the flipping words on the door and trying the entrance doors instead.

Today, I watched a couple walk in the entrance doors, STEP OVER THE ROPES without apparently even thinking it was somehow wrong, reach the top of the stairs, and then look around in confusion wondering where the box office was.

And then they nearly cut in line because they wanted to stand at the funny angle from which they approached the box instead of head-on like all the people who walked up the right bloody way!

Ropes? They are there for a reason! You don't walk around the ropes in a museum so you can play with the exhibits! You don't step over the ropes in the bank blocking the wide-open vault, or to get into a club! Why would you walk over our ropes???

And I'm pretty sure they still don't know how to read.

(as in why do they add an invisible E to my name and call me kate all the time? wtf?! LEARN TO READ!)

Ug I know how you feel. I work at a movie theater where we have one stop shop. Meaning you can buy tickets at the concessions stands too. This means during the downtime our box staff usually go on break and then help clean theaters until it gets busy.
We have a large sign that gets put in front of the entrance to the box office lineup that says "Box Office is Closed. Please Purchase Your Tickets at Our Concession Stand" (if the line is built properly you can also pull a rope across but that hardly ever happens) but people will still walk through the doors, see the sign in front of the line and just move it out of the way so that they can walk all the way through the line(it's made one of those sort of S shaped lines) and then stand at the counter looking around vacantly because no one is there to serve them. Or they will look at the sign in front of the entrance and walk all the way around the line-up even though they can clearly see that there's no one at the counter.
I really wish people would just learn how to read.

New drinking game! A shot for each doodlebrain to try to go in the out doors. This would be a very good game for those of us at my store when we're stuck standing at the doors hawcking credit or reward cards...it would help passs the time and keep us warm from the frickin cold when the doors open.

Our theater is right next to a Billiards and Bar, if we played that game...we'd probably get our food for free XD
Every night would end smashingly!
Every morning would be painful.

I work at a museum, and unfortunately, I can tell you that people DO walk around ropes to play with exhibits. Even exhibits that have "Out of Order" signs on them in addition to the ropes. :/

We form the shape of the checkout line at my store with those standing posts with the retractable bands. We even mark the entrance to the mini-maze with two signs that say "Enter Line Here" with arrows. And at the end there are two signs that say "Exit Here, Have A Good Day" and yet I still have people walking in ass-backwards, WHILE THERE ARE ALREADY PEOPLE IN LINE, and stare at me with that uncomprehending expression when I say that the line starts over there. DUMBASSES!!!!

I noticed that at my grocery store, they took down the little retractable tape barrier that said ENTER and EXIT at the service desk. I'm guessing they finally just gave up on trying to get people to follow simple directions.

Some of the grocery stores in my town block off one of their entrances after 10 PM by putting a line of shopping carts across it, leaving just one entrance open (I don't know why). Now I wonder if they get the occasional idiot climbing over them or pushing through them!

Curious, has anyone ever experienced someone shortening your name when your nametag reads one that is already a shortened version of your name?
Since when did names like "Nate" get pronounced "Nat?" And then the poor excuse making the custy sometimes does, like "Oh I heard it pronounced that way one time" or "In my old country we pronounced names like that."
I call bullshit. [/pointless rambling about pet peeve]