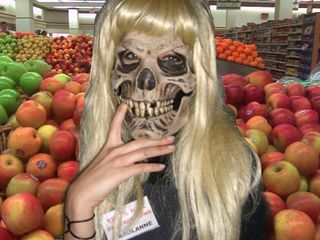 Sadly I am not referring to our store manager. I put "sadly" because this is a terrible joke, and it was old when Groucho Marx told it. (And no, I'm not going to title this piece "Veggie Tales" or "Fruit of the Loonies" either. Deal with it.)

Like many grocery stores, mine has a fruits and vegetables section. I used to like the sign "Fruits & Vegetables" hanging near the ceiling because from my vantage point, chained to the register, I could only see "VEGETA" and could pretend he shopped here. (If he ate like Goku he probably had a weekly bill of... OVER 9000!)
Anydangway, until about ten years ago, whenever new register recruits were trained, they would give them a list of all the PLU numbers for all the fruits and vegetables, and tell them to memorize it. Also, this list is there at the registers where we can look the numbers up in case, you know, we were human or something and couldn't remember them.
About ten years ago they gave up on trying to get anyone to memorize numbers. Which means that I, having been there longer than Dragon Ball Z was on the air, get asked by everyone, "What's the code for Curved Yellow Fruit?" and other such innuendoes. Ahhh, it's nice to feel wanted, even if it is only on a poster that reads "Dead Or Alive: Checker -- Wanted for Possession of Numbers -- Reward Not Offered."
I would go into detail about the PLU sheet being inaccurate, having the wrong or missing numbers, or about all the times there were arguments between myself and management about the correct numbers or item description, but those are volumes of the book waiting to be written once someone sends me the advance 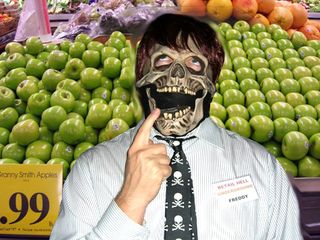 check.
Meanwhile, in Recentville, as I have said they have given up on training anyone to memorize numbers. But now they are concerned that we are not typing the numbers correctly, or using old outdated ones. So now they have begun... (drumroll please...) THE TESTING! (By Stephen King. Book advance probably over $100k.)
It used to be, when training us retailheads for fruit detail, they would pile some fruit on a table in a back room and quiz us on individual pieces. You'd think this was really silly! Sure, bananas, lemons, oranges are EASY, but what's the green fruit with a buttcrack in it? Chayote Squash. (I also used to know the number, but I haven't rang up one of these assfruits since 1994.)
But now they have started testing us-- weekly-- with pictures. Printed pictures, in blurry fractured JPEG, of what might be fruit if someone could adjust the damn tint control.
What I know is this:
1. I have been consistently scoring fewer than 25% on this.
2. I don't give a rat's irregular bowel movement about #1.
3. THE TESTING! (which by law must be mentioned thrice, exclamationed in all caps) does not seem to care if we are right or wrong. Or if THEY are right or wrong.
4. An illegible sticker probably means it's an organic item and should get a "9" before it. Unless it's on a grapefruit, for which they always have stickers on them in the pictures (mainly because they all look alike) in which case all sanity goes out the window and I should put "ce n'est pas un pamplemousse" on the picture. Of course, reality dictates that ALL fruit have stickers on it, because nobody has memorized the bloody annoying numbers!
5. I am getting sick of looking at little green blobs. I might vomit a little green blob myself. Last week I actually saw a chayote squash! I thought maybe they had gone extinct by now, with management driven to desperate eating measures owing to nobody remembering the PLU of one. 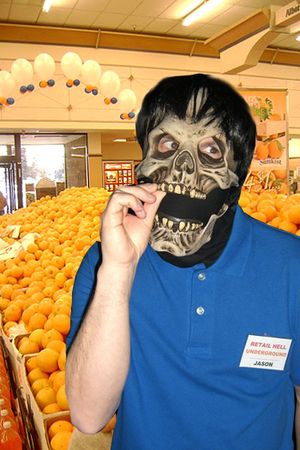 6. Here's where it gets... well, not more interesting, but I'm on a roll. (PLU 7725). The test "questions" (which must always be stated in the form of a blurry fruit) which were left to right, are now in the order of top to bottom. And it may have been that way for a couple weeks before anybody bothered telling us. But WHY?!?!?!?! What purpose would it serve to grade the questions in this ridiculous manner? Are we living in Japan now? Next it'll be in a spiral outward from the center, and maybe I'll accidentally get some questions right.
7. I swear, they must have set the picture quality of the JPEG to "1". I assume they had to send THE TESTING! (there's the third one) weekly email to 1,000 stores, and I suppose saving 2kb per pic adds up, or subtracts down. But I've seen the email memos they DO send with really good quality pics on them, which say "Don't take these fraudulent coupons!" Those suckers have to be up to 6 at least. Shows you money talks, or at least can count higher.
8. I have made my case to service desk personnel about the frivolity and unnecessary testing of us where the answers are wrong, the questions are wrong, there's no penalty for being wrong, and I haven't rung these items up in years. They shrugged and just said, "Corporate mandated". Isn't that the Official Excuse of the Nazis (tm)?
9. I have been taking to answering questions with "Picture too blurry! Can't you do any better than that?" or "Some sort of green fruit shaped like an ass" or "Not in the list so it should be on the sticker anyway."
10. Oh yeah, they provide everyone who takes the test with the PLU page as a cheat sheet and expect us to identify our attackers in the lineup. "THERE he is, officer! THAT's the tomato that caused grievous bodily harm by splatting me!" Only problem is, some of the items aren't ON the PLU sheet. Way to go, everyone. Let's just chalk up the whole store with faildust, shall we? Dump the whole thing in the trash and see if a chayote paws through it. 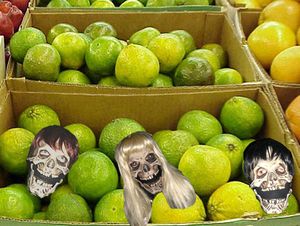 11. I've been avoiding taking the test whenever possible, forcing them to drag me off the register at inopportune moments for them, to get me to take it. Last week I got all the way to Friday but then they cornered me at the start of the shift. This week I have Friday off, and I might call in sick Thursday, so we'll see who wins this round!
Of course I know more than 11 things, but I have to stop before Freddy re-titles this one TL;DR (Tested on Lettuce; Doesn't Remember).
I will close by stating that, when I enter the wrong PLU, it's because of any number of factors (description vague, wrong number on sheet, wrong sticker on product, typing error gone unnoticed, etc.) and not because of malice towards the customer. But for some strange reason, these factors are ignored when management wants to pass out blame. Well, this new testing is the straw that will break the cantaloupe's back! THIS WILL NOT FRUIT STAND! Next week I'll just put things like "Same as last week" and "What do you care?" and "Corporate mandated".
Eric

Unnecessary testing of fruits and vegetables drives me crazy. My boss used to do this to me, until I corrected her during a test. Ha! Never again since.

Also, she hasn't done it since, because I'm the only one who knows the code for lychee nuts offhand.

Our company has a computer training testing program that has like 25 different sections for different categories of produce (citrus, apples, squash ect) and each page has three items and a name/number for an item and you have to pick the right picture...now can anyone on the great-grey-green-greasy earth tell what an Organic tomato looks like just from a picture as opposed to a Hydroponic tomato? No! Of course not! And they keep wondering why people are failing these things.

Everyone should know that one. Hydroponic tomatoes have wheels and a V8 engine. :)

I'm guessing my local grocery store doesn't do this. Actually I'm guessing I'm the only one who ever buys any produce there. A few months back I was buying zucchini and the guy rang it up as cucumber. When I corrected him he was totally confused and tried to tell me that there was no such thing as a zucchini and accused me of messing with him. If I'm buying something obscure then I expect them to ask exactly what it is but how does one get to be an adult retail slave without being able to identify common veggies?

Oh the dreaded plu numbers. My store does have a booklet for us, without pictures. Bulk foods are the worst. I do know about half of them, gummies, almonds, Hersey chocolate, pick and mix, etc. But weird obscure things? Nope. Then to add insult to injury, the customer will have the white tag attached to the bag...without the bin number! Then you try to ask them what it is, they don't know.

I bet that cucumber was cheaper than a zucchini.

None of my supervisors know the PLU numbers. When one of them *shock and awe?* has to get on a register they end up asking the nearest cashier, thus slowing someone else down, instead of finding the chart which Malmart provides. Of course, these charts don't have half of the produce on them, but who cares? Just approximate! Ask the customer how much it cost, they never lie!

On a related note: there was a survey going around facebook which asked "what do you think of when you read the word 'cabbage?'"
4069

I think "Corporate Mandated" is the correct answer to every part of THE TESTING!

Then they might see that THE TESTING! Is just a way to waste your time on their dime.

Assfruit! omg, I looked it up, I laughed, I cried. Thanks for the morning giggle.

totally looking for a green fruit with a butt crack in it when i go for my lunch today at the store! =D

Why is the sugar in fruit so much healthier than processed sugar? If I
eat an apple that has, say 1 gram of natural sugar vs eating 1 gram of
processed white sugar, why is the sugar in the apple not as bad for
me? Don't they both contribute to sugar in my blood as well as sugar
on my teeth?

That was quite epic.

the Over 9000 remark made me laugh for an hour. seriously.

This was way back when you had to type the price in the register.....
Good old days

But seriously, at my job we have these Internet-based tests we have to take every so often on produce identification. There are huge flaws in this.
First of all, they only test us on items that are either really easy to identify or ALWAYS have a sticker on them. Like, for example, different varieties of apples. 999,999 times out of 1,000,000 there will be a sticker on the apple stating its variety and PLU code. Easy as pie.
Second, the pictures are (as you said) bad quality, so the navel oranges in picture A look exactly like the blood oranges in picture B. The only discernible difference is that in picture A, the oranges are in kind of a pyramid shape, and in picture B, they're just kind of in a lump.
Oh, and they never test us on the weird shit. Bok Choy? Tomatillo? Kiwano melon? Endive? Calabacita??

Awww, I love your sense of humour, man, especially the DBZ references!

We used to have PLU numbers too (everything's on a stubborn touch screen with pictures now ;P) and when I didn't have any customers around I'd look through the list to try and remember numbers. I kept coming across things I'd never heard of (What in Arceus' name is "dudhi?"). Sometimes I even had to ask customers what on earth kind of fruit they were buying! How embarrassing...