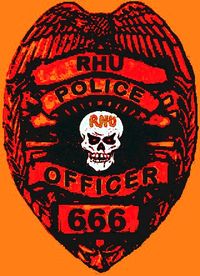 I had to stop by and tell you what happened last night during my strangest pull-over in a long time.

I get behind a motorcycle and the first thing I notice is the tag is wrong.

My three years as a cop experience?

My amazing attention to detail?

Huge because it was designed for a CAR!!!

Many of you may know that a motorcycle tag is small so that it fits properly. Oh, and the first two letters of this tag were TL meaning that it was actually for a trailer. Sure enough when I run it, it comes back as a 1998 homemade trailer. I don't think Harley-Davidson would appreciate that.

So now that we have this guy's common sense measured its time for the stop. Hit my lights, he stops and immediately jumps off the bike. Uh-oh somethings wrong, he's gonna fight or shoot or something. Nope, takes off his helmet and chunks it at my windshield then lays on the ground with his hands behind his back.

At this point I'm halfway out of my car with my gun half out...confused as hell.

After the cuffs go on I ask him if he was trying to hit me with the helmet and maybe just missed. He very politely told me, "No sir I wouldn't do that to you, you're just doing your job. I was just pissed off."

Turns out he didn't have a motorcycle license, which could have been handled with a ticket and he would have been on his way home. The crack in my windshield from the helmet, however, resulted in him going to jail.

We call this job security. Never an end to the dumb ones...but you guys already knew that huh.

Well, at least he was polite about it with the exception of pitching his helmet at your car.

At least where the cops are concerned, acting like an infant can land you in jail. If only this could happen in retail...

if only he know that you meant him no harm

I am always overwhelmed by these people who turn a simple violation into an arrest because they can't control themselves. I hear about it from time to time, and of course they love to show similar incidents on television.
If you ever watch one of those police chase shows, many times the driver in question had just run a stop sign and would have received a $50 ticket, but instead they tried to evade the police officer and wound up in jail.

I live for COPS! I can't wait to hear more stories. People do the stupidest things because they simply don't think, and the jail is full of the rest of the people who thought they could get away with it. I'm sure your job is the most interesting on the planet (next to emergency trauma surgeon).

You have to wonder why he thought the giant car license plate would be less noticeable than not having a bike plate... :)