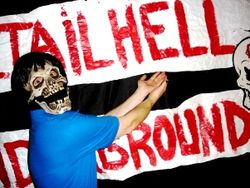 RHU Police Officer back with a tale of a hell spawn.

Actually I'm a Deputy Sheriff. I also work in a rural county which means we do it all. Over 200 square miles of pure joy and entertainment. Recently I was called to a local store that sells video games.

The manager caught a kid trying to steal a game, and stopped him by blocking the door. Of course the kid won't admit he stole anything, and the manager can't really do anything to him.....so its my job.

When I walk in and see a 12 year old boy dressed in baggy clothes and his hat turned sideways (whoa...almost broke into the pants on the ground song). Anyways, a complete thug wannabe spawn.

The manager told me what happened and offered to pull the video tape. It wasn't needed. I could see the game case outline under the boy's shirt.

Me: Where's your parents.

This kid speaks English. Its obvious that 1. He walked here from home and 2. If he ignores me one more time I'm not liable for my actions.

Me: Dude give them back the game. I can see it under your shirt.

The inner me is picturing me tazing the kid, taking the game, the dragging him home. Is that bad?

Me: Look, either you hand the game over or I'll take it from you.

Thug Spawn: You can't put your fucking hands on me!

I don't know if to be happy he's not ignoring me or mad that he's cussing me out. Either way I love it when people think they know the law and think they know what I can and can't do.

I threw the kid in the back of my car, ready to take him home.

Me: What's your address.

I eventually figure out where he lives and take him to his parents. Of course, the parents are more pissed off that I put him in the back of the police car than the fact that he tried shoftlifting.

Ohhh just wait till I see them driving.

you know that is a real badge number.. i got pulled over once by a state trooper *i live in NJ* and the trooper's badge number is 6660. i died laughing at that one.

I'm sure this isn't the last encounter you will have with that thug-brat. Let's hope he runs and resists next time so that you do get to taze the little asshole. Better yet, I'm waiting for the parents to call and say their car has been "stolen", only to find out it's this little jerk. Nothing like starting off on the wrong foot.

Ahh hell, if my or my brother had been caught shoplifting at 12, you'd need the cop to pull my father off my ass.

While my parents were light drinkers, and they never hit us out of anger, they did ground us and take away our shit if we misbehaved.

If I showed up at home in the back of a cop car cuz my sorry ass stole something (or I had been arrested) my father would have whipped out his belt and had it beating my ass so fast I'd be pleading for him to stop.

The one and only time I ever got a beating from my father was when I stole a couple magazines and a soda from a local gas station when I was 7. We'd already been told how shoplifting was wrong, don't do it...and we were expected to behave our selves at home and in public.

When my father found out what I did, he beat my ass so bad I still have scars (have to look close enough.) Man, did I learn my lesson.

But that did teach you something, didn't it Hiedi? "Gee this HURTS I better not do it"

I'd get my OWN ass beat for stealing (had I ever stolen) or any other misbehaviors in a store.

This is why I don't want any kids. I can't beat their asses if they steal shit, I can't do ANYTHING to them or "the poor angel would be scarred for life!!!"

Really? Why would he try to steal a game?
Hello? Sensormatics.
What a moron.

Also, aren't there no games in the case? Unless it's not a gamestop.

Thank you for your service. Seriously I started working at a major retailer 1.5 yrs ago. I have never worked retail. I was an engineer for 13 yrs and now I am attending college again. I have had to stand by while trash like that steals and God knows where their parents are. I can't wait till this summer! Why can't school be year round? Also why is it white kids try and be like black rap stars still? Didn't that go out a long time ago!

LOL whenever groups of kids come in the store either myself or my boss will grab the phone in the office & page for a security scan.. i'm a 5'1'' white female. i'll walk the store and stand near the kids and ask them if they need help finding anything & make my presence known. i've also (for fakes) had a co-worker dress down & pretend to steal & "caught" him & kicked his ass (really just over-exaggerated wrestling moves i learned from all the years i watched fake professional wrestling (wwf/wwe) as a kid) in front of a group of regular kids whom we've suspected many times of shoplifting. has scared them & now when they see me they get what they came for, pay & leave. LOL

Jesus! My Old Man might have had his faults, but he would have broken his foot clean OFF in my ass if I'd been caught shoplifting.

Oh hell yeah, I would've gotten smacked if I had ever done that! But you know what, I never did, because my parents taught me that it was WRONG. Honestly, I feel ashamed of my people in my own generation because so many of them seem to have failed in raising their kids. It's all me-me-me and "I want".

Those idiot parents deserve every minute of miserable hell that little bastard is going to put them through! Keep us updated as to his future "adventures".

i have a question? if the kid was shoplifting why wasn't he arrested? Or at least taken to the station and made to wait for the parents and everyone gets lots of lecture?

Ah, youth. It gets worse and worse as the years go by, I'm afraid. My dad can be a pushover, so I doubt he'd do anything if we stole anything, but my mother terrifies me as it is. If SHE didn't smack the all-mighty crap out of me, her husband, my step-father, would. Guy's a huge body builder. I hope the parents change their tune when Jr. McThug-Liaf runs off with their car or about 200$ out of their wallets without permission. I'm so glad I didn't give my parents trouble growing up, unlike a lot of kids that are growing up today. Keep us posted, Badge!