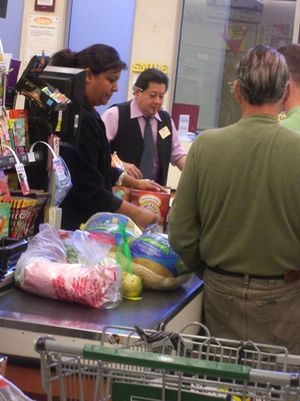 I work at a well known supermarket chain with horrible yellow shirts and the motto "just lower prices" which is owned by the Westons, so call me SS Slave.

I work the most "wonderful" part of retail in the store, front cash. As anyone who worked front end as well, you know the joys of lazy, slobby custys who are blaming you for the prices, the fact they can't find anything unless it's right in front of them or the fact that the truck with their precious Oreo's hasn't come in yet because of a massive snow storm.

But this is not a rant about a specific event, this is a rant of nearly a year's worth of idiots. So here are some tips for future custies:

1) Don't throw your shit on the belt with no care and expect me to treat everything as if it is made of glass. If you don't respect it, neither will I.

2) I'm human, I can only scan and pack so far so stop your huffing and whining, if you're in that big of a rush help me pack the bags.

3) Keep your fucking spawn under control. I can't count how many times I've had screaming, crying, bitchy kids in line and parents not doing anything, just standing there, reading a magazine while their spawn tries to tear apart everything they get their hands on.

4) Get off your fucking phone. I don't have time to ask your 6 times how you would like to pay and I don't want to hear about the awesome sex you had last night when you were like totally trashed (yes, this did happen)

5) Don't wait until I'm done with everything to start putting it back in your cart. I run out of space really fast.

6)If you buy a ton of cans, don't bitch to me that your bags are too heavy. You picked the cans, you put them on the belt that way, I pack 'em as I see 'em.

8) I plan out how I pack things, I know how much can fit in your bags, don't rip the bags out of my hands snarling "you're going to make it too heavy". I will then make the next one extra heavy.

9) Do not pay for an order with 100's of gas/pharmacy points. It really pisses us off.

10) We used to charge for bags to promote environmental awareness, 5 cents a bag, for most people this was never more than 50 cents extra on their order. You would think that we were charging $10 a bag with the rate of complaints. I don't set the policies, I just have to do what I'm told. It's not the end of the world. If you don't like it, go shop at Sobeys or Walmart. I don't give a shit cause I won't have to deal with you anymore.

11) When I ask at the beginning of an order if you need plastic bags today and you say no, don't stand there like an idiot, pass me your damn bags!

12) No, I will not check the price of every item you chose, that's what the signs are for.

13) I have no idea why we are out of an item, no there is none in the back, yes I'm sure we're out, you can get a rain check from customer service, no not from me c-u-s-t-o-m-e-r s-e-r-v-i-c-e. Over there, 10ft away under the giant yellow sign that says Customer Service.

It's been a long day, next post...."Colleagues" 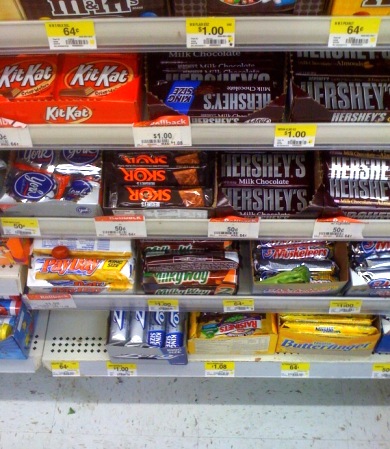 From Heather: "I witnessed piggy reject firsthand yesterday while picking up a few things. Usually, I see the normally missplaced odds and ends, but 1 cherry tomato and a small piece of broccoli? Haha. What the?" 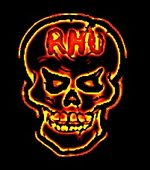 Today I went to a certain restaurant and I was NOT "lovin' it!"  I ordered an angus burger with bacon.

The cashier asked me, "oh you mean a bacon cheese angus burger?"

I said "Oh, no thanks, I don't want cheese on it, just bacon"
To which she rudely replied "Ma'am, no. Your choices are a bacon cheese burger or a regular angus burger."
Me: "Uhhh...ok.  I'll have a bacon cheese angus burger without cheese."
This goes back and forth a few times, and finally she heaves a huge sigh, and punches something in the computer.
I get my burger, I leave and go home.

Open it up and see cheese melted all over my burger. 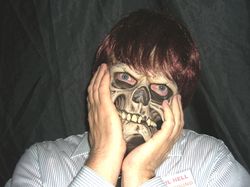 I have since moved on from retail work, but I do remember the suffering. This story is gross, but still funny. I worked in a bookstore, one of the big chains but without the well known fancy coffee. My co-workers were *fabulous,* and so was my manager, but we had some very strange customers.

One day, I was re-shelving books in the science fiction section, helping customers in between, cracking jokes with the shift supervisor, Mike, doing my thing. I went to put a book back and discovered, much to my chagrin, a buffalo wing bone on top of the books. As in, the meat had been eaten, and the bone was just chilling on the books.

Shocked (this was my first and thankfully biggest gross out incident), I scrambled back to the information desk for tissues. I grabbed a handful, ran back to the shelf with the bone, and removed it and two of the books stained with sauce. The bone was cold, like it had either been sitting there for a while or someone had come in with half eaten food and just decided to dispose of it in the science fiction section.

On my way to the trash can, Mike stopped me and asked what was going on. I explained, and he made a face but then got called to the registers.

I took the box of tissues and patrolled the section. I found no less than FOUR chicken bones.

In various places on the shelves.

I cleaned up, disposing of the bones, and went back to work. Mike and I ended up laughing about it, but seriously, who does that? 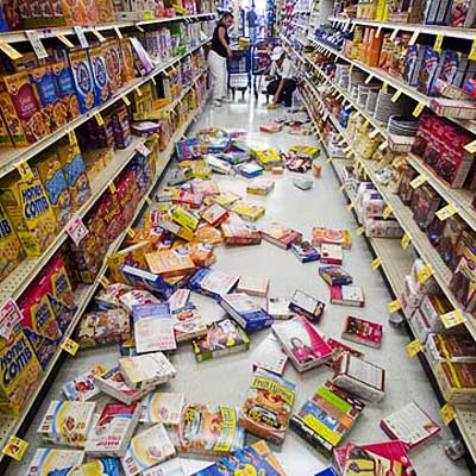 Yesterday was my day off from work and I went to do some shopping at Walmart and...the enclosed photo is what I found in one of the aisles.

I went to the two poor retail slaves and said I am SO sorry you have to clean up after some jerk. The poor slave, who was pissed said it what I saw was the doing of a black lady's two  children.  They were being little turds, running up and down screaming and being brats and she just ignored them.  I told her I was so, so sorry that some people are unable to parent their kids. 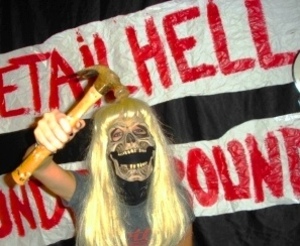 Now, I work in a friendly neighborhood lumber store, which usually has some pretty awesome customers, and I work with some pretty good people too. Despite issues with me being a young university-aged girl who works in a fairly male-dominated industry with mostly male customers, and dealing with the occasional creepy customer who thinks that it's ok to be crude and disgusting to me because I have the audacity to work around lumber AND be a young girl, life is normally pretty good at the lumber store.

However, on Canada's holiest of holy days, the Olympic gold medal hockey game between USA and Canada, life was not so good. I don't even know why we had customers- go home and be Canadian and watch your goddamned hockey. Quit telling me it's awful that I have to work on a day like today and miss all the action on TV. I wouldn't be working if people like you didn't come in to buy shit.

I had one customer come in with his Hell Spawn trailing behind him, making some big deal about how he needed to return something because it was missing a part.

Ok, fine, I can deal with that. I asked for a receipt, and he handed me a slip of paper with the names of the items and their prices handwritten down, with our store's stamp on it.

This was clearly not an official receipt. 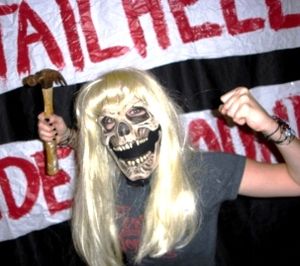 I asked if he had another proof of purchase, as this was not an official receipt. He started getting irate, telling me that this is what we gave him, how dare I question him, it has our stamp on it so how could we say it isn't ours (which is irrelevant, as one of our stamps was recently stolen) etc. etc.

I told him I could give him an exchange on the item only, and he huffed and puffed and finally agreed. I went to go look for the item in question, and because life hates me, there was none left.

I informed him of this, and the dickweed looked at me and said, "Well, looks like you're going to have to give me my money back, now, doesn't it?" and puffed his chest out like the self-important douche he was.

In the background, his Hell Spawn was knocking down items and pulling things off the shelf and doing things Hell Spawn tend to do. His father half-assedly asked him to clean up and the kid threw a fit and started whining for his father to help him fix his mess. I appreciated the irony of his Hell Spawn yelling at him to fix something that wasn't his fault, but it warmed my heart only briefly as I realized I'd be the one who'd clean it up in the end.

I asked again if he had another receipt, as it was possible that another employee wrote that note out for him so he could do price comparisons only, but when he bought the item he received an actual receipt, and he got confused by the two pieces of paper. 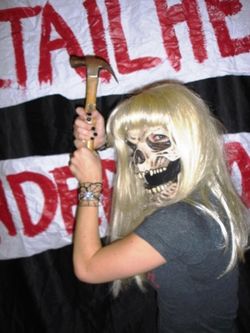 The guy starts yelling for me and my coworker to get a manager, call our boss up, and all that good stuff. We tried calling our superiors, but everyone who had the authority to do something about the situation was at home, in the middle of watching the Olympic game like everyone else in Canada, and not picking up the phone.

We told the guy to come back on a weekday, when there might be someone who had the authority to help him. He yelled again about how he has work on weekdays and we should accommodate his schedule!

NEWSFLASH: Our bosses only work weekdays too. It's why the college kids with no authority to solve your problems work weekends. Retail slaves with seniority don't have to work shitty weekend shifts to accommodate your life.

We offered him a store credit for his items, and he refused that as well, yelling about how he doesn't want a store credit because he never wants to get anything from our store again.

After yelling at us a bit more, the douche yells that he's taking his stuff and never shopping at our store again.

One can only hope.