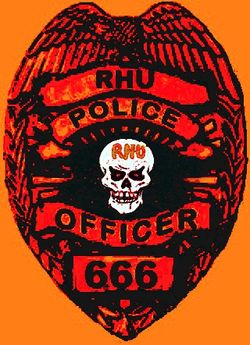 So this happened a few months ago at our local Wally World and seriously....you can't make this shit up.

So I get the call that a woman is being disruptive and refusing to leave the store. So I'm figuring the usual crusty bitch that didn't get her refund or something like that. I get there and she has handcuffed herself to the cart station.

That word gets so old. But still to this day every time someone calls me that I picture a bright pink pig in a cop uniform and it brings a slight chuckle.

Part of me knows she's fucking crazy, but there is that small voice in the back of my head that says she has a point.

Meanwhile, I'm trying to figure out what to do. Remember the episode of Saved By The Bell where they handcuffed themselves inside of the school? Freedom to picket, right? Can she do this? I don't know because now I'm too busy remembering Kelly in those tight spandex.

....Oh yeah the cuffed chick. Well obviously she's on private property so she can't picket here, she's got to GTFO.

Me: Ok ma'am you've got to leave the store.

Cuffed fucktard: This is my GOD giving RIGHT!

Me: Yes ma'am you're right. However before you do something like this you must get permission from the police, and we have to take your fingerprints to be sure you're not a terrorist that plans on blowing Walmart up.

Shut up. I get to have fun with the crazies. Its the only thing that gets me through the day.

Best part is she believed me and uncuffed herself and walked out to my car with me.

Oh, and she was banned from Walmart. Just another ploy for their world domination...get rid of those that are on to them. 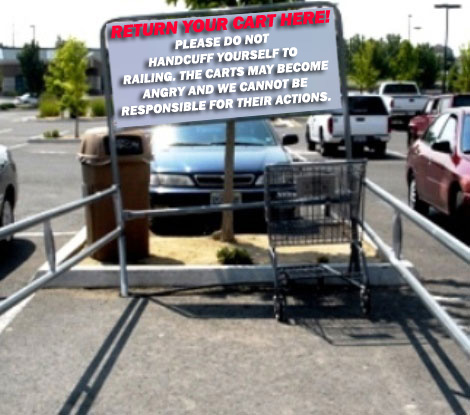 Yeah, OK, they're taking over the world, but what is handcuffing yourself to the cart stand going to do to stop it? Or maybe she wanted to be first in line for their "World Take-Over Day Sale."

Sigh, I wish I was a cop

There's a Greek proverb along the lines of, "From a child and a crazy person you learn the truth." She didn't know how to protest, but she's right.

Anneliese,
I have never heard of that Greek proverb, but it disturbingly correct.

P.S. I love RHU Police Officer, stories. He gets to do things I can only dream of.

If you specified "white woman in her 70's", I would wonder if it was my mother. She's nuts like this.

HAHAHAHAHA! I would have to agree with her about Walmart, but handcuffing yourself inside of one? There are better ways to fight them than that!