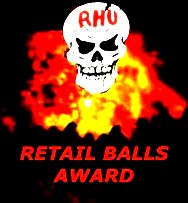 CCC gets a Retail Balls Award for putting a naggy crusty in his place:

Hey guys.  I just found this site from Not Always Right and it's awesome. It made me realize that it's not just my store with the dumbass custys, crustys and kids (although most of the kids at my store are sweet...it's the parents that suck).

And I have a story to share that happened this morning. See, I work at a large retail warehouse well-known for being classy and serving polygamists (it gets mentioned on Big Love).  We'll call it WorstHo, and near My WorstHo a rival company named after a sexual act is opening.

For the past few weeks, anyone we piss off because they don't know the rules has threatened to go to BlowJob's and I'm sick of it.

To top it all off, this morning I found out I bounced a student loan check by 25 dollars and the bank wouldn't tell me if it cleared and I was punished or if they rejected the check because it bounced when I called them from the parking lot at work.

Then this happened in the first 5 minutes of today:

Some Lady: "You guys should have an express lane."

Me: "Hmm, I don't think management will go for it. You know, you're supposed to buy in bulk (smile)"

Two people later, Old Dude wants only one bottle of bleach and is talking to another employee of WorstHo about BJ's.

Me: "Sir, you need to buy the whole box of bleach. It's three containers. Want me to have someone, like John, go grab you the rest?"

OD: "See, this is why BJ's is better. I don't NEED three bottles of bleach, I only need ONE."

Me: "So, would you like the other two, it's the same price." 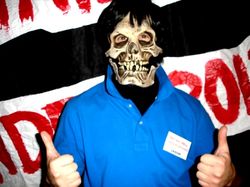 OD: "See, now I'll have to go to another store, LIKE BJ'S, to get a big bottle of bleach."

And then I lose it.

"Sir, if you buy the box, it's the price that's posted and it's not like the bleach will go bad. So if you run out of bleach, instead of running to the store you can open up your closet and say 'Hey, look I've got more bleach!' If you don't want it fine, but I'm not the one that boxes up the bleach. I'd didn't say 'Hey, I'll make everyone buy three containers of bleach' Call Clorox and complain to them. Have a nice day! (Smile)."

He didn't say anything, and I felt better.

A regular who was in line then congratulated me for telling the guy off, and complimented me on my cashier speed (which is both patronizing and makes me feel proud).

Later in the day, I made a lady so mad that she didn't want me to help her.

Just by taking her temporary paper card that she'd had since April 7th and is supposed to be collected the day it is made.  She was so mad she didn't even want someone to make her a permanent card, and they called the person trying to help her rude.

Ha, that stupid old fart won'y be happy when he get's to bull*%#^ jobs and finds out he has to buy 2 giant bottles of bleach!
And anyone who has worked there will tell you it sux just as bad as their current store- but the managers are even more condescending and won't help you!

I never understand why people go to a place that sells in bulk and try to break up packages. Isn't there somewhere else he can go to buy ONE bottle of bleach?

Mimi... if there's anything that I've learned during my two years in retail it's that people are stupid and can't understand deals.