Shitty Custy Vs. Awesome Custy
Walmart Hell: Someone's Been in the Kool-Aid 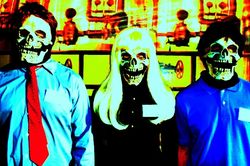 From Then Let Them Eat Crack:

Today is one of the days that make me so glad that I'm medicated, I would hate to have to go to jail because I killed a custy. My day started off fine enough until one of the slaves in the Bakery calls to tell me that four cases of beer have exploded.

Our store always promotes this Summer of Beer, bullshit, and thus we have several large displays of bottled deal-with-custys around the store. Apparently this "lady" let her three demon spawn run around the store and play (bitch McDonalds is down the street and open 24hrs, THEY have the playplace) and they eventually ran into and tried to climb on one of said displays.

Not surprisingly they knocked some over and yes they did explode.

I then had this lady come up, stand in line for five minutes to talk to a manager because our SELFcheck out attendant is RUDE.

(she told her to stop taking bags off the scale, doesn't matter if you think you can, if you work in another grocery store and know it can be overridden, the big red stop sign applies to you too).

Then to top it all off, right before I left for the night I had to call the boys in blue because another "lady" (of the evening I think) came in on everything but roller skates.

I don't think I could get that High if you paid me, seriously. I don't mind if you drink, or do drugs or whatever, its your life, but don't be so coked out that you fall asleep STANDING UP while taking half an hour to ring up a third of a cart of stuff!!

It just irks me that I'm working 40 hours a week, and doing well to pay my own bills and these lazy fucks get OUR money to spend on food so they can spend their own on Drugs.

The winner this week has to be the person who waltzed into our store straight off the cover of Landfill Weekly and was offered a credit card and the chance for $25 in free groceries, her response?

"I'm on Foodstamps, you guys already pay for my food, I don't need your free groceries"

And my nice custys are shocked to find out that I sometimes drink.  HA.  As always:

Screw them all and
--Then Let Them Eat Crack

Like I always say, there is a reason why Summer of Beer is abbreviated SOB. I so wish I had worked Friday night. Wait, no, no I don't.

Landfill Weekly...made me laugh my ass off. I love it.
Hey at least the foodstamp person was honest about who's paying for their stuff!

You know, most people on food stamps aren't freeloaders. They're single moms trying to feed four kids on minimum wage; or they're disabled (and yeah, that includes invisible disabilities); or they got laid off and are trying to find a new job; or they're retired. A family of four usually gets about $150/month or thereabouts in food stamps--that's not some kind of motherlode. It's about $37 per person, just over a dollar a day. It means living on oatmeal, mac and cheese, and canned soup.

I used to volunteer at my town's food pantry, and I estimate that about 1 in 100 families were actually freeloaders. The rest were people honestly going through hard times, needing to keep their stomachs full so they could keep looking for work and spend their money on their heating bill. We got a lot of clients who were coming directly from the job-search center and vocational rehab offices down the hall.

Every once in a while, we had people who I knew were probably being freeloaders. I remember one man who reported getting $300 in food stamps for himself, his wife, and his child, and asked for food from the pantry besides. That man was being a freeloader. Most are not like him. Most of the clients were people who went through tough times, used the food pantry for a few months, and then got jobs. I see one of our clients every week when I go shopping. She's a Wal-Mart greeter, she does a good job, and they don't pay her enough.

Don't let the 1 in 100 people who abuse the system convince you that the 99 others are exactly like those douchebags. They're just not.

Ugh... Callista, I've actually rung up some of the freeloaders. I had one customer come through buying caviar, 3 pounds of king crab legs, shrimp, and a bunch of other things using her food stamps. It was the beginning of the month and she had $38 left after that order... she better hope that food lasts her a while.