Riferous: Return of The Stupids 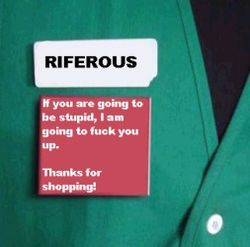 Remember that Tom Arnold movie, "The Stupids"? Well, it's ok if you don't, there are countless millions in the same boat. The premise is that Tom Arnold's family name is Stupid, and the Stupids are, well, stupid.

I think they are filming a sequel.

How else to explain my Stupid Sunday?

I started early filling tie ins, many of which are condiments and thus come from the same aisle.

In this aisle is a woman who, while standing behind her cart, takes a jar of jelly off of the shelf, and then, seeing me coming (I am very large - you can not miss me), walks around her cart to put it in the basket, completely blocking the aisle.

Not long after, in the same aisle, I am going for steak sauce and tartar sauce, which are about six feet apart.

I follow a man all the way down the aisle who stops, you guessed it, right in front of the tartar sauce. His cart, which he pushed a couple feet in front of him, is blocking the steak sauce.

He proceeds to not just look at the barbecue sauce near the bottom shelves, but to also take a knee and start examining the bottles.

My Front End Manager tells me that she got a phone call from someone asking for the Cereal Department. They had a question about whether Pop Tarts were still on sale.

A.) We are not a General Mills factory, we do not have a "Cereal Department" and 2.) just ask if the frickin' Pop Tarts are still on sale!

Then the topper (so far). 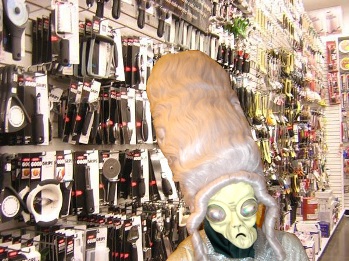 I get called to the office for "a lady who wants to speak to a manager", don't know why.

As I approach, I see that she is happy, smiley, and over 70.

She says "I want you to come over here with me please".

Ok. So we walk three aisles over, and she said that she bought an ice cream scoop a few days ago and she wanted to buy another one, but we had been out ever since, don't we have any more?

That definitely falls in the category of "I'm glad I didn't interrupt taking a shit to do this".

I knew there was a display shipper of kitchen gadgets in the back, so I look, and sure enough there are 48 ice cream scoops.

I grab some and take them to her (for once she kept her promise and stayed where she was) and since the tag says Buy One Get One Free, she gets two.

And then asks, "She'll know they're Buy One Get One Free at the checkout right?"

Imagine that instead of a brain, you have a bunch of little garden gnomes working in your head, tending machinery, stoking fires, sweeping up, and all of a sudden they stop what they are doing, look up in unison, and say, "What?" I think that's what actually happened in my head. A.) No, "she" probably won't, and 2.) How long has it been since they let you out in public?

Somehow I got the garden gnomes back to work quickly enough to say "She doesn't have to, the computer will tell her," which garnered an "Oh, it will? Ok."

And as she walks away the man coming down the aisle behind her says to me "Amazing, isn't it?"

Yes, amazing it is.

The office clerk later told me that when the woman asked for a manager, she asked if there was anything she could help her with, and she replied "I don't think you can help me."

Nope, she's not a licensed professional, I don't think she can help you either.

Garden gnomes! I love it!

The Garden Gnomes analogy made my day, thank you. :)

Lol, I love that little analogy. I swear I've had those moments a few times at work. Especially when they ask me what the price of an item is but they don't want me to ring it up to find out... really? I'm supposed to know the price of every item in a store that's big enough to be a Super Hellmart?