SUBNORMALITY!: It Should Be Illegal To Be a Jerk
Freaky Friday in Grocery Hell 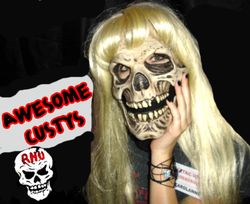 Set scene, Yesterday. Late afternoon. I am doing the Retail Bullshit job. It is rush time, so we are swamped.

A group of three kids come in, none is older than 12. They bring up 3 two liters of a certain cola that is on sale. They hand me a Weffie card that is torn to hell, to the point where the number on the front is unreadable, with a piece of paper taped to it that has the number written on it.

I tell the kids, politely, that I will, this one time, accept this card with which they are (spending MY FUCKING MONEY on junk) buying this stuff, but that they will need to tell their mother that she needs to get a new card ASAP.

The next customer in line comes up, he comments on how that is illegal (non-card holder using the card, hand written number...) and I comment that it is illegal as hell.

A good ten minutes later a woman gets to the front of the line. The next thing I know this bitch is screaming at me about how I just cussed out her kids for using a torn up card, and that they told her when they got to her car that I had told THEM that it was illegal as hell.

Once again I thank the Retail Gods that I have a Zen place that I go to when I am having anger issues with a Custy, because I never once raise my voice despite the tirade that I am being accosted with.

Welfare Whore states, after a good five minutes of screaming at a level that I would have sworn should have torn her vocal cords out of her throat, that she is going to come in the next morning and talk to the manager.

I tell her that she is more than welcome to do so. Finally it's over, and she leaves, after writing my Retail Store Name down.

(I should point out here...she had to write my Retail Identity down. When I work retail I use my middle initial only on my name-tag. You get that...one initial, and she had to write it down to remember it.)

I get into work. Buck (name changed to protect the innocent but totally cool Manager) says "So, I heard you had an incident yesterday..."

Now, I've only been working here for a short time (more than five days, less than two months) so I'm not sure how Buck is going to react to this.

I give him a thirty second run-down on what happened, admitting flat out that I did indeed use the Hell-word to the next customer in line, but not to the kids in question.

And here is where I got completely floored.

The Welfare Whore had indeed come into complain.

However, she got broadsided by an AWESOME FUCKING CUSTY.

It turns out that one of our Lottery Custys was present not only when I told the kids that their mom needed to get a new card, but was also around for when the Bitch arrived and went on her rant.

She took the time to come in and talk to Buck about the whole situation, and back me up ONE HUNDRED PERCENT on the whole thing.

She explained to him that I had not cussed at the kids, but that I had agreed with the next customer in line and used the word Hell.

She then went on to tell Buck that the Whore was totally out of line, and that, in her opinion, I had handled the incident with extreme professionalism, and had not seemed to get even the slightest bit irritated even when the Whore was screaming at me.

Buck tells me not to let these kind of customers get under my skin.

I clock in, and go to work. Lottery Custy comes in a couple of hours later, and asks me if I got in trouble, and admits that she was the one who came in to back me up.

If she wasn't married, and I wasn't on the clock, I would have kissed her. Instead, tonight on my way home I bought a Lottery ticket from a different store (couldn't buy one where I work...Lottery laws you know) and the next time she comes in I will give it to her.

Maybe being back in retail isn't as bad as I was afraid is was going to be...

Kudos to you. I would have lost my cool totally. It's ironic that she could drag her lazy ass in to scream at you, but she couldn't have dragged it over to buy the stuff herself in the first place.