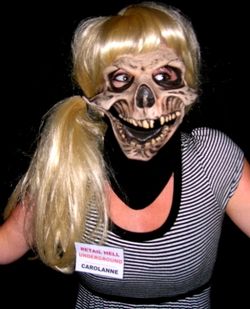 Marketing Monkey again, with a custy encounter from my first job in the field.

I get informed that as part of the Marketing department I get to sit in on the honorary lunch we're having.  Essentially, my company had clients, who had clients...and had offered a scholarship to the clients' clients as a sort of incentive.

Basically we gave our clients money to do a scholarship, they felt happy with us, their clients were happy, everyone wins. Then every year we had the winner and her family come in for a lunch, took a picture, blah blah marketing blah.

So, lucky scholarship girl comes in. We chat with her, and realize that she's one dim, dim bulb. Who won the college scholarship.

Don't get me wrong, it was only a small one, maybe $1,000, but still...this kid was dumb. As in, when filling in the application she listed an email and phone number as contact info, but the phone was disconnected and she never checked her email.

Only by luck of someone knowing her mother did we manage to tell her she won! Her response was "oh yeah, we only use cell phones now. Did you need that number too?"

Did I mention our clients were all phone companies? Yeah, apply for a scholarship through a phone company, and immediately have your phone service disconnected, that's smart. Still don't know why they picked her.

But whatever, my job is to smile and make nice and chit chat with her. It comes out that I just finished college, so dim bulb's dad asked me for advice for her.

I gave her what tidbits I had, though the dad was a jerk. He kept bragging about his daughter, based on the fact that she...won this award.

Seriously, that was it. He was bragging to the people who gave her the money about how great she was...for getting the money. 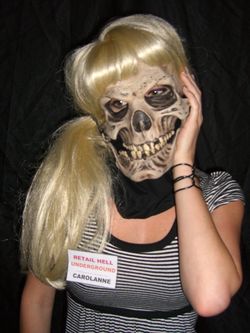 Yeah...and he made it personal. Kept asking us if we ever won anything like that. Kept saying how smart she was, she'd never get stuck in a small town company (looks at me.)  His daughter was going places, wasn't going to be as secretary (looks at me.)

But I can't say anything without getting reamed.

So we go to escort them out and I made the mistake of holding the door for him and dim bulb to walk out.

It's just a reflex of mine to hold doors for people.

But daddy had to turn to me and say:

How the hell does someone opening a door for you translate into a superiority complex?

I live in awe of the fact that this guy thinks that if someone is polite to you, they must be a loser.

1. "No sir, I learned the importance of being polite while in college."

3. "No sir, I learned the difference between 'Push' and 'Pull' long before I went to college. What's your excuse?"

4. "No sir, I didn't want you or your daughter to embarrass yourselves by having to open the door with your tails."

5. "Well sir, first your daughter needs to overcome the genetic handicap of having a dumbass like you for a parent."

6. "Yes sir, I'm sure that one day she'll be much better at holding doors open for people. Perhaps as a restroom attendant."

and the last comment is where i would have lost it. i work at a walmart and people are all the time making comments about how stupid i am because i work at walmart. im a law student, i am most likely more educated then half of my customers and i want to tell that everyone single toothless mullet man who thinks he smarter than me.

Muhahaha! He actually thinks she will do better having any old degree from any old college/university? Talk about delusional.
Has he looked at the job listings lately? To even get a job as a "secretary" now days you have to have at least a BA, know bookkeeping, be an expert at Microsoft Office and have a good grasp at IT.
Gone are the days when you could have a degree in underwater basketweaving and land a great job.

At least you can take satisfaction in knowing that she's never going to actually get her degree, and the disppointment that'll cause. The higher they fly, the deeper they fall. :)

Wow, Daddy there seems to have some issues, no? Too bad he doesn't realize that a degree won't mean shit if the degree holder won't do anything with it. Jokes on people like Daddy here that I never finished school (well, I was there all 4 years solid but behind in credits) and still went on to land jobs based on my work ethic that would make this dude's head spin and his comebacks come out sputtered (not showing off or anything, just illustrating that reality can be quite all over the place!).

Must be a REALLY small town where Daddy here is from if that's the kind of bragging that will fill his head with ideas!

Most of the people I work with are in college, saving for college or have high degrees but can't land jobs for those degrees because of the economy. Ahhh reality sucks, doesn't it?

It's great to have dreams, but when you mistake them for reality, you're setting yourself up for a mighty big fall.
Daddy Dearest doesn't know that many state universities are routinely turning away students with 4.0 GPA's and perfect SAT scores.

I bet Miss Entitled majors in something like History and then wonders why she can't get a job.

No Postal Slave... that would be Political Science. My best friend has a degree in that and she is now working in health care and does all the bookkeeping for their plumbing business. She wants to go back to school, but her hubby doesn't believe the money would be worth it.

"At least I get PAID a great salary to hold this door, sir. Don't let it hit you in the ass on the way out."

Asshole. He probably didn't go to college his damn self.

Postal Slave, you have to be smart to pursue a History degree. My sister studied History with minors in Greek and Latin Language, then got her master's in library science and has a great job working in museum archives.

How many people who have gone to college even remember half of what they learned anyway? I want to know exactly what I'm going to do with my life, or part of it before I decide on going to college.

There's a fine community college nearby, but I'd be more comfortable learning online.

Hey I'd be thrilled to get a $1,000 scholarship! I'm going for my BA in animation and even $1000 would mean that much less in student loans I have to pay off when I graduate.

As for Dim as a dying Christmas tree light, and her daddy? Eh.. well.. it'll bite him in the end.

Console yourself by remembering that this is the only thing these people have to be proud of. He's belittling you because he knows he and his daughter are useless shits and they'll go nowhere. That doesn't excuse his behavior, but it might make you feel a little better. They deserve your scorn *and* your pity.

"Actually, sir, I got my manners before College. Unfortunately you didn't." But meh, I don't like jerks.

To quote Captain Kirk, "Courtesy is for EVERYONE". It costs nothing to be courteous. Unfortunately, illiterate dickheads like Daddy Dearest never learned that.

As for Miss Entitlement? I suspect the only degree she will ever work at is her MRS. degree because she is too stupid to get a REAL degree.

Lastly, a $1000 scholarship? Well, Daddy, a thousand smackers will buy her books...for a term.

I loved number 2 too, mcarp! I am SHOCKED someone who had a door held open for him responds with that sort of remark. Call me old-fashioned, but if you are female, Marketing Monkey, HE should have held the door open for YOU! When I started working at my school 13 years ago, the boys ALWAYS held doors open for female staff, and this is a pretty rough school. They dont do it so much now...
I always loved what Bill Bryson said about doors: "the next person who walks through a door I have held for them and doesn't say thankyou is going to get it in the kidneys". Brilliant.

Unless I'm mistaken, she only has the schoolarship for now, not an actual acceptance from any high-up college, it'll do her good when she'll end up in a small comunity college that her father will never mention because he's too ashamed to...

You said you didn't know why she got picked and that the only reason they were able to contact her was because someone knew her family - could that be why they picked her? Doesn't sound like she has anything else to offer.
I would have lost it if I had been you. I applaude your self-control. Maybe we should just feel sorry for him, he obviously has confidence issues and since you're probably better educated than he is plus younger he has to put you down somehow.

The sad part is I learned this girl is going to school to be a teacher! I doubt she'll be teaching any good manners.

What I didn't point out to dim bulb daddy is that actually, half of my education was paid for by scholarships. Not bragging, that's just what helped me not slug him. Still burned my toast, though.

Side note: yep, I'm female, but I like to hold doors for people. I feel it's polite, plus my horrible vision makes me more comfortable following someone out a door than having it held for me.

Yes, you are old-fashioned, kiwibeetroot. Whoever reaches the door first opens it for the other. Politeness and common courtesy do not have gender restrictions.

I will have to say, I appreciate it when people hold doors for me. Surrido got slammed by a door because some asshole went through, acted like he was going to hold it, then LET GO! By the time I had Surrido calmed down (she hadn't gotten her mobility harness yet then), I couldn't find the jerk to give him a piece of my mind. She is still nervous going through doors, and I haven't been able to teach her to hold even a screen door for me, yet. If I have the opportunity to hold a door for someone, I will. Its only common courtesy.

Sorry guys, didn't mean any disrespect with the history degree thing. I just currently have a friend whom took that and can't find work anywhere in her field in our city and is always complaining about her choice.