Hey, this is Grocery Slave. I'm new to the site and I absolutely love it. I've been working at a grocery store for what feels like ages as a cashier (it will be 2 years in August *stab*) and I have had just about every kind of customer imaginable.

My most recent custy issue however was by far one of my worst. I'm pretty sure she even attempted to get me fired... thankfully my managers, team leaders, and coordinators love me.

Ok, so it was a really busy Friday night when an older man rides up in his electric cart. He swipes his shoppers club card as I'm asking him how he is, and he rolls off immediately saying that she's with him.

I thought it was a little odd, but ok, hasn't been the first time.

So I look up and there's this rather larger sized woman with short wavy brown hair nearly slamming things onto the belt.

I smiled and asked her how she's doing and if she found everything she's looking for.

I got no response. So I start bagging and put a bag of baby wipes behind me. That's when the issues started.

Custy: Bag lightly for me. *holds up a bag of sugar* Even this is a little too heavy.

Me: Alright, I'll do my best. If there's anything too heavy just tell me and I'll make it lighter for you. *smiles*

So I'm half way through bagging and she's only NOW starting to put things into the cart and she tried to lift the bag that I first bagged.

Custy: (In a whiny voice that you'd hear from a child who was denied candy for dinner) This is too heavy. I just had back surgery and an injury in my neck. It needs to be lighter!

So I turned around and took some items out and re-bagged those items and asked if it was ok for her now. 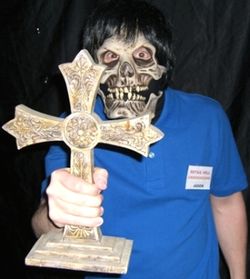 I am now done most of the cold stuff apart from the things from the Olive Bar which I am now ringing up and placing rubber bands over the lids because they are NOTORIOUS for popping off when she asks me to hand back some cold things.

I look behind me and she's holding a bag with éclairs in them. Now, the container that the éclairs are in is a rather thin plastic container.

So I turn back around and finish bagging the Olive bar items making sure they wont topple over and spill.

This is when Ms. Bitch decided to get pissy with me.

Custy: You know, you shouldn't work here if you're going to be rude!

Excuse me?!?!?! I just saved you from having crushed éclairs and I'm the ONLY cashier that I know of that not only puts a paper clip on the baguettes so that they don't fall out of the bag, as well as rubber bands any container that often opens up and spills shut that I know of and bagged for you.

And I am being rude? Sure, I could of told her why I didn't follow her request right then and there, and I was about to... when I realized that she wouldn't have listened anyways.

I then finished bagging silently with a neutral face, told her the total and asked her if she was paying with debit, credit or cash. I got no response so I looked over. She placed some dollar bills on the side of the register.

When I went to reach for it to count it she PUSHED it towards me. Of course, I couldn't grab all of it in time and some of it fell between the cracks of the register. Meaning I had to lift the register and stand on the bag stand so that I could reach down and grab her precious money from one of the filthiest places in the store... I then counted the money and put it into the register. She was short about $156 so I re-looked to be sure I didn't miss any.

All the while she's tapping her fingers and letting out annoyed sighs.

I just wanted to punch her. After I was sure I didn't miss any I again asked Debit or Credit. Again, she said nothing. Just pushed buttons... and I hit the EFT button.

Handed her the receipt and told her to have a nice night with as much of a smile as I could muster with out having a "I fucking hate you" undertone in my voice. 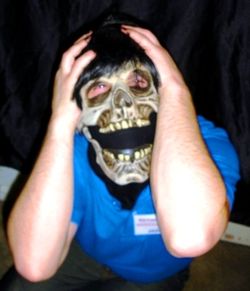 Sure enough about 15 minutes later my manager called me to his office. He asked me for my side of the story and while I was telling him what happened I burst into tears. I'd had a long day.

I just got back to work after having a pinched nerve in my shoulder that ran all the way down to my palm that forced me to call off work 3 times that week (and I'm a bit of a workaholic), not only that, but my mom had been harassing me all week, I found out that my dad wasn't going to my graduation because apparently me telling him 2 months ago wasn't soon enough for him to get the day off to go to his daughter's High School Graduation..., and it all together was just a horrible week.

Thankfully, he adores me and said, "Hey, look, don't take it personal. She was probably having a bad day. You're one of our best cashiers, and I hate seeing you upset. Would you like to leave early?"

I told him no, and he told me I can take as long of a break as I'd like to get myself calmed down and I can hop back on register.

A week later I saw the woman again walking with another woman and she told the other woman, "we're not going to that one. She's extremely rude! I can't believe she still works here!"

Thankfully, out of the 2 years I've worked there, I've only had 4 people complain about me (all for things I would never say or do... heck, one even claimed I "licked her muffin" once (which is a whole different story)). Most others compliment me, I've even had some give me hugs or high five me or repeatedly come back and wouldn't shop if I wasn't there.

You're lucky that you've got managers that will back you up. Most managers ( I'd say a good 70%) tend to be spineless worms that bow to the Fuckstys every whim. ( I think that's how they get promoted. Whining and cringing to make the bad Fuckstys happy.)

And especially having one that will let you take the time to get away and compose yourself after a really bad encounter like that, rather than force you to stay on the register and suck it up, is beyond sweet.

I really want to hear the "Licked her Muffin" story. That can be taken so badly...

You've already learned that retail can be a rough job. But having had only 4 complaints in 2 years is a good sign, along with the little details like the rubber bands and paper clips.

I have a suggestion that will really help when you are having those Hell Days. Go to your local Goodwill and find a cheap couch. Buy it, but only take the seat cushions. Hit the hardware store for a roll of Duct Tape. Use the Duct Tape to tape the seat cushions to a wall. ( This works really well if you have a basement, so you can tape them to the concrete wall, instead of a painted one.) You now have a very cheep punching bag. When Fuckstys piss you off ( and they will, if you stay in retail) go home and spend a few minutes hitting the walls you now have protected. It will let you burn off a lot of anger, without hurting anyone.

Fuck her. What a bitch. You sound like a great slave so don't let the bad ones get you down.

sounds like you work for the big double you. anywhere in particular?

Ugh. UGH. That woman would have found my fist through her eclairs if she acted like that to me. This disease of entitlement in some people is just sad.

On the note of your pinched nerve though - I've gotten something very similar (sensation running down my arm to my hand and two middle fingers) from just desk work all day, and I'll tell you that a good massage therapist will knock that right out if it's just from over tight and knotted muscles. In fact, I highly recommend massage therapy to anyone really. It sounds like a shallow indulgence but a good therapist will really help your well-being, and you'll get to know your body better to stay healthier...and not have to miss work =).

I also vote for to hear the "Licked Muffin" story!!

You wouldn't happen to work at a Wegmans would you? The phrases "shopper's club card" and "olive bar" are hauntingly familiar.

I kinda wanna hear the "licked her muffin" story now.

I second the "licked her muffin" story!

It's so great having managers that back you up! That woman was being a bitch because she gets off on it. You handled it well. I hope she accidentally sat on her eclairs when she got into her car.

Did anyone else read that as licking her "muffin", nudge nudge wink wink? I spent way too long figuring out how that would even be possible in the middle of the store before realizing we might be talking about the baked good.

I'm soooo gonna have to hear the 'licked my muffin' story.

@N/A: Yes, I absolutely did. And I feel sooo wrong because of it. X)
You are so lucky you have a manager with a spine. That is so rare. We had ONE manager at my job who would back his employees and not give in to asshole custys.......and they fired him. So much bullshit....

You seriously have to wonder if these people walk around with killer bees in their crack to make them so pissed off at the world. No wonder they guy scanned his card and rolled on. He didn't want to be near her either! Having a great manager makes all the difference in the world.

I'm voting for the muffin licking too! And welcome to RHU! :-)

Muf-fin! Muf-fin1 (in my best cheerleader voice). We All want to hear it!

People like this have OBVIOUSLY never worked retail and can't understand what we all do each and every day. Believe me, if these folks had to work even ONE SHIFT (preferably on the first Saturday of the month!) they would sing an entirely different tune!

It amazes me that customers are allowed to harass employees like that and then have the spineless managers lick their boots on top of it! Over the past 7 or 8 years we have been reduced to a minimum wage economy full of people who get no benefits, no job security and are threatened with losing their jobs at every whim. Workers need to start standing up for themselves again.

When a custy that's such a hassle refuses to be helped by you, that's a badge of honor. I found the best way to safely garner this affect is to just laugh at them openly. You can't be fired for finding your job amusing.