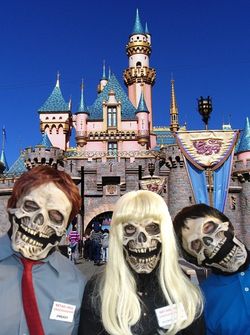 Hey all! Mouse Mastered here again with a story and an update.

The story is semi-brief, and seems to be following the trend of daemon parents stories being posted recently.

I normally see kids being punished at the job all the time. Usually just words, every rarely a quick spank on the butt, but nothing really bad.

Unfortunately, a female coworker of mine had a story to tell me.

This was on the Saturday of Memorial Day weekend, and as such the park and the restaurant were fairly busy. Our local weather decided this would be a wonderful time to have a downpour happen, leading everyone to rush indoors and crowd the restaurant even further.

The main problem is that when it was sunny we have a system set up to control the traffic in/out of the restaurant as well as into and out of the main seating area.

However, since we're technically a weather shelter, we are not allowed to implement the policy when it's raining. It gets quite hectic.

My coworker, hereafter known as FCW (she's pretty awesome), was at one of the condiment stands near one of the entrances.

A child was upset or some such, the usual, poor kid was probably freaked out by the crazy conditions brought on by the weather.

The mother gets fed up and doesn't just yell, but GRABS HER CHILD BY THE THROAT AND PUSHES HIM INTO THE GROUND.

I wish I could make this up. She puts her child on the ground in a fucking choke hold and THEN starts screaming at him.

Several guests nearby all stopped and stared at this woman and unfortunately FCW could do NOTHING about the situation.

The mother finally let go after finishing and "controlling her child."

FCW was disgusted about it, but, again, she couldn't get physically involved and was unable to get to a phone/supervisor so that security could be alerted.

Some people should seriously NOT have children. =|

Now that the depressing part is out of the way, I have something good to report. A few of you may remember the story I posted a while back about a friend of mine being terminated for an altercation that happened outside of the park and off the clock.

Well, she appealed through the union and has been approved for rehire, and can reapply/come back to work next month. =3

Congrats to your coworker for actually getting her job back! And I say that mother should be put into a chokehold on the ground to see how much she likes it.

I like how all those people stand around and then look at HER. I'm sure they weren't all quadriplegic. Bazookas should be allowed in that instance.

Congratulations to your co-worker for getting her job back! I hope she also gets back/missed pay. Unions can be good things.

Jeeze... those people could have at least SAID something. I'm sure they had phones on them. This is what pisses me off about people... they're too concerned about their own personal safety to help some poor kid who's getting strangled by his mom...

Sorry, in this case I would have cared more about opening a can of whoop ass on mom than my job. I gladly go to jail if it means I could beat the shit out of someone who does this to a child.

What the hell??!!! How can you do that to your own child?? And why did no one offer to help? If you see that shit happening you step in! But yay for your coworker :)

What I never understand is how people stand by and just watch. Seriously. In that case, someone needs to intervene - even to risk a job.

It saddens me that people would just watch that shit go down D:

However! I'm glad your friend got her job back and am looking forward to more of your posts as they are some of my fav's :D

Nah, if you look it up, it's much more complicated than that. Especially once you get involved in Socrates and whatnot. There are other spellings too, like daimon and whatnot, but they are not all (or even mostly) evil, wretched things like demons.

Plus, just in a more modern sense, daemon is much more commonly used for computer programs or, as in the link I posted, a form of self-discovery and personification.

Either way, I don't really care much, I just thought it was funny because of the imagery it gave me because of how I tend to think of daemons. XD

We had a lady haul off and slap her child across the face as hard as she could. The kid ran in after mom after being told to stay in the car. I could see her getting mad, maybe a couple swats on the butt, but the kid ran into the glass door so hard, it sounded like a gunshot and set off an OCD attack on me. The kid was hurt, and screaming, and crying, and the mother hauls off and slaps her across the face and screams at her, then comes up to my register like nothing was wrong. I told her 'Lady, I REALLY hope you don't expect me to wait on you after that.'

I call the fact that no one helped the child the mob effect. Everyone there was probably thinking "Someone will help him" or aka "I don't have to because someone ELSE will". I'd like to think that I'd be different and would go up and say something, but I'm not sure I would have the courage to do anything. I certainly would take pictures and try to get them to the right people.

To: Admissions Whore:
"Mob Effect" is a very appropriate term; I saw it all the time in my years of food service and retail hell. When I was off the clock, I was one of the lucky few who didn't suffer from it. I blame my martial arts class and my upbringing. I call local police whenever I see an animal in a car; I have police on speed dial when I see child abuse (not a case of a spanking, but real abuse like the choking in this story).

I'm a parent; I have no need to hit my child because of how I am raising him. My parents did NEED to spank me when I was growing up (I learned the hard way). But that lady should have had her child taken away permanently, been forced to have her tubes tied (or a hysterectomy) and then been banned from all public businesses.