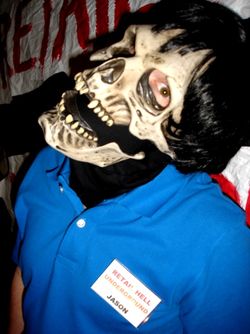 Hello all!  Time for a story about idiots and fun co-workers!

So, in my state, we are having a no-smoking in public places/businesses law enacted on July 1st. However, my bingo organization has decided to jump the gun by a month, starting our smoking ban on June 1st.

Needless to say, the smokers (which are the majority of our custys) were unhappy with this.

"You should just tell me to go home!" - Said by one the week before our ban started.

About the only thing we could say was "OK!".

"If I had known this was non-smoking, I'd a stayed home!" - Said by a few players on June 1st.

The second quote really got me. See, we put signs up everywhere for this. So many signs that I actually got told by a building maintenance guy that we put up too many signs.

We made announcements when we had bingo sessions for the past two weeks.

We even had other bingos in the same hall make announcements for us. It's not like we kept this secret. Also, they said this stuff BEFORE they bought their bingo sheets. They could have just gone home.

To top it off, the general crankiness of the players was up by about 3 notches.

One player (who we'll call Player A) complained to me that I needed to "Tell her *points* that she needs to stop telling her *nods her head* to shut the fuck up blah blah yak."

I get my security guard over there and tell him that Player A is having a problem with some other player and he needs to figure it out. This is after he's done tossing a drunk out. Fun night.

At least I didn't smell like an ashtray at the end of the night.

P.S. I want to have a poll. If I can get another story up here, do you want to hear about a nasty-ass cheater we caught a few years back or about a couple of our regulars that are... interesting characters?

both sound fun, but if you have to go for one a post, tell about the regulars! regulars are always fun since after a while you get to know their quirks and can laugh at them.

I would like to hear more stories from you :).

I want to read both! There can never be too many stories about custys & crustys!

Depends on the circumstances under which you caught the cheater; if they're more interesting than the regulars ...

Agreed both, however cheaters sound fun. How the hell do you cheat at bingo? lol

I was thrilled when Indiana went no smoking. I was having trouble with asthma at the time and every restaurant I went into was a nightmare for me. Smoking is the reason I never got into going to bars. If you can walk in and the haze is down to your knees, the non-smokers like me had to be miserable.

I'd also like to hear both! I agree with Pharmacy_psycho about the smoking. Going to the bars used to be miserable. My city went smoke free almost 2 years ago now, and I'm so glad they did.

Bingo - My vote is the share both stories. :-) I want to read them both (and more if you have them!).

I wasn't happy when we went non-smoking in Ohio. *Shrug* I'm a 'smoke when I drink' person. I wholeheartedly agree that restaurants should be non-smoking, but I don't agree that bars should.

A bar is an adult environment and you go in expecting adult behavior. Smoking, drinking and cussing.

I also think that there was a great market for non-smoking bars. I *do* get that non smokers want to go out, too. I think a lot of retailers could have made a good profit with a non-smoke bar. They would have seen some of my money, I know that.

Should my smoke infringe on your night out? No, I always made sure whoever was next to me was also smoking, anyone sitting right next to me that didn't light up, didn't have a pack out, I didn't bother, I moved. Maybe that didn't make a huge difference when 70% of the bar was smoking, but..

But..it's my night out, too. Winters get nasty and patios see the clientele get a little..rougher than they get inside. I don't like having to leave the sight of the bouncer and the staff.

Don't worry, I'll write both stories. I just wanted to see which one I would put up first. I probably should have mentioned that. :\ If I did both at once it'd be ginormous!

I had a discussion with one of the players that was bitching. She agreed that it was her right to smoke. However, I pointed out that it is our right as a business to have the environment that we wish to have. She asked why we couldn't wait a month, and I just said that the management must have their reasons. I later found out that it was for the workers, since in summer we use the 18-and-over members of our "youth group" (it goes to 21) to help work when we can.

We have one regular worker that smokes, and a couple backups that smoke, but there's a back room they can use, or they can go outside. They aren't too happy either, but at least they don't bitch.

Steph, I'd like to say that our Bingo is an adult environment as well (it's gambling!) but too many players bring their kids, even infants. I dunno what the smokers will do in winter, though.

And Postal Slave: There are actually more ways to cheat than you might think. I'll have to explain some when I do that post.

Both! But if I only choose one, it's gunna be the cheater!

Bingo, the smokers will do what smokers do - they'll go outside. :-)

It's a touchy subject, I know that. And it's tough to get a decent vent system in place to offer both. :-)

I am allergic to cigarette smoke and I was THRILLED when all public buildings in my state went smoke free. One of my best friends is in a band and I have never been able to go listen to him play for more than about half an hour before i had to leave. We went to see him last month and came home smelling like good coffee rather than an ash tray! How refreshing.

Steph, choosing NOT to smoke is also an adult behavior and I choose not to inhale second hand smoke, also another adult choice. also, in our society, more people do NOT smoke than those who do. Should we cater to a minority?

I went to Japan in January and was surprised to see how many anti-smoking laws and rules have been enacted in the last few years..and a very high proportion of Japanese (men in particular) smoke. You cant even smoke walking down the street in most areas of Tokyo now. What WAS interesting is how the coffee bars are RAKING in the dough even in the recession - they ALL had smoking rooms - automatic doors for access (sure, a bit of smoke leaked out when the doors opened) and all seperately vented. So the local workers, instead of smoking outside their buildings, go to a coffee place so they can have a smoke, and spend 3- or 400 yen on a coffee at the same time. Mega-moolah!
And it's a lot more pleasant for the staff and non-smoking custies than before when anyone could light up anywhere.

(and I vote for both stories, too!)

Lori - we're supposed to protect the minority's rights even when the majority disagrees. :-D

That said - a bar isn't the government and shouldn't give a lick about 'majority or minority'. A BUSINESS should cater to the people it can get money from. That's EVERYONE. I want to smoke in a bar or club. I drink more when I don't have to walk outside to light a cigarette - where I'm frequently not allowed to take my drink. The more I drink, the more money the bar makes. You can see this in the bars here. Fri and Sat might still get kind of busy, but the bar I go to used to be packed during the weeknights, too. It dropped like a rock when the non-smoking went into effect. The bars ignoring the ban? Packed like sardines 5 out of 7 nights a week.

There would have been a HUGE and lucrative market for non-smoking bars. They'd have seen some of my money, I have non-smoking friends, and I would have gone simply to support the idea. We should be able to choose whether we want to smoke or not and having the choice of a bar that allows it or not.

We had the smoking bad enacted here some years ago. One bar owner threw tantrums, griped and whined, and shortly after the ban went into effect, closed his bar (which someone else bought and is making money on). Another local bar owner began having smoke-free nights in advance of the law, made an effort to be creative with specials, entertainment, etc., and got his customers used to the idea. His business not only continued to make money, he made MORE after the ban went into effect. Smoking is an activity, not an intrinsic part of one's personality.

BTW, they are testing an anti-nicotine vaccine here. It will be interesting to see if it can help people who want to quit, but have been unable to.

Mimi - kudos to those owners who succeeded. Our bars aren't floundering (we like to drink 'round here), but I've definitely seen a drop-off.

Yes, it's an activity and it's a choice. I just think we ought to have more choice in it. We can choose a bar based on drink specials, food style, music type, location, and more.

I'd be interested to see how the vaccine works, too. :-)

The big issue with I have with smoking is while you can be nice and try to keep it away from anyone else, it really doesn't work that way. You can choose to smoke, you're also choosing to make anyone around you, including the bar staff smoke. I don't know about any of you, but I know plenty of bar staff sick of coming home smelling like ash trays.

I definitely agree smokers have the right to light up, that's their choice. But I disagree with it inside public buildings as they're then taking their choice and are forcing it on all in the vicinity.

I had a mother who smoked for years, and hated it and being around her (even afterwards). So can't agree with the mindset that smoking in building - or bars - should be allowed. You choose to smoke, but you have no right to make others smoke too (which is what happens).

I absolutely support the smoking ban here in my country (inside public buildings or workplaces). Smokers are still free to light up, but they can't make me inhale it any more.

Smoking in enclosed public spaces or anyone's workplace was banned over here a few years ago and it's made a huge difference to the quality of my life - I'm asthmatic, and while usually it doesn't bother me much, the slightest whiff of cigarette smoke just closes my throat right up and stops me breathing almost totally. I never used to be able to go out with my friends - but now I can, and it's glorious!

Steph, the problem was never with what you might call "considerate smokers" like yourself - you're in a much-maligned but appreciated minority. Most of the smokers I've encountered have been totally deviod of any acceptance of the fact that maybe not everybody wants in on the habit. They're the problem.