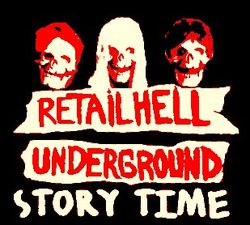 Well hey there everyone!

It's Cherry IScream, posting once again.

This is not actually a post on my current job, but the one before. Before I worked at B + J's, I worked at a high end deli. It wasn't a huge business (it had two shops, both on the outskirts of London). It was all very classy, premium (or so I was told) products, with huge mark ups.

Seriously, some of the stuff was priced ridiculously high. There was a little cafe area in one corner, and a bacon sandwich (literally, all it contained was a few strips of bacon between two pieces of bread)  was about £6.00. And that was the cheapest thing on the menu!

But it wasn't the products I took issue with.

Most customers were similar - entitled but nice enough as long as they could get what they wanted.

One day, a female crusty walks in. She actually looks quite sweet, like a typical "someone's grandma" who keeps sweeties in her handbag. She waits patiently in line and doesn't say much as I ring up her things.

Then, once she's paid, she leans in and says:

FCr: Excuse me dear, one of your signs outside is misspelled. (We have chalkboards outside advertising special offers - it saves on paper)

FCr: (Leans in and whispers) I don't know... those people... they can't even SPEAK English properly, let alone SPELL it.

For context, about 20% of the workforce were Sri Lankan. That was the "Those people" she was referring to.

I was speechless. There had NEVER, in the year and a half I had been working there, EVER been an issue with ethnicty before that day. All of the workforce (save for the managers) were sweet and kind. They looked out for each other. I was by far one of the youngest in the workforce, and it was my first job, but instead of taking advantage of my inexperience, they showed me the ropes with nothing but patience.

I wish I could turn this into a Retail Balls story, but unfortunately, by the time I realised the perfect response, the old witch was long gone.

In my mind I can see it now:

Me - Actually, quite frankly, they speak English a hell of a lot better than you, you miserable racist bitch.

FCr - (Offended) How dare you? I want to speak to your manager!

Me - Right away. Would you like to speak to Lavan (who was Sri Lankan), Landrim (who was Polish), Allan (French) or Andre (Spanish)?

That would have shut her up.

Has anyone else ever thought of a response to late to say it?

Most of the Brits I know in that age bracket are racist to one extent or another. I just figure they'll be dead soon enough. 95% of the time I just ignore it and picture them in a casket. The only time it really bothered me was when my granda sat staring daggers at my Kenyan-born friend during my wedding reception and believe me, I would have kicked him out had he said anything.

Sadly there are plenty of racists in the next generation too and they often seem to be the "I'm not racist but..." type. My mother for example insists she has no problem with non-caucasians yet she says they're not British. Never mind if your great-great-grandparents came from India and you've never even set foot outside of Europe. If you're not lily white then you're not British. She also finds it very amusing when a Chinese man has a Glaswegian accent or a Pakistani man has a cockney accent or whatever. Hmm, sure mom, you're not racist at all. Drives me nuts.

On behalf of a very good friend whose parents came here from Sri Lanka, my head probably would have exploded before I could have ripped the old hag a new one.

Ok, this happened to me just last Sunday at the Greek restaurant where I moonlight as a waitress a few days a week.
I'm in California, where there's a large Mexican population.
So this couple (both in their sixties, a retired guy with shiny white teeth and his trophy wife who refuses to age gracefully) walks in for lunch. Wants to sit at a table outside, which is dirty. I'm cleaning it, they are standing there waiting.Then the guy asks the question that made me so mad for the rest of the day:
"Are the chefs Greek or Mexican?" --saying it with a smirk like he "knows" that most back of the house in Cali are Hispanic.
I stop cleaning the table, look straight at him and say without a pause:
"Mexican."
And glare. I was thinking: "What, are you gonna leave now? Please do us all a favor and GTFO!"
He then asked if the foor was STILL pretty good.
Boy, did he make me mad!

"Are the chefs Greek or Mexican?"

I would have said "American". But I'm just that way.

I've been fortunate that I've never had to deal with a "those people" type, but I've been saving a few responses:

I don't know about Grandma, but "my people" came over here in the boat during the Potato Famine. With few exceptions, we're ALL immigrants.

I work in a public library that has a Spanish collection. It is small but is Wused extensively. we get people who gripe that "those people" are using the library and "Why don't they learn to speak English?". Hey, these folks pay taxes too (our library is funded solely by city property taxes) and the items that are checked out of the Spanich collection the most? The "learn to speak English" CDs, tapes and books!

When these ignoramuses ask about this, I always want to tell them that these folks are learning a second language and do THEY speak a second language? I DO, so they can't get snarky with me.

My favorite comic on this subject:
http://xkcd.com/84/

Jeeze, I've had one customer complain and make a racist comment about two of our customers. I told her "they're a lot smarter than you think. Go apologize for your rudeness. Your comment was completely uncalled for." She complained about me claiming that I said "they're a lot smarter than you'll ever be" to my friend behind the customer service desk who was giving me a ride home that night in the snow. She then wanted to complain to my manager. Some how that request seemed less appealing after the night manager, Khaleef, came walking over. lol

And isn't it amazing how fast people can twist things to their favor when they are wrong? Now GTFO!

A friend recently graduated from nursing school. Many of her class mates are Caribbean and were very fancifully dressed in some pretty skimpy outfits at graduation. I had to listen to her white, Irish family talk about "those people dressed likes sluts at the prom" at graduation. "Those people" who all just earned nursing degrees? Who are your daughter's friends and classmates? Who will work in emergency rooms saving your dumb ass? I hate to admit I kept my mouth shut but I was too tired to fight and was way outnumbered. We have different customs in our respective cultures, deal with it. I have little tolerance for racism. Asshats.

I think Joe's got the right idea. Most Americans' parents, grand or great-grandparents came from somewhere else, and pretty much every ethnic group that came here got treated like shit at first (some more than others, as we all know). When someone makes a racist remark, a good response would be, "and where did your family originally come from?"

A convincing lie if you put on a good game face....

My manager had me write the sign.
Good no matter what.