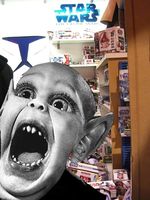 It's that time of year again- open season on brats!

Brats who aren't in school, tagging along with Mom while she ignores them and shops- while they terrorize stores.

After all, it costs the store sales when brats destroy merchandise, chase other shoppers out of the store with their noise, and occupy the time of the slaves who must pick up after their messes!

I was helping in another store this week, doing resets and what not and some woman yesterday left her 2 hell spawn when she went to fill her scripts at our pharmacy window.. I actually felt sort of bad for the kids- they were maybe 6 years old. The one wanted to go after mommy and the other kept calling his name & when he went back his brother was all like "where'd you go? you made me scared!" Seriously wanted to tell the idiot mother this is how children end up getting abducted. *face palm*

How about I now have a concussion from a hell spawn thinking it was a bright idea to chuck a hard rubber bouncy ball across my bookstore and peg me in the head with it? I hate the fact that the mother's response was "Oh you shouldn't have thrown that." Can I punch you in the ear so you can feel this lady? Yes. I'm very bitter.

I think that's a wonderful idea!
It can go into paying for the clean up for whatever horrific mess they make and the stress for dealing with the little monsters.

Just outside of our store is the mall's atrium. Hell spawn discover very quickly that the acoustics are PERFECT for throwing a screaming, five-octave spazz-out.
That's bad enough, but then mommy brings them kicking and flailing into our workplace.

I say offer duck tape at the door. That should cover most problems.

Ha that sounds like a great idea! Yesterday a woman was in our store with a small child who cried and screamed at the TOP of her lungs for nearly an hour! For the sake of youself, the parent, and the headache you're sure to have, and the sake of the customers and retail slaves working, please take your kid outside or discipline them! My parentes would have had me in the bathroom with a sore ass if that went on for more than a minute. I know that the kid was probably throwing a fit because she couldn't get what she wanted but geeeez. Needless to say, my nerves were frazzled by the time they left the store (after spending a whopping $8).

Sometimes it is the parent that deserves the spanking and not the child. When I first delved into retail electronics we had a lost child standing in the middle of our store crying. One of the ladies in my department is consoling the child and trying to get her name. I am making pages over the intercom asking for the parent of this child to please come to customer service.

After 30 minutes of no-show by the little one's genetic donor, we call the police and they bring child services along. It takes them roughly 30 minutes to get to our store.

The child goes off with the "nice lady" to a waiting vehicle (still no name, still crying) while police are processing the report (our statements, times, etc etc etc). A last ditch effort to page/find the genetic donor ends fruitless. Finally, after about 20-30 minutes (so 1.5 hours from the very beginning), the police, child, and "nice lady" all leave. Can you guess what happened 15 minutes later?

A customer, who had been shopping in the video department, was ready to check out and asked, "has anyone seen my little girl?" ?!! Lady, we asked you if you had a little girl with you several times already! You said "NO" (rather rudely too). The cashier didn't have the heart, but I did...

"Ma'am, your child was taken away by the police since you abandoned her."

*Cue graphic/violent explosion!* Threats of lawsuits, name calling (that's where my nick of BitchBoy came from), et cetera. She demands that we get her "darling daughter" back and we give her the number for the police and the number for child services.

If all is fair, that child found a good home.

Good for you BitchBoy, mega thumbs up!

If they charged for bratty behavior at every store in town, my next-door neighbor would be broke in one day. Especially if they made it a "per child" charge.