Creepy Custy Encounter: What Has Been Seen Cannot Be Unseen 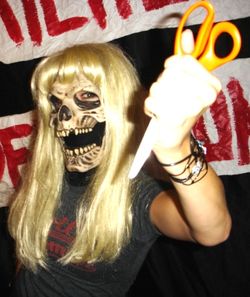 "You there!!!" The slave driver manager yells across the front end.

Incognito stands stock still, hoping her garish orange apron will help her blend in to the garish orange shelves. Maybe the slave driver wasn't talking to her.

Unfortunately, it was her being called. She puts on a smile and asks the salve driver what she can do. "If you aren't with a customer, we need you to greet for an hour."

"Sure." Incognito smiles outwardly but inwardly is feeling quite hateful. Nobody likes to greet. At least an hour of being forced to stand in one spot and be ignored by almost every customer that comes in the door is not exactly anybody's idea of a good time.

The despicably long hour of nothing begins, predictably, with nothing. Few customers are coming in, and the ones that do are ignoring her, though she smiles and speaks to each one. The line at the return desk is long and full of cranky people.

After perhaps thirty minutes, two rednecks push a cart full of pipes and stuff to the front of one of the aisles near the greeting post. They both wander off their separate ways, leaving the cart unattended.

Several minutes later, one comes back and stands by the cart, waiting for his partner. He waits for several more minutes, then turns to Incognito. "Seen the guy that was with me?" he asks.

"Well. I'll show you a picture of him and if you see him come by, tell him I'm outside." The redneck pulls out an ancient flip phone and waves it in front of her face.

Instantly, her eyeballs explode into balls of fiery doom. The picture happens to be of an overweight, graying, old man, chilling in a lawn chair wearing far too small tighty whiteys and nothing else. His enormous hairy belly hangs over the misguided underwear choice.

"Yeah, that's him in his underwear. Anyway if you see him, let him know." Redneck Number One closes his phone and marches out of the store, perfectly nonchalant, leaving Incognito to poke out her mind's eye on her own.

Seriously, guys, I'm not making this up. Fortunately, I have not one but TWO job interviews tomorrow. :D Neither in retail. Wish me luck!!!

How kind of him to show you a photo. Not at all traumatising. The day they invent eyeball bleach will be a good day.

Ah, I am looking forward to the days when my internship is up, and I don't have to work retail for the lenient schedule anymore. Good luck on the job interviews.

Picture of old fat guy is one thing... yeah random people are idiots...

BUT a manager saying "YOU THERE" is awful, that's just a big WTF. Its not like there are millions of employees at those stores, and there are far more polite ways of getting someone's attention even if you don't know their name.

What is wrong with people

Dear God,
Please let Incognito get another job so they will never again have to see something so trauma inducing.
KTHNXBAI,
Brick

Please let karma kick in for offers from both your interviews. I'll give you some of my points if I have any. *transfers karma points*

Good luck with the interviews! *shudders at mental image of picture*

Good luck with the interviews! So sorry for the mental image that i'm sure is burned into your Retina's for years to come!

Fudge, if you find eyeball bleach, let us all know, teehee!

You and Riferous collaborated on this, didn't ya? (see his story above yours)...