Restaurant Shift Hell: No Shifts!
Notice To Game Store Custys: What We Are

Dumb Custy Encounter at Self Checkout 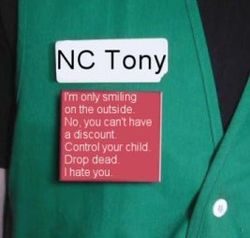 NC Tony here, and now I think I may have seen the dumbest person in the world last night at Wal-Mart.

I took a quick run to pick up a few things and decided to get in the self checkout since I had all of seven items. Begging that the woman and her kids wouldn't get in front of me.

And to make it worse they split up. The mother goes to another self checkout, leaving her oldest dumb kid in front of me. With one item, a bottle of soda and a gift card.

So he scans the soda through, hits the "Pay Now" button and swipes the card.

"It's facing the wrong way."

He looks at me like I just spoke Martian. "You need to turn it around."

So he manages to turn the card so that the magnetic strip is still facing the wrong way.

He then proceeds to turn it every which way except the right way, and swipes it through the card reader about 15 times, getting more and more confused each time.

Finally his mother comes back over, realizes what he's doing wrong and turns the card the right way and they're gone.

It took nearly five minutes for what should have been a thirty second self checkout.

I really wanted to shout at this kid: "YOU! Out of the gene pool!"

Meh, kids are thick. The kid didn't cause a fuss and the mother sorted it out as soon as she noticed.

I don't really agree with putting up a story about a kid who is perfectly nice if just a bit thick sounding. It could have been anything - maybe this was the first time he'd ever been trusted to put through the card and the mother was trying to teach him responsibility. We could use a bit more of that.

Sure it's annoying to have to wait a few minutes but it's not exactly retail hell?

There are EIGHT ways you can swipe the card. ONLY EIGHT.

People still mess it up even if there's a picture (which there is at all walmarts) and have to do it ALL 8 WAYS before they get it right.

eh he's a kid.. though my favorite are the grown adult who do this when swiping their card on our pin pad.. many cannot swipe the right way and some get mad when i tell them the card goes the other way..

It really depends on how close the parent is...some do not like you talking to their children. If you are close enough to see how the card is being swiped, you could try saying "the stripe on the back of the card should be facing left" (or whatever).
On another note, if a parent wants to teach responsibility, she should be sure the child is able to do what's expected. If the child has never used a gift card, that parent should have shown him how before walking away. Since the child only got ONE item, how much longer would it have taken for the mother to stay at the same register and show the child how to use the card?
On the bright side: at least it was only one child, and not 4 or 5 with cards, and all needing extra money because they didn't have enough on their cards.

I agree with Katie: the genetic donor should have stayed with its spawn...

Ughhhh kids are the worst sometimes. I made a poor choice in college and now have B.A. in Elementary Education and guess what? I am NEVER using it. EVER.

...We just got self-checkouts in the new Fresh Food People store here. First time I've ever seen them.

They're scary! I had no damn idea what I was doing... but neither did anyone else, so I guess that's somewhat comforting.

Meat on quick-sell prices messes up their weight system though, I did learn that.

did i see a "FML"? FML (fuck my life) is the first site i check every day. then onto the customer isn't always right, then on to RHU, and finally off to fark.com.
all 4 of these should be required reading.

my grandmother is weird with the credit swipers
she does it the right way, but even though she ALWAYS HAS TO PRESS OKAY at EVERY store we go to and she's used them for YEARS, she ALWAYS swipes and says, "Do I press Okay, or Back?" -cue brain explosion-

I've given up. I hate shopping with her.