Riferous: Great Day In The Morning 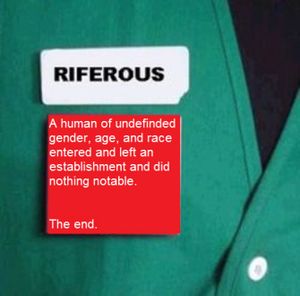 Great ways to start your morning: Rolling into the parking lot at 7 am, there are 4 cop cars surrounding a car and a man in plain clothes, apparently the focus of their interest.

I wasn't real close to them, so I didn't get a good look at just how plain this guy's clothes were.

I see that one of the cops is a detective who works security part time in our store, so I go to see what it is all about.

He said "This is not how I wanted to start my day!"

It seems that our guest this morning was serving up breakfast - sausage and eggs served with a side of hair pie.

He had walked into the store wearing a t-shirt, flip flops, a small women's thong, and short short booty shorts.

With his package unwrapped.

The cop said that he used a phrase that he never thought he'd have to use in his career in law enforcement: "Dude, your junk's hanging out."

The young lady who donated the garments was, according to the brave young soul, "probably under 100 lbs".

The shorty shorts ripped when he put them on.  Yeah.

Our generous provider of morning hilarity had been drinking with his friends until 5 am.

At some point in the wee hours somebody made a bet of some sort, the stakes being that the loser would have to give the early morning denizens of Groceryville a show in garments not belonging to them.

And so Mr. Miss was toted away to the drunk tank and charged with public intoxication, incarcerated with other like-minded individuals who, I am sure, had alternate ideas for his breakfast buffet.

Actually, I shouldn't call it a buffet, more of a value meal - I heard it was a bit on the small side.

And I have no desire to try the juice.

The pharmacist said it was like looking for a button in a forest.

A couple cashiers said "All I could see was a big ball of fluff!"

Eventually I realized that he had to be on tape at some point, so I went upstairs to "roll that beautiful bean footage".

The best I could get was the attached picture.  Not that I really wanted to see it anyway.

After a while I realized that he was going to be locked up until he got sober, and they probably wouldn't give him a pair of pants. I guess he could have called his friends to bring some, but you know what? They were smart enough to book it out of the lot when the cops showed up, and I really doubt they would have walked into the station in the same condition he was in.  Maybe they tracked down a spare blanket for him.

The cop did say that they were lenient and didn't charge him with indecent exposure, saying there was a difference between some dirty old perv and a dumb drunk kid.

Until next time, enjoy your meal!

He's going to regret that when he sobers up... or if he's really stupid he'll think it was great fun.

I almost spewed coffee out my nose laughing at this! "ball of fluff".....LMFAO

I don't think that's too bad. I mean, come on! Almost everybody did something more or less stupid when they started drinking. Most of us were just lucky not to get involved with the cops.

That made my entire day.
And yes, most definitely not trying the juice.

Well...I was going to make something to eat...

PERFECT story to read when I just woke up...
I got my new boo drunk last night, but he just puked everywhere and wanted sex. This is much funnier. I don't know what I would have said if he just walked into a store I was working at like that. Probably gawked, then cracked up.

And this, children, is why one should drink in moderation.

I freaking love the name tag. That and this story made my day :)