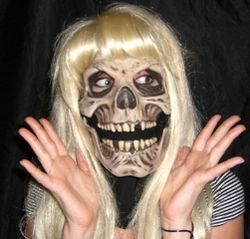 I was reading back through some of the Not Always Right posts, and remembered a time when I felt embarrassed for the poor retail slaves my friends had abused. This was over 6 months ago, but it still pissed me off to think about it.

New Year's Day, still up and partying long after the ball drop. Quite a bit hungover from the previous night so we started right up drinking again as soon as the clock hit 5. Around 7, after playing drinking games and dancing a bit, we decided to order pizza. We took orders from everyone and my friend called to place the order.

We eventually get the order after some more partying (I was dancing with smiley-face balloons, there are pictures SOMEWHERE...) and pizza dude shows up.

We pay him, thank him, go in to eat. Open the wings boxes to find that for 2 boxes of wings, we only have one cup of Bleu Cheese when we had ordered extra.

She FLIPS out. Calls the pizza dudes up, demands more Bleu Cheese, and FREE, and ASAP. Or else, yadda yadda, yackity smackity, saying "oh don't be rude to me" (I don't know what he said as I couldn't hear over her, but knowing her, he wasn't being rude at all) near the end.

Then calls her boyfriend and relays the conversation; huge amounts of exaggeration the whole time.

I timidly suggest we get started on the pizza, so we open up the boxes. Lo and behold, 2 tubs of Bleu Cheese per Pizza Box. We now have 5, not 1.

This is where I PERSONALLY would have called back, canceled the freebie run, apologized profusely, and been done.

She did not do that.

She waited for her boyfriend to get there, laughed about it, hid the extra dressing, and when the pizza dude got there? Her boyfriend yelled at the poor guy, then slammed the door in the guy's face.

When they came back to the table, everyone was laughing about it except me.

Like, argh, how could you be so fucking rude???

They did NOTHING wrong, YOU flew off the handle, and then you torture the dude by threatening actual physical bodily harm before slamming the door in his face?

-steam billows out of ears-

[Chris in comments, I figured out how to link to FaceBook :D]

Side note about a rude custy:

Was at a food store where my friend worked. He told a custy they were closed.

Custy said "fuck you" and smacked the hat off my friend's head.

If my friend acted that way, I would give them hell. Maybe you did and just didn't mention it...in which case, good for you. :)

There's a little thing called Karma.
And it can be a cast-iron bitch sometimes.

um.... sounds like you weren't much better... you let your friends act like that? I would have said if you guys can treat a stranger like that for no reason I want nothing to do with you guys, and as soon as her boyfriend acted like that I would have walked up to him told him to shut the fuck up give the delivery guy a 10 or so and then most likely hit the guy.

She was a big, scary, violent girl that I did not like to anger. I am no longer friends with her, for many reasons like that.

If I had said anything, nothing would have changed except that I also would have been yelled at, then forced to apologize for "going against Homies"..... whatever.

And this is why I have no friends. I always call people out for behavior like that.

After me and hubbs read this we just want to jump that dude and beat the living fuck out of him! I really wish I could be a Bouncer/Body Guard for deliver people. Oh, I would "bounce" people all right. Right out into the fucking street! Guaranteed they wouldn't last a minute, no a microsecond in the delivery guys shoes. Me and hubbs agreed that if one of our friends EVER treated someone like that, we would apologize to the worker, give em a 50 if we had one and jump our friend IN FRONT on the guy. Give em a taste of their own medicine. There is no sweeter taste than revenge on thy tongue. Man, the waste of protozoa these days. See, and this is the thing. Most of my friends are bigger than me. My one friend is almost 300 lbs, my other friend is almost 400. Then I have a friend whop is 6 foot something whom we lovingly call "The American Yeti". Regardless of how big they are I would still jump em anyway. I am a shorty too. I am like 5'3' or 5'4'. Compared to just about anyone else in my life at current I am the youngest and the shortest. I'd still whoop their ass. I have legs of cast iron, abs of steel, and arms of brick. Let me at em for a minute they might just think twice about being a douche after that.
(Many apologies for flying of the handle. I am a combination of bi-polar, ADHD, and ADD. So sue me.)
I hate bad manners!

I'm glad my friends aren't like that, but my mother is horrible. I don't work in retail, but I read through to make sure she's never on this site. I try to be really nice to make up for the bat-shit insanity that my mother brings to the table.
Eh. That sounds awful.

If I had friends (as opposed to friendly acquaintances), I'd have a two-strikes you're out rule with them:

They act like a bitch to the slaves once, I give them a stern lecture about it and see if they learn a little empathy. Do it again, then no more friendship.

People show their true colors when they feel they have no consequences. So, in a way, going shopping with your buddies can be a good test of character.

Note to self - Do NOT let Alison, Kuriko, and OMNION be in the same room at the same time when an asshat is present! (Unless I want to clean up blood stains...)

Glad to hear you dropped the "friend".