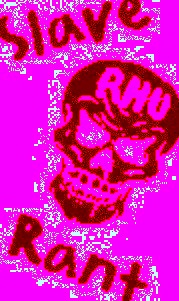 Guess what! Gas Peddler is also a DJ!

Believe it. I work for the school's radio station hosting a heavy metal/old-school punk/electronic show along with doing some tabling for concerts at the bar and plugging around campus trying to fill time slots. A really nifty thing about our station is that Top 40 is FORBIDDEN, meaning any song that is Top 40 or has charted on Top 40 within the last ten years.

So if you want to hear "Fireflies" or "Dynamite"...suck my dick while I play some Amon Amarth instead.

Another cool thing is that we ARE allowed to play covers of Top 40 songs. I once played a metal cover of "Toxic" and got lots of lolz.

Most people around here understand that we are strictly no Top 40 and thatif you request something forbidden (or that has swearing before 10 pm), we can't play it. Otherwise, I will happily take a request for the Barenaked Ladies between Eluveitie and Cradle of Filth. It amuses me. Chuckle,chuckle.

So I was working the midnight-3 am slot one weekend during a school break since I wasn't going home for another day and was bored sitting around in my apartment. I did the legal ID (where we read our call letters and the frequency, blah blah) and said the number for requests and went on through my playlist.

While the music played, I was organizing the vinyl room because nobody ever does and I saw the phone light flash.

I picked up the phone and heard a drunk girl giggling.

"Why won't you play the fucking song???"

I told her again that I CAN'T and she proceeds to bitch me out some more and say that she's going to come down there.

I'm not too scared, but I lock the station and make sure I have a working phone and the number for campus police in case she made good on that threat.

It turned out to be an empty threat, which I expected. It's not the first time I've gotten a drunk call and it won't be the last. Usually they're too drunk to even speak coherently.

Don't get me wrong; I love everything about this gig, even though I am still incredibly gawky on-air. It would be AMAZING to work for a legit radio station someday...and dream I do.

The fact that you play Eluveitie makes me love you! :D

Next time, tell her she can win Gaga tickets if she emails you a compromising photo in the next 20 mins (presumably, while she's still drunk enough to do it). It'll be something fun for the website.

I wish you were at our campus! we only have one metal show a week right now :c

My fiancee named our dog after the song by Eluveitie. Her name is Mona.

I would call in with songs from the Billboard Top 40...

In short, I would request a LOT of classic rock!

That sounds like an amazing station! If I hear that damn Airplanes song one more time I'm gonna pop someone!

i did the college dj thing for five years (transferring kept me in college an extra year) and i had several strange phone calls.

the weirdest thing, though, was the letters i used to get from the prisoners at the state penn the next hill over. marriage proposals and all...i was glad they didnt have access to a phone to call me.

Who doesn't love Sonata Arctica? Baby kind of put my plans to get a double A and "the dream is alive" tattoo on hold. For now.

You should add some Turisas to the mix for the drunkies; they may think war broke out. At any rate, Rasputin is funny as hell, and a cover. But Battle Metal and Miklagard Overture are probably their best. Very barbaric. What can I say, I'm a berserker at heart. Well, a Finn. Same thing. :)

Turisas is good for drunkies, but you can't beat Korpiklaani for drunkies in my mind just because of the number of songs talking about beer (Vodka's a good song, don't get me wrong, but "Wooden Pints," "Happy Little Booser," "Let's Drink" and "Beer Beer" just beg to be bellowed when drunk).

Got to see "White Pearl, Black Oceans..." in concert (first time they played it in person, too). Just about died, that song is in my top songs of all time list.

Miklagard Overture rocks, but we play Rex Regi Rebellis around these parts.

righteothen - where the heaven are you? I would say hell but that sounds...wonderful. They only play popular shit and that horrible noise disguised as "country/western".

Tony Kakko (SA) is a god among men. Enough said.

I don't think working for a "legit" radio station would be "amazing." Most of them don't even HAVE DJ's. They use carts of syndicated guys who "DJ" for the whole country. And yeah, they're using computer DJ's now. And you can't play anything you want. And the stations get sold and switch formats like you change your underwear.

Even some NPR stations--half the time you're just cuing up national shows.

I hear, from the professional DJ's I've talked to (I've been wanting to get into radio myself) that all the fun is in college stations. But even then, they're regulated up the wazoo. When I asked one of them if radio might be a good career to pursue, she said "no." What a letdown.

yay a fellow DJ! I have my certificate in broadcasting.

One mistake people make really is tknking they're going to be on-air. What people don't realize is that it's really all about who you know, and are you willing to be someone's bitch for a while. Everyone in the biz starts in promotions. I mean EVERYONE. It's good to dream big, but you gotta do grunt work first.

I got my certificate 2 years ago, and have never had a job in broadcasting.

Well then, I'll enjoy it while I'm here, ha. And believe me, I know all about grunt work...I do.

The nice thing about my school's station is that our regulations are fairly minimal. Obviously, we have to comply with the FCC's rules on naughty language and whatnot. In addition to that, we have to play about two minutes' worth of sponsor tracks each hour plus four different artists from the "New Music" section each hour. Apart from that, we have a good two hours to do more or less whatever we want. I know a guy who has a specialty show featuring old-time radio dramas and period music. FUCKING RAD.

Sisu - I'm in the middle of nowhere. "Around these parts" is basically "me, my husband, and his friends blaring music." I think of it as a public service, hehe (luckily my closest neighbor likes rock and metal).

"Tony Kakko (SA) is a god among men. Enough said." And the metal sayeth, thou shall sing in falsetto, amen. I don't care if I'm a girl, I wish I could sing like him (kinda like Dark Moor before Elisa left, except better).

This reminds me of a funny story. I used to be the sole roadie for a local band back in New York. The lead singer used to invite me on stage to sing a song or two with him. Anyway, they had just put out their first album, and a college radio station in New Jersey invited them to play a live set on the air. They had to change the words to three of their songs (three of their songs had "fuck" in them, and one had "shit") The dj told us while he was playing some songs after the set that one local band was told about what they could and couldn't say on the air (think Carlin's seven dirty words). The band showed up drunk, and the very first song they played was called "Fuck Shit Cunt". They were not invited back.

*hand up* I'm the person who doesn't particularly like Sonata Arctica. Sorry, guilty. No particular reason, just never clicked for me. Eluveitie and Amon Amarth, however, get you major respect in my books. For the lulz I think you should play Children of Bodom's cover of Oops I Did It Again... and more seriously, try some Amorphis, too. Skyforger is a wonderful and too-little-known album.

Bodom recently toured here with Machinae Supremacy, Amon Amarth and Ensiferum. I was front-row and dead-centre in a 200-person venue. It was glorious. Particularly when I found out, accidentally, that Petri Lindroos doesn't wear underwear. And then ran into him at the merch stand after the show. Didn't know what to do with my eyes.