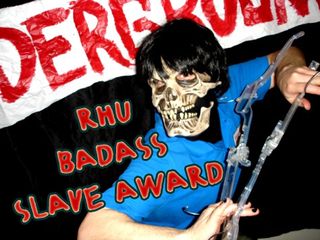 You've asked for it RHUers and so it here it is!

Dedicated to posts revealing Retail Slave Heroics, it will also include Custy Slaves Rescuing Other Slaves From Horrible Custys, Slaves Helping Their fellow Coworkers, and and other inspirational Slave and Custy stories - in short - it's about how badass we all are!

We don't hate custys (except when they piss us off), we just want to give them great service and help fulfill their needs.

So the first Badass Slave Award goes to Emoo, who did an amazing job taking care of a couple she, at first, mistook for rude crustys:

I've been super busy with college these past few weeks, and my availability sucks due to said school. So I get about a shift a week. Blergh. It's actually all right though, since I spend most of my time in the art building drawing for hours....stupid art major.

Anyway, just a short little story because I was so amused by it yesterday.

I went in to work on Sunday, and had one of my first "big" sales. I mean, it wasn't a 5000 order, but it was respectable enough that my manager gave me a fist bump (he's sort of cool like that) and told me I done good.

Towards the tail end of my shift, I'm hanging around the e-readers when I see this older couple.

I turn into Helpful!Emoo and ask 'em "How may I help you today?"

I figure they're being rude crustys, and start to turn around.

The husband catches sight of me, and starts gesturing to his ears and to himself and his wife.

Now, naive as I am, I ask over the radio if anyone knows sign language. Course, no one does, but these people came for a TV.

I basically sold them a cheapo little TV through a combination of crazy looking hand movements and half legible scribbles.

They were by far the nicest people I'd encountered of the day, made even better by the fact that they didn't whine and moan as custys are apt to do (even though I doubt they would have if they were able to speak to me).

I think they were grateful that someone made an effort to try and help them, instead of staying away and letting them go on their own.

That's awesome of you to help them out. :]

Considering how many people actually are deaf, you'd think employers would give you some How To Communicate 101... at least a pamphlet or something. I mean, jeez, they have to buy stuff too!

But back on topic - this is an awesome story and you definitely deserve the award! (And recognition from the higher-ups for going above and beyond.) That must have been extremely difficult, but you know it made their week. Or month!

Callista: Nope, if there's ever a communication problem, we have to hope someone is on shift who can translate or help. It's a nightmare when we have no spanish-speakers sometimes.

Magical Shrimp: I didn't get any recognition, since it was a tiny sale. But it was fun to do anyway. :)

You may not have gotten any *official* recognition, but you know that to them you did the best you could despite not knowing sign language instead of leaving them to their own devices and possibly to a co-worker who might not have handled it quite as well as you did.

Although I agree there should be someone who can communicate in a different language at work, perhaps a language card might better solve this problem. For example, one of those "Point to the language you can understand" pages, or even some basic translations would be helpful.

I know enough conversational SEE to help someone where I work. I told my manager that I'd be happy to do my best to sign if we have a Deaf customer, although I'm far from fluency. I also know a few guys I work with that are taking several years of Spanish in college, and are always willing to help our Spanish-speaking customers.

Also, although I'm happy you found a way to communicate with the customers, note that it can be rude to some people to whip out paper and a pen and expect them to communicate like that.

Fleurdelis: I didn't have the paper at first. I wasn't understanding their gestures at all, and after five or so minutes it was apparent that it was paper or nothing.

Emoo, I completely understand. I'm not trying to attack you for using paper/pen. It actuallycan be a good conversation method, however it's better to wait for the Deaf person(s) to initiate conversation that way, or to mimic writing, basically asking if you can correspond that way. Because ASL/English syntax is so different, not all Deaf are literate in written English (though it is likely they would be able to communicate relatively effectively). I suggest, for those employees out there, to just be aware of POP- Print On Palm.This means that you basically just hold out your non-dominant hand, and use your dominant hand to trace out the letters on it.

I didn't know about POP, or about the syntax. That's good info to know. Thanks. :)