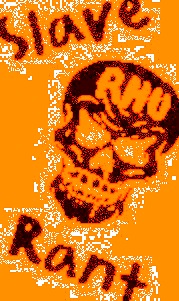 Here's a rant about people interrupting me.

I FUCKING HATE IT!

I don't mind so much when I start my spiel and they're cheerful in their interrupt, "Ooh Hi! Can I have the item on screen please?"

But when they interrupt like, "Yeah, the item on screen."

I had a customer the other day and I started to say, "Are the last 4 digits of your card..." and was interrupted with a "Yes they are, now please hurry up and stop asking questions."

I'm sorry, are you psychic?

You have four goddamn cards registered with us, you don't know which one I was going to say and I don't know what one you're using this time.

Also, these questions are important. I'm not asking you what you're having for dinner or what you did with your day. I'm asking you your name and address so I know that I have the right person. Now another mini rant about my supervisor, normally I love her to bits, she's funny and understanding, someone who's a good boss.

But the other day at shift change, she said something out of the ordinary. We were really busy - like super busy with bout 30 odd calls waiting and I had my Dad waiting for me. He'd just got out from work so I didn't want to keep him. I left and when I said goodbye, the reply I got?

"Oh thanks for leaving us in the shit."

I'm not sure whether or not she was being serious but it pissed me off a bit because I'm in early every single goddamn day.

Because it's always really busy in the mornings and they never have enough people on. But also because I'm one of those kinds of people that would rather be an hour early than a minute late.

And when I went in the next day and told one of the early morning gals who's in before me, she was pissed off on my behalf too, which I thought was really sweet. She told me how much she appreciated me always coming in early to help out even though I don't get paid overtime because it's my 'choice'. (I have to rely on public transport and it's not that reliable in the morning...)

But then some of the guys come in literally on the minute they're supposed to be on the phone's or even 5 minutes late, and as with all jobs, we're supposed to be here about 10 minutes early to turn on the computers, read any important emails etc...

But they don't even get told off!

Sounds like my company...
Come in early?
How dare you!
Skip or shorten lunch to help with a rush of custys?
Do it again and you're fired!
Stay late to clean up without being asked?
Keep this up and we'll investigate you for futher policy violations!
~
But come in late....eh, minor slap on wrist.
Leave early (without permission) Oh well...
Disspear from the sales floor for an hour...meh, whatever...
no wonder my company is going to shit.

This is why slaves end up with such much damn APATHY towards the job.

I love that you were told off for leaving when your shift ends!
I have to admit that I'm of the stance that the second the clock ticks over my shift, I'm done, and it's no longer my problem

Yeah, if I'm not being paid overtime, I'm not staying any later than I have to. This recently happened where I was almost made to stay way later than I was scheduled.

The interrupting thing makes me want to shit brimstone and fire, I definitely know what you're talking about.
It happens all the time in Drive Thru.
Me: And would you lik-
Them: A Pepsi.
Me: Ok, but would you-
Them: I WANT A PEPSI.
Me: ... INEEDTOKNOWWHATYOURSIDEIS.

I don't normally interrupt, but tonight I had to do it because my damn call center link kept getting off topic and task. I got transferred to the subcontinent, I swear. Would that be an acceptable interruption? I was buying a restoration CD over the phone, and we were about to talk how I could pay when the operator wanted to troubleshoot my computer more.

CCC: What time was I here again this morning?
Super: ...
CCC: That's right, 40 minutes early. And the day before?
Super: Early?
CCC: That's right. And the day before?
Super: Early?
CCC: Right again! ...and in fact I have been early regularly for ages to help "when you're in the shit."
CCC: I will be leaving now as my dad is waiting for me and you will see me at _exactly_ clock-in time in future until such time as I get an apology.

Ah, Su Chan, if only I had the balls to do that! But luckily, the manager went over the head of my supervisor and said she was sorry that they couldn't give me the overtime pay, but she was really grateful for me always coming in early! :D

It's aggravating when customers ask you a question and then interrupt your answer with another question...and do this repeatedly...

Oh my gosh, that sounds exactly like the beginings of what my boyfriend and our friend are going through!
They work at the same pizza place, they both show up early, leave late, cover shifts on 10 minute notice(they have to walk 4 miles to get to work) etc etc...

Two of their coworkers just got promoted.
Coworker #1 regularly calls out because she can't "get a ride" She lives less than 1/2 a mile from the Pizza place.
Coworker #2 regularly will call out because he "has to" go bass fishing in 10 minutes. Yes, he calls out 10 minutes before he is scheduled.

It astounds me how often retail managers have massive issues seeing the problems with their work force.