Misinformed Custy Gets The Facts Blue Light Bitch gets a Retail Balls Award for having the balls to speak up and educate a misinformed custy on a serious subject:

I finally decided on a name, So everyone can call me "Blue Light Bitch."

When they put me next to new people I usually keep an eye on them just to make sure if they look confused I can help instead of them waiting on supervisors.

Anyway I'm waiting on my customer to figure out how to use her credit card. (Call me a bitch but when you don't know your own zip code you just just give up on life)

Anywho as I'm waiting, new guy gets these customers: A mother, a son (about 17), and a daughter (about 16ish). Now these people look like the typical Jerry Springer white trash types. The son looks at our magazines and spots the new People magazine with a picture on the front of the guy that killed himself because of homophobic assholes.

He looks at white trash mommy and says "That's fucking stupid, you can go to jail now for bullying somebody."

Then the MOTHER says "What wusses, Words are just words. Whats wrong with everyone?"

I seriously wanna inflict bodily harm on them.

I go into a rage mode. I have many many GLBT friends and I know first hand the issues that they face everyday for just being who they are.

Not caring about getting written up, I swing around facing them with a look of "FUCK YOU" plastered all over my pretty face. I say very loudly "Maybe words are just words but did you know they also posted a video online of HIM HAVING SEX WITH ANOTHER MAN WITHOUT EITHER OF THEIR PERMISSION. If that was one of my gay friends, I'd be in jail myself!"

It was an epic win for me.

The look of shock on their faces. 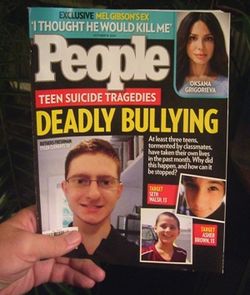 The mother looked scared and then said, "Oh I didnt know that, the media leaves that stuff out."

They got their shit quickly and left.

I will not tolerate comments like that. Its all ignorance and people need to stand up.

I personally think it's disgusting that people are still so low as to bully others to death over such insignificant differences. Thank you for standing firmly for that young man, and in turn, for all of us who battle with homophobia as well. I know I'm too timid to stick up for myself if I was to be confronted at work about my lesbian relationship. I want to learn how to be more aggressive about it, and knowing that people like you are out there is very encouraging.

Flex those Retail Balls, girl. You've more than earned this award, in my opinion.

I got to spend the majority of my elementary years beating the crap out of kids 2 grades ahead of me because my brother is "different" (diagnosed as behavioral disorder). Doesn't matter what you are being bullied for, it should NOT happen! If I saw it happen now, I couldn't physically do anything about it, but I can still put my "haggy old woman" face on and scare the little brats away until the parents could be contacted. Why it happens at all is beyond me. I have always been a "live and let live" kind of person. I just never figured out why someone felt the need to belittle someone.

Uhm the news actually did state that there was a video recording & that was the whole point of the bullying that led to the kid killing himself so those people are just ignorant. The kid actually went to my younger sister's college & a lot of students were very upset over the whole thing. Rutgers is very diverse & I know a bunch of people who go there that were really upset & disgusted over the whole thing. Plus, in the state of New Jersey it is illegal to video record anyone engaging in a sexual act with or without their consent so those idiots that recorded this kid already are in deep shit for that plus other charges. Ugh I still don't understand why in it's nearly 2011 and people are still so ignorant and homophobic and feel the need to bully LGBTs.

Good for you. Do this often and keep doing it until people realize this should be a thing of the past.

WTF, the media reported quite clearly and repeatedly that... eh, fuck it. Some people are just idiots.

Too bad it's illegal to remove them from the gene pool.

What was really sad about that case was, why did he not have anyone he felt he could go to? I've had a horrific roommate my first year of college, who mocked/bullied me because she was this little rich girl, but I had people I could talk to about it. Why wasn't there an RA or school counselling group or a friend? I think the school/community failed him too, which is something I thought every time there was a suicide at my school.

Part of my disgust with the coverage is also there's this implication that he died because he was gay. He seemed open and happy with his sexual orientation.

I try really hard to show support. For my 21'st birthday, I decided to have my party at the local gay bar I go to all the time. (Had a blast btw) But I got lots of ignorant comments, One being from my family in the middle of a restaurant "ARE YOU A LESBIAN NOW? ONLY GAY PEOPLE GO TO THOSE PLACES". I had a couple friend's ditch me because they didn't feel "comfortable".

I'm proud of myself for making my own decisions and not letting others ignorance get in my head. And unlike my family, I want to teach my daughter that it's ok to stand up for people who are "different" and they are the people that make life interesting.

I have had many GLBT friends over the years, and all of them have been open about their sexual orientation. In fact in most cases they could joke about it (like a co-worker and I were doing just last night), but if anyone ever gave them shit about it, I was the first one to step up and to tell the homophobic asshole to shut his mouth, or I'd be more than glad to shut it for him. It did get me into a couple of fights, but I never threw the first punch. I normally used the power of words to get them to STFU and feel stupid.

Good for you! Amazing how the least-informed have the strongest opinions, isn't it?

WTF is wrong with you people? This has nothing to do with him being gay; it has to do with him killing himself just because he was being bullied! Seriously? There is so much help out there, legal and otherwise, for people being bullied that there just isn't any excuse! Do you honestly think he was being treated as bad as the Jews were during the holocaust just for being Jews? Or maybe he was being treated worse than slaves (pick any country or year) were treated? Yet there are surprisingly few records of suicides in either case. While I do pity the man and wish there was something I could have done to prevent this loss of precious life, what he did was still very selfish and meaningless as "this too" would have passed if he had only had the intestinal fortitude to push forward, seek help, and believe in himself. For someone less educated or possibly just less verbal than I this translates to "what a wuss".