RHU DISCUSSION: TAKING THE FALL FOR A COWORKER
Rude Grocery Custy Gets Told 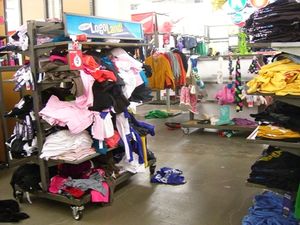 Hey all, long time reader, first time poster and all that. I work at a clothing store that rhymes with Cold Gravy (yum!), and have been for the last six months. I love my job; the customers aren’t that bad and my coworkers and management are pretty awesome. I get the occasional rude person or fucknut but nothing atrocious.

I just wish we didn’t have shopping carts.

We mostly have mesh bags, but we have some (maybe fifteen) shopping carts as well. Now, we don’t have a corral for them, they’re just lined up in front of the windows by the two doors, but even though there isn’t a sign you’d have to be stupid not to realize that the place they go is the place you got it from.

So, because there isn’t a blazing neon sign and detailed instructions on where to put the carts, here are some places people like to leave them:

1. In the middle of the fucking shop aisle.

The shops aren’t very big, and the floor space is backed with tables for folded and t-stands for hanging, so one cart is going to take up a lot of space.

Again, the FR is not vey big. Maybe seven steps wide with two aisles of rooms jutting to the side. People leave them in the middle of the floor. In front of the door (this kills me), completely blocking it. In the FR aisle, blocking all the other rooms. Fucking stupid.

3. Right in front of my register. 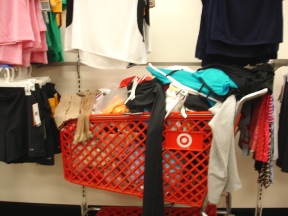 FUCKING REALLY?! You are that fucking lazy? Push it to the side and I’ll move it when I step down, but nooo you’re too lazy to move it all of four feet out of the way.

And lastly, because yesterday was eventful (maybe the wonderful Washington rain is getting to people, we had some lovely storms), a stupid bitchy custy.

So this lady comes through with some stuff she bought at another store that day, but they hadn’t given her the 10% (ON cardholders get 10% off on Tuesdays if they pay with the card), so she wanted to know if there was something I could do to give it to her.

So I’m annoyed cause the line is long and our coverage isn’t very good right now, and this is going to take awhile. But fine she seems nice enough, so I’ll help her. I clear it with my manager just to make sure and get started.

So to give her the 10% off her purchase the only thing we can do is return everything and then sell it back to her.

Relatively simple, but it’s going to take a few minutes. So I return everything after a few hiccups (a few items didn’t have tags and the previous cashier had entered them incorrectly on the receipt), and then start selling them back to her. 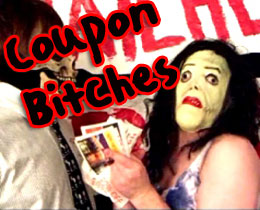 FML they aren’t working together.

Manager says the just won’t work together. Ok fine, nothing I can do, I tell her. So what do I get? A thank you for trying?

Nope, I get a prissy little bitch rant about how she had wasted her time standing there for nothing and why won’t they work *epic glare storm out*.

WTF am I supposed to do you stupid cunt? The POS literally will not let me do this. There is nothing I can do, and not only that, I just wasted ten minutes doing this on a fucking $25 dollar purchase so you could save a measly 10%.

In that time I could have cleared this line and gone home.

Oh yeah, she came through the line right when I was supposed to clock off.

Ended up staying an extra 20 minutes.

My jewelry counter is right by the exit to the mall so I am forever witnessing the stupidity of customers and their fucking carts. They leave them four feet away from the corral, leave them twenty feet out the door, they leave them by MY counter, and the stupidest is going all the way down to the Orange Julius before abandoning them. Like what, you forgot you were pushing them until you got your smoothie and then whoops?
!

I love this post, and I want to be your best friend.
I work for the same fucktastic store, and I can't tell you how many times I've said I wish we didn't have those godawful carts. How much clothing do people really need to buy at one time that they can justify a cart? And shouldn't parents own a stroller if they need to haul their hellspawn around? Ugh. Fucking ridiculous.
And I swear I had THE EXACT SAME thing happen with your coupon bitch. Except she wanted her 10% Tuesday discount, her CES Survey discount that she conveniently forgot at home, her TWO(!!!) $10 Bucks Back coupons, and since our store was running an additional 40%-50% off clearance at the time of her original purchase, she wanted that off too. My GM told her no and ran off to hide in the office, so I basically just handed her back the receipt and told her there was nothing I could do. I thought she was gonna leap over the counter and bash my head in. I mean, I guess I could have done a price override on her whole fucking purchase, but since she'd already been told no by the General Manager of the whole store, she just had to accept it. Apparently you can't do the whole 10% Tuesday thing with most other offers, and that's why the previous cashier hadn't done it. And I'm sure that she was told that too, but you now how telling customers valuable information goes.
I look forward to hearing more from a fellow ON Slave!

I share your pain. Customers will leave empty shopping carts ANYWHERE in our store. Granted half of our clients are old/fat people who can't stay standing without a shopping cart even if they're buying one item. My favorite was when we used to keep our carts outside next to the door and people would come into the store and ask where they were. Seriously? Did you not see the long line of about 50 shopping carts as you walked in? Didn't happen to catch your eye? Do me a favor, when I go blind kindly donate your eyes to me because clearly you don't use them.

I am so glad I don't have to deal with shopping carts. People are really, really dumb. For real.

Some of my favourite bitchy customers are those who get mad at you for something that you clearly cannot control. Like prices or coupons and other store policies. I usually remind them that if I could, I would change the rules because sometimes they are a little stringent but unfortunately I am just a lowly worker responding to the man's every whim.

I can't tell you how many people come into our store, walk right past the carts and baskets, and then when they do figure out where they are, after they bring their cart up front, suddenly forget or seriously cannot find where the cart corral is!