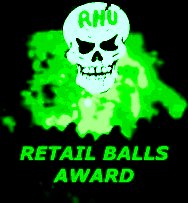 A Retail Balls Award goes out to a Gas Station Slave at the request of a thankful custy:

Although I'm long past my years as a retail slave, the memories still haunt me.

As such, I do my best to be a good custy and am teaching my daughter to do the same.  It's funny to see the looks we get when we're folding shirts and straightening shelves! :-D

On to the subject: I'd like to nominate a slave working at my local gas station for a Retail Balls Award!

This particular store has a certain large, bouncy Aussie animal as a mascot.

I was next in line to buy my coffee and a newspaper. It was early in the morning, and I was in that "oh-gods-why-am-I-up-before-sunrise" fog. I REALLY needed a double shot of whatever to perk me up.

As I approached the counter, a man standing between the registers steps over and says something to the effect of "give me the next one".

I learned later that he was referring to the scratch-off lottery tickets.

Before I could open my mouth and unleash my inner PMS'ed, caffeine-deprived bitch, the girl behind the counter pointed at me and said very firmly, "She's next. You wait your turn. Sir."

I could tell she probably wanted to say, "Back off, asshole, and keep scratching! God knows your balls are lonely."

Chastised, he backed off and I was able to walk up and ask how long the guy had been there.

The slave rolled her eyes and said, "He's been standing there scratching those things and trying to jump the line for about and hour."

She grinned and said she hoped so.

I finished purchasing and wished her luck with the lottery bloodsucker. She thanked me and we parted.

That's all for now!  I'll post some stories of my years as a jewelry slave when my befuddled brain can dredge any up. :-D  Oh, guess I should nickname myself... Hm, I sing the lowest part in my local women's chorus, so you can call me:

Ugh. We have these people ALL THE TIME in the store :C We only have a few guys, but a whole crapton of old ladies that do this. I'm sorry you got cut off - I always hate having to deal with that bullshit (I'm not allowed to tell them to go away - if they complain I get bitched at).

Kudos to that slave for tell him off, though - and kudos to you for being a great custy momma and teaching the next gen to be respectful and neat :D

I worked a very short stint at one convenience store where we had one guy who would put his lottery tickets ($200-$500 at a time!) on... his CREDIT CARD! That was on my one day off, and I was told on my next day in that this was no longer allowed. At least he was old and feeble enough that he would go sit down at the cafe tables to do his scratching.