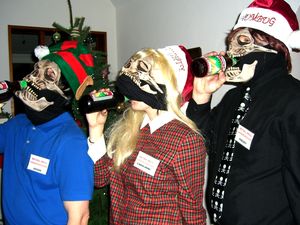 Queer Geek here with another hilarious story of retail hijinks!

I wanted to break away from the norm of regular RHU rants and do something different for change since it pertains to retail.

Now if you’re like me, you enjoy letting loose once in a while and letting your hair down by socializing outside of work with your coworkers.

Who else understands your plight of being exploited by crazy custys than your peers who slave to the grind while wearing plastered smiles on their faces?

A retail slave has a right to get their party on.

Can I get a what what?

You know what they say; the party gets started when retail slaves get together!

Since the dawn of retail time, I have partied with the best of them with my fellow co-employees at various retail companies so I speak from personal experience about my drunken days of retail debauchery.

I’m sure many of you reading this can relate! (Don’t act like you don’t know! I know I’m not the only one here! Not a word from the peanut gallery? LOL! You know who you are!)

One of my more intoxicated moments happened when I use to work for that red blemish of a star logo company Messy’s involving my friend who I refer to as Mary. 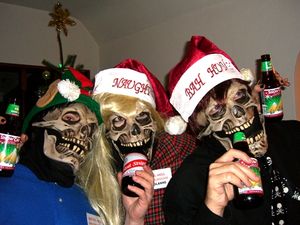 Now I worked at the fine jewelry counter while Mary worked in accessories. Immediately we hit it off and became BFFs. Anyway, Mary had just moved into her new apartment and decided to host a late night housewarming dinner with few friends from work.

Now understand this was Saturday night and word quickly spread around the store about the invite and the few friends turned into fifty attendees who began showing up at her little cramped apartment.

It soon became evident that the small little dinner was to be transformed into the wild party of the century!

Just to let everyone know how crazy the party became, the cops had to show up a few times to turn the ruckus down but to be honest I barely remember most of it since it remains in my head as a drunken blur except for a few images of me eating the pavement outside in the parking lot, hood surfing a moving vehicle, pole dancing a stop sign, hugging the porcelain goddess a few times, and finally passing out in Mary’s bedroom next to cute straight boy coworker whom I shall call Gordon. (For the record, Gordon, nothing happened, I think, but there was spooning involved. That much I remember. Oh and Gordon shave the five o’clock shadow! I think my neck got rugburns!) 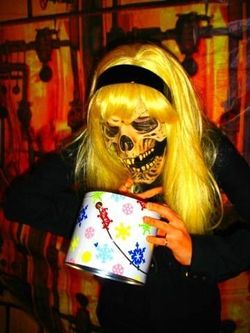 My other coworkers were not as fortunate as they all passed out on Mary’s carpet huddled in a puddle of vomit and looking like victims of the Jonestown massacre.

The worse part was yet to come as half of us had to show up for work the next morning to open up the store including myself.

It certainly was going to be an interesting work day. As we managed to clean the residue of puke, sweaty body funk, and wrinkled clothes that we wore the night before we finally arrived at Messy’s looking like the zombies from Resident Evil. (All you needed was a first person shooter carrying bullets of Red Bull and Vodka and the rest of us would be down for the count.)

Luckily for us, that Sunday was slow and most of the crazy custys cared less if our eyes were bloodshot and that we emitted an odor of Jack Daniels and gasoline as long as somebody would ring up their crap.

Meanwhile, my coworker and spooning buddy, Gordon, had the worst of it as a wave of nausea almost struck him every half hour forcing him to regurgitate his Doritos into the trashcan in the back stockroom.

Mary and I kept popping Midol for our hangover headaches and ended up taking turns falling asleep in the back office desk.

As usual, Messy’s department managers were not to be found on the floor so we were left to own devices as many of the other hungover employees kept Mary’s wild party hush hush.

You would think custys would notice but they were just as oblivious tearing up the store and asking annoying questions so in retrospect I don’t feel guilty smelling and looking like a wino but what surprises me is how the custys didn’t say anything about any of our hungover appearance. 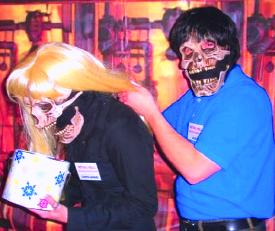 Epilogue: After this incident, Mary almost got evicted from her apartment but thankfully was able to salvage her relationship with her landlord. She is now happily married and living on the east coast and no longer works as a retail slave.

Gordon eventually moved on to Doomingdales (Messy’s high end company) after being offered more pay and still has yet to curb his partying ways from what I heard.

I finally left Missy’s (involuntarily but I’ll save that for another RHU post) for another big fancy company with better pay but I have calmed down considerably since then and behaving myself.

Though I still laugh about my debauched nights with Messy’s coworkers, it is a bit ironic that no one except the parties involved ever knew about the wild party that went on.

Well that was until now...

I've never worked retail, but having been in the restaurant industry for over 15 years, I am well aware of the drunken debauchery that goes on after a slave shift is over. There was one restaurant I worked at in Boston where a couple of the managers would sometimes open the bar for the staff after closing with free beer and well drinks. On other nights, we would all head to one of the numerous bars nearby and get trashed, only to drag ourselves home in time to do it all again the next day. Three or four times a week, we would blow all our tip money for a night to go out drinking and dancing. Ah... good times!

Ah going to work with a hangover. One night after work, a few mates from work got together for a good piss-up, my night ended at 3am after one whole bottle of "American Honey" (A Wild Turkey liqueur) and another 1/3 bottle of regular Wild Turkey, I didn't pass out or vomit that night. The next morning however, started with my losing my guts and than having the greasiest fry-up you've ever seen (Thanks John), and than back at work at 10am.

I've never actually been to work work with a hangover as I hold my drink very very well, but I do remember when I was still at art college attending a US election party with my fellow students and staff. My art college had a very informal relationship between staff and students, so it was more that we all hung out together and occasionally made something than we were actually formally taught. Anyway, the night the Obama election was on we all sat up watching it on TV, and for every state Obama took we took a drink of whatever drink was associated with the state. This meant we were up all night drinking a mixture of types of drink, and we had a seminar scheduled for 10am.

Because the tutors were drinking and partying with us, we knew that if we didn't turn up we would be denounced as lesser beings for not holding our booze, so come 10am we all lurched in nauseously and collapsed onto the seminar room sofas.

Enter the tutor. Who looked even worse than we felt.

'Excellent... well... I think you've all worked very hard today. Good work.' And with that the tutor lurched back out the door to go sleep it off in his office.

The bits about Gordon cracked me up something fierce. That sounds like my kind of party!

At one of my restaurant jobs, one of the servers threw a party and left an open invite for all staff. Mostly servers showed up, and we proceeded to get wasted, two people got into a fight, one of our very drunk co-workers wanted to drive himself home and it took five of us to take his car keys from him, and our hostess got into a fight with her boyfriend and broke up with him. I've been to other wild parties with co-workers (one where my boss passed out and fell asleep in the bed of the co-worker throwing the party), but nothing truly OMGTHATWASFUCKINGWILDIGOTSOWASTEDLASTNIGHT!

@Mistress Macha : gods, that reminded me of my college days in music XD One of our group music exams was actually at a bar. Bars=much booze before, between and during our performances and we'd also partake of Mary Jane in the back alley with our professors after all the bands finished playing and close the bar...only to drag our carcasses to class the next morning where our teachers looked just as cadaverous as we did. Those were the days.

I think we should have a massive RHU party and all get fucking wasted!!!! Lol it would be super fun and unfortunately we would still probably be better people than most of the crusties.

@Queer Geek: Been there, done that. When I worked at Wal-Fart, no one gave a damn if you were still drunk or hungover or high or whatever, as long as you did your job, it was like it didn't matter. I actually enjoyed going into work still drunk lol. I am a very happy drunk, and for some reason it keeps me calm and giggly ^_^