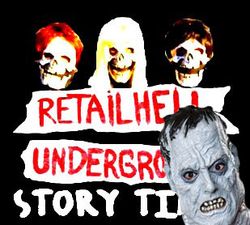 I'm back and with another job(which I actually LOVE), after being fired from the restaurant.

I work at a mobile phone store. While it has a lot of arsehole customers, my manager and coworkers are the most awesome people ever - and on top of that, this job doesn't require any bending over backwards for customers. I was told from day one, that we don't have to take abuse, we don't have to accept it and apologize while the - if a customer becomes abusive, we can tell them right off and kick them out. In fact, we can tell them off just for getting snitty with us (of course, we save the telling off for the worst customers, who are just difficult, but I LOVE being able to do so!) Of course, this brings me to my first tale of a crazy custy.

*Note, they aren't all this crazy. There are a lot of jerks, but this guy was quite the gem.

Guy comes in to pick up his phone that was repaired. I give him his phone, he gives back the loaner phone and he leaves. I wipe the phone, as policy, and then put it back out in the cupboards. About 30 minutes later, he calls flipping out because his contacts were erased from his phone. The conversation goes like this:

Him: My contacts aren't in my phone. Where the hell are they?

Me: Well, when your phone is sent out for repair, the service centre wipes your phone  - which is why we tell people to back up their contacts. 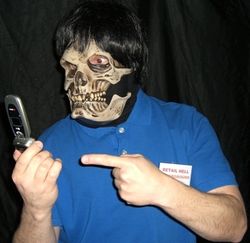 Him: I didn't agree to have my phone wiped, and no one told me that.

Me: Actually, when you give us the phone to be sent away, you're agreeing to just that. It says it on the paper we give you.

Him: I had hundreds of contacts on that phone. Are they still on the loaner ?

Me: No, I factory cleared it, as policy. Sorry.

Him: I didn't agree to that either ! Get me a manager. You just lost me millions of dollars.

So I give the phone to coworker, since manger wasn't there. She basically reiterates what I said, he then screams that someone's getting fired over this, and coworker slams the phone down.

Then about 30 minutes later he comes, throws a phone across the counter at me (it didn't hit me, but it was done in a hostile type way.) and demands I transfer his contacts over.

I can't do it because for one, the phone he wants me to do the transfer from is ancient. Two, our machine was down that day. He starts flipping out and screaming, calling us names and causing a scene. Coworker tells him to calm the hell down or we'll have him removed but he starts saying "Do it. Do it. Call security" thinking she wouldn't actually do it.

We call security, who had him removed from the mall and get this - had him banned! They had to threaten to get the cops over before he would leave, but he's banned none the less. As they were walking out of the mall, he was still screaming about his lost millions.

He called about 4 more times that day, pretending to be other people who "witnessed" this event (there was only one other guy in store at the time, and I know it wasn't him calling) and every time he did it, he was told to basically screw off and don't call back.

So, that was my crazy custy story. I do have a bunch of other stories of not so crazy, but rude customers which I will share as time goes on :)

I noticed I have a few typos in my story so if anyone gets confused by my awful writing and has a question , ask away !

My hat's off to you. Being able to tell off someone who's giving you crap without the risk of discipline, that's how all managers should be.

Oh wow, I'm so jealous that you're allowed to tell off assholes instead of suffering through their shit with a smile. Where I work we have to politely apologize for things that are not our fault with a simpering smile or risk customer complaints which lead to an automatic write-up.

I should also add, the manager is the one who sent out the phone and showed him how to save his contacts and told him they'd all be erased. So it wasn't a surprise for him.

I've got a ton of contacts, all of them important to me in my phone. I also have all their email address in my email account (with alternate contact info) and I have all that stuff written down in a planner. So if my contacts in my phone does get erased, I'm like logan, I have a way to reacquire them.

Why do they have to wipe contacts from a phone that goes back to the same custy?

Firstly, wiping the phone ensures that none of the repair staff will have access to the data and therefore that no unscrupulous (or impulsive and dumb) staff can copy contacts, view photos and forward them to friends, read text conversations, etc. It's a potential major liability for the company, though it's also a pain in the ass to customers.

Secondly, some repairs will involve replacing major parts of the phone (like the memory, for instance). In some of those cases, it's just not possible to retain the data.

If the guy had some sort of money, he would have had a better phone.

And I was never told I could talk back to customers, but I always used to do it if they deserved it. I operated on the idea that I'm a human, you're a human and we all deserve to be treated as such. If you can't abide by that, you're going to get told. Plain and simple.

All of the nice customers , we have no problem going out of our way for. Even the custys who have a bit of an attitude, we'll look passed it. It's when people become demanding and rude and abusive that they're told off. Just so no one gets the wrong idea :) we aren't a bunch of jerks ;p

@ chesh is exactly right. It's a safety issue and soemtimes just part of the repair.

That dude need some bangbang quick.

I kinda dig the one with the buellt hole but, Im also kind of a freak like that. Very cool! I would want one too!