Foot-Inspired Shoes: Would You Wear These?
Baby Clothes Clean Floors 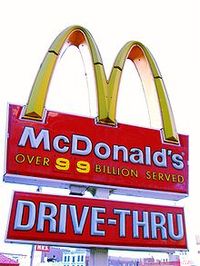 STRONGSVILLE, Ohio - An elderly man from Strongsville was killed in a freak accident at a McDonald’s drive-through.

The accident happened Monday at the restaurant on Pearl Road in Strongsville.

The Cuyahoga County Coroner’s Office said 86-year-old Richard Lowrie dropped his glasses or some change, while waiting in line at the drive-through and opened his car door to pick them up. He went to McDonad's, like he did most days, to get his wife coffee.

Lowrie then, apparently, hit the car’s accelerator and was dragged while hanging out of the car, the coroner said. The car continued on until it hit a wall, trapping Lowrie.

Construction worker Colin Hyle tried to rescue Lowrie. While police held down the brake, Hyle, who was operating a bobcat nearby, pulled the car away from the wall to free the man.

“What else would you do for that poor man, so I got him unstuck,” Hyle said.

Lowrie's family didn't want to do an interview with NewsChannel5, but said he was a very nice man and they're shocked by what happened. He had just turned 86 on Monday.

How horrible, that poor man. That sounds like a horrible way to go , and my condolences to his family.

And people wonder why I put the car in park when I stop at the drive-thru window.

That poor man! No, his poor wife! That's awful!

I'm so sorry to hear this happened. Being short, I never would have attempted this without putting the car in park. I know I wouldn't be able to reach the ground. A true accident. Something you just wouldn't think about ahead of time if you were a taller person.

Sort-of sorry to be a contrary voice but why was he driving anyway? If you can't manage a car at a stop, how was he managing the car in motion? Who opens the car door and puts their foot on he accelerator? Just stupid, not tragic. I'm sure he'll be missed etc.