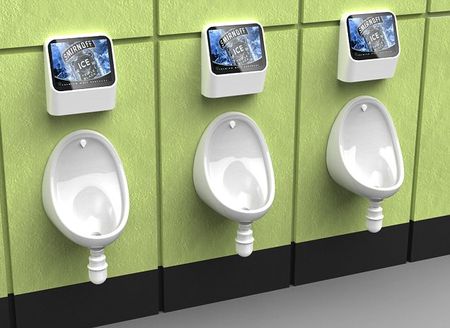 Reading in the john is about to get some competition as a favorite bathroom activity now that there's a new way to play video games.

A British company, Captive Media, has designed video games installed at bathroom urinals that men control with their stream of pee, the BBC reports.

Men relieving their bladders can aim at different sensors in the urinal to control the outcome of the game, according to the BBC.
There are three games to choose from: a skiing simulation, a trivia quiz with multiple choices, and a knock-down-the-penguins shooting gallery, The Telegraph says.

The average trip to the little boy's room lasts 55 seconds in Britain, giving just enough time for a short advertisement before and after a round of the video game.

The console was tested in Cambridge before being released at a London pub. The makers will open the floodgates to other bars and clubs in the next few months, Sky News says. 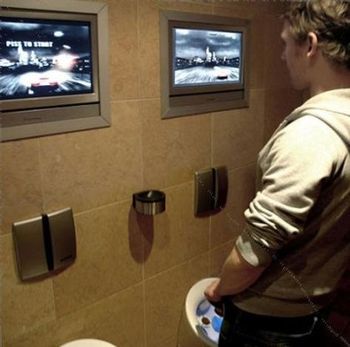 Give guys motivation to actually aim...should make the janitor happier in his job!

Does anyone else see that there are no drains in the first picture?

I can imagine guys walking in and saying "I'd hit that"

There was a news article awhile back that a company had "fly" painted in the urinals to give guys a target--and that it paid itself back many times in reduced cleaning effort.

Am I the only one that thinks that a game controlled by men aiming their urine all over the place, the urinal itself should be bigger? Like the size of a tub?