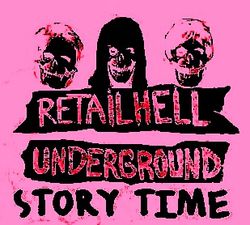 I've had to change my screen name to make myself just a touch more unidentifiable, following another blogger getting found out and fired for writing about work.

On top of that, I learned all facebook contacts can't be trusted either, as a coworker of mine had a facebook friend forward her facebook statuses (which were still quite vague) to our DM! Store manager denied knowing anything to the DM, claiming to have absolutely no idea who it was and therefore couldn't punish anyone - but if our manager wasn't so awesome, there could have been trouble.

Now, on to my wrap up of the most memorable customers for the passed few weeks. These can also serve as general complaints, as I get these types of customers a lot - but these are just specific incidents. 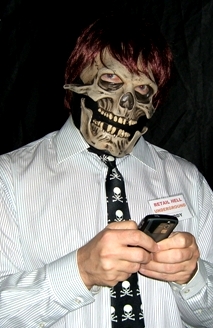 I had a woman and her family come in one night I was working. She informs me that she was just at an electronics store that just deals our phones, and something happened with the system down there when she was upgrading, so the store and our client care line told her to come up to us (a corporate location) and we'll just give her a phone. No, no, no.

I inform her that I can *not* do that and I'm sorry client care told her that (I won't call her out for lying on that, as client care does lie quite a bit ..) but I will check her acc. I find out they cancelled her upgrade from the electronic store so it's like it never happened and so when she came up to us, I just would have to re do the upgrade and she pays the fees, etc.

Here's where it goes wrong. Down at the dealer, they were offering the phone for $50 - as a dealer, they have the luxury of changing prices. At our store which is a corporate location, the phone was $89. She loses it when I tell her this, demanding the phone for $50. I tell her it's not possible, we don't price match. She starts going on, threatening to cancel her other phones, and then becomes even more pissed when I still won't budge at her threats. She also informs me that she doesn't want to pay this fee and that fee as well.

I tell her she has no choice but to pay all of these fees and if she doesn't, then she isn't getting the phone.  Once she realized she wasn't going to get her way, she left the store in a huff. Sorry, we're not going to pay for some dealers mistakes, especially when they have *nothing* to do with us. 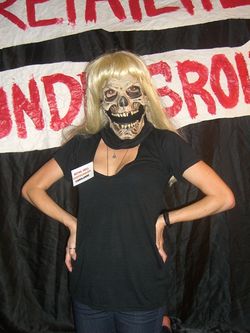 My second one I'll try to keep short as I think I went a bit over with the last one. Custys who don't understand that you need ID to sign a contract !

I have had multiple customers try and give me health cards, student ID, etc. thinking this was valid government photo ID. No ! A valid government ID will say the province name on it, have your photo, a master number, and will specify whether it's an ID or a drivers license.

Last but not least - if you remember a few months back, I wrote about a crazy custy who flipped out and then we had banned from the mall. A couple of weeks ago he tried to come in to our store and my coworker told him that he wasn't welcome here and he was going to call security if he didn't leave, now. I can't believe this guy had the gall to try and come back !

Do people not have brains anymore? Is there some genetic mutation that hit in the 1970's that deactivates the cerebellum?

I'll never be confused with Stephen hawking, but even i know that you need to show an actual ID when signing a legal contract -- like for a new cell phone. [My old one died, so I had to acquire a new one about a year ago.] I had no issue with handing over my physical driver's licence to the clerk so she could confirm it was me. What is WRONG with people today?

Just an FYI, this is my story :)I decided to change my name from caper, just to make myself a teensy bit more unidentifiable. Just to feel a bit safer when posting :) !

Here's my advice. NEVER POST ANYTHING ABOUT WORK ON FACEBOOK! Anonymity is your friend. Companies have no problem canning someone's ass if they discover the posts.

I'm always getting customers flipping out when I ask for an ID. I guess they want some stranger bleeding their bank account dry by writing checks at Hellgreens.

As for employers seeing facebook posts, IMO if they don't want employees posting how bad the company is to work for, they need to make the stores better places to work.

Um, when was the last time you were asked for ID when signing a credit card receipt ("I agree to pay card issuer ...")? That's just as much a "legal contract" as any cell phone agreement. Whether you need ID to sign a contract is a matter of store policy, not law, and different stores, different rules.

Chris, no idea where you live, but in Canada (where I'm going to assume the author is also from, by the mention of province), it is legally required to provide ID with contracts which require any money, paid or given.

Where I live, it is unreasonable to expect to enter a contract without ID. That's how fraud and identity theft happen and customers have no reason to bitch when I send them away for not having it.

In the southwestern state I live in, you pretty much have to have ID for any contract. Lease, phone, bank account, credit card, etc. because you have to show proof that you are and American citizen because of the high rate of illegal aliens. It doesn't matter if you are lily white, blond-haired, with blue eyes and freckles, you still have to have ID. They don't want you going back to whatever country you are from and leaving your debt behind.

@Humor_Me - that happens often around here with the international students from the other side of the world. That's why we need a social insurance number and government ID to allow someone to purchase a phone on a term or monthly basis.

A lot of them try to open phones on 2-3 year contracts thinking that they can go back to their home country and not have to worry about paying it.

Not just Canada...every state I've lived in requires a state-issued photo ID when signing stuff. @chris, dunno about wherever you are, but credit cards here have a spot to sign the back of the actual card. You don't have to have an ID to sign a credit slip if that's signed, since that signature authorizes use of the card. However...if that's not signed, or if the signature isn't legible, the cashier is required to ask for an ID. I mean, I know a lot of stores don't push that at cashiers...but every place I've worked, we'd get a slip of some kind if we didn't.