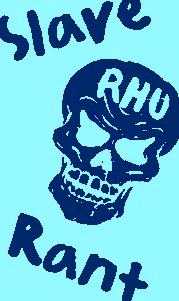 Hey ya'll!  Doesn't it always seem that the day back to work after a few consecutive days off  is always SO MUCH worse than a normal day?

Today ended up sucking for so many reasons.  I need to vent.

My coworker texted me and informed me she would be late.  I happily agreed to count her drawers for her, even though she was in a totally different department.  I arrive on the sales floor 10 minutes before the store opening; plenty of time to count co-worker's registers and move on to my own.  WRONG.

Literally TWO MINUTES after I began counting her drawers, one of the managers walked by with the keys, and sauntered over to the doors to begin opening them, a full 8 minutes before we were scheduled to open.

I remark "Um, manager, can't we wait until the time we are scheduled to open?  I am just counting these registers for someone else, I am not scheduled over here today. "  She replies "Well, honey, I guess you'd better stay up here then."

So, I get trapped in a totally different department by the horde of sunday-morning shoppers (don't these people have anything better to do than hang out in a parkng lot until the store opens?!??), meanwhile my money for my register is just laying around on the counter in my department, totally unsupervised, just begging for someone to pocket it.

Once I returned to my own department, I was greeted by my supervisor (one of two).  She began rambling off tasks and projects that had to be done, apparently by me.

Now, I fully understand that my role in the store is not only to perform my described duties of cashing people out and folding, but any additional tasks that my supervisor assigns for me.  I totally accept that, and I actually usually enjoy helping the supervisors do their stuff, mostly because its a nice break from ringing, and I get to dick around with the other supervisor, who is totally awesome.

However, the laundry list of tasks I was being assigned were specific tasks for the supervisor; they involved reading the plan-o-gram sheets that are sent from corporate and moving around tables, merchandise, mannequins, posters, and racks around to get our store to look like the pictures (it never does). This may vary by company, but in my store, this is the #1 thing that separates my job from my supervisors job.

So, I was really irritated that I am making minimum wage doing the work that is specifically assigned to my supervisor, who probably makes at least double what I do. It was so time consuming that I didn't even get around to folding the merchandise in my area (something I am responsible for, and cannot leave for the evening until it is perfect, even if it means staying hours after my scheduled shift) until half an hour before store closing.

While scrambling to make the place as neat as possible, I realized that I had been so busy doing her stuff that I had only taken care of ONE customer during my entire 9-hour shift.

Luckily, the retail heavens were smiling upon me today, and the department wasn't a total disaster, only a few tables were bad enough to need to be completely re-stacked, so I ended up finishing a few minutes before the store closed, which brings me to my last issue of the night...

This describes a situation I know MANY of you deal with - being the 'wrong gender' for a certain department.

For our favorite moderator (*winky face*), it was being a man in the handbag dept.  For me, it is being a woman in the men's suit department.

I understand men can be a little weary of having a woman measure and size them up, but it is done very professionally (we aren't even allowed to measure the customer's inseam, we have to use a calculation based on other measurements). 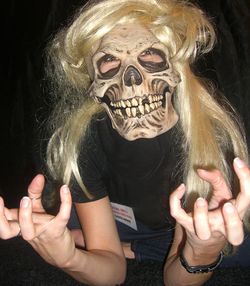 Frankly, I know what I'm doing, and I do it well.  I'm used to the typical questions:

"Where is the man who can tell us about these suits?"

"Isn't there a man around who can tell us what size we need?" , even though I'm wearing a nametag that says "Penneyslut: Men's Suit Specialist" and currently measuring a man for a suitcoat.

But in the last few minutes before the store closed tonight, I witnessed something so comically sexist that I wasn't even offended.

I was standing by my register, waiting for the word to begin counting down.  Three younger (~23, 24?) customers walk by, and stop about 20 feet before my register.

Note that my register is very unique-looking.  It is more of a vary large cubicle that is cut out of the wall.  It has its own doors for its own stock room, and several fitting rooms.  The wall has a huge sign saying "Men's Suits & Dress Clothing".  I am standing behind the long wooden desk that says the same thing, and I have a men's suit nametag as well as a tape measure adorned around my neck.

I hear these customers debating "Well, should we ask her for help?  No...can't be.  Are you sure? No man, I don't think so.  What would she know about them?"

I stand there, laughing to myself, as the customers eventually decide it is better to walk up to the JANITOR, who is loading up a 5' x 8' garbage can, and ask him where the suit vests are, than to ask the woman behind the suit counter, CLEARLY assigned to that department.

The janitor, not bound by our customer service bullshit, gives him a "whathafuckkk" head turn/eye roll and says "damned if I know....why the hell would you ask me that question instead of that worker over there?! "

Thanks for listening, as always, RHU!

As for your supervisor... not much you can do unless you want to go to her boss and ask him/her why your supervisor is trying to shift her job onto you when you're not getting paid to do it. That could work... or it could blow up in your face. So I don't know what to recommend.

Kudos to the janitor. As for the supervisors not doing their job, I'd like to see what happens if you purposely screw up the moves and the corporate lackeys come in and rips them a new one!

those are both good suggestions...unfortunately i only hate 1/2 of my supervisors....and the other one i love like a mother lol. so i wouldn't want to fuck her over

I'd have no fashion sense at all, so I'm constantly having my female coworkers pick out ties and dress shirts for me. I'd jump all over a female associate to help me with my suit rather than a male because I'd feel like he was judging me for not know what or how to wear things.

It's interesting growing up working class and trying to conform to a middle-upper class lifestyle when you don't know how to fit in.

What kills me is that I've been a seamstress since age 14! It's my goal in life is to own a handmade clothing and gift boutique! For this reason I was the only one competent enough to measure bras OR suits at work. And yet every third old man would try to aruge with me about how "it wasn't proper" or "I didn't know what I was doing". I was never too nice about it either when I let them know that I've been doing this for damn near a decade and if they didn't know what they needed then who were they to tell me if I was able to do my job? I stopped just short of telling on particularly assholish old buzzard: Sir, I'm just measuring your inseam. The only desire I have for contact with your shriveled cock is to perhaps punch you in it." Thing is, they were never disappointed with the suits I fitted them for.