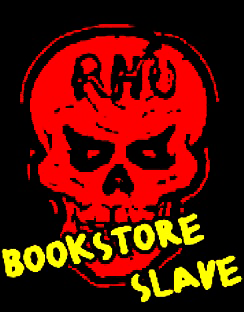 While these can be associated with anything relating to retail, these were the reactions at Bookstore Slave's Hoarders every time there was an Inventory night.

However, such Inventory took place starting at 5pm, and ran till 6 am.

Even with an hour's unpaid lunch break that's fucking miserable. And let's not forget that from 5pm till 11pm, the STORE WAS FUCKING OPEN TO CUSTOMERS! What the fuck man?! So you've got people meandering around in the store, pulling shit off shelves, wandering off with stacks of shit that may or may not have been scanned into the system yet, snarling at the poor Inventory slaves who are "in the way" or otherwise obliviously tripping over or kicking the slaves sitting on the hard floor and scanning shit on the very bottom shelf. 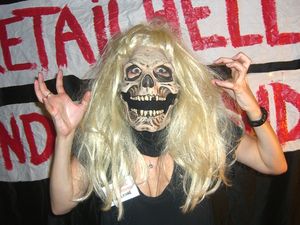 Add to this the bored shitless announcements every 15 minutes for 6 hours asking crusties to "Please forgive the inconvenience, our store is going through Inventory right now."

And employees...who are just trying to get their jobs done... are doing the do-si-do with Inventory slaves who creep behind the already cramped registers to scan shit that's on hold or in aisles scanning the shelved stuff. Can we put the cardloads of go-backs away? Fuck no! Not till the Inventory slaves have scanned it. Then you may. Goddammit! Somebody found a pile of shit hidden behind a chair. Hey, has anybody scanned this cart of go-backs yet? Yeah? Oh sorry, I better leave this pile some-fucking-where for it to be scanned. DAMMIT! Some Inventory Slave is currently scanning the shelf where these scanned go-backs need to go. So now we gotta wait till the Inventory slaves pass the spot where this is usually shelved so we don't fuck up the scanning.

Don't get me wrong. It's not the Inventory Slave's fault that they got dragged in to do work at the same time as the Retail Slaves. Hell, they have the grace to be apologetic to the Retail Slaves as they try to huddle in the smallest space they can physically curl into to avoid bumping butts with us.

And then our store gets chewed out for the sheer volume of "shrinkage" aka shit missing or stolen that was supposed to be in the inventory but somehow never got scanned. Dude... we were open for 6 hours. You can't constantly shuffle the inventory while it is being inventoried and expect every item to magically make it into the  system some way, some how, with no misunderstandings.

And yes. PEOPLE STEAL SHIT! Since we can't beat the fuck out of anybody who may or may not be stealing, we're kinda Catch-22ed.

Well, that's just stupid. Inventory where I used to work was bad enough even when it only started after the shop was closed! How anyone could expect that style of inventory to be 100% accurate is beyond me.

One of the things I don't miss about Hoarders. I started to volunteer to open the following morning just so I wouldn't be scheduled for inventory. One year we could not find a price for a boxed set, so we had to call the only store in the chain still open-Honolulu!

I am currently working as an inventory slave. Perhaps I will write in about my experiences. Yes it very much sucks when their are customers still there. Unless you are a 24 hour store I don't understand why you would do inventory during hours :/

Inventory at my Hoarders sucked, but at least since it was a small store they waited til we closed! I'm so sorry you had to deal with that.

The other day I was at the Big Orange Hardware Store and noticed the ubiquitous inventory company that everybody knows there. It was literally the middle of the day, like 1:00 in the afternoon, and there they were scanning away. The slaves all looked so harried, I felt so bad for them.

Why in the name of Zeus's butthole would you do inventory while the store was open to customers?! GAAAAAHHHH!!!

As usual, corporate made a dumbass decision and they're not the ones who get screwed over trying to implement it. I guarantee if Top Management had to work retail on that day that would be the LAST time inventory was done while customers were still in the store.

Oh GOD! I hate inventory. We do the whole store twice a year were I work. Now I will say that our store does try to make it like a fun night--catered food and drinks all night; lots of sweets, they give you a bag of goodies like candy to keep with you. They also make a play list of song suggested by the workers. The inventory shifts are chosen by a drawing and many of my fellow workers are happy to be picked--but I swear I feel more like the hunger games--I hate it.

I'm not a night owl, and I swear by 11pm my brain hurts. To be fair I have children and I have to be up at 6am getting them ready for school. Between my oldest and youngest I've been getting kids up for school for 10 years now and my body is just awake at 6am, no alarm needed. So working overnights is a killer for me.

I've only had to do it once and I hated it. The other time I was drawn I was able to get someone else to take my shift. Our next inventory is coming up in a couple of months and I'm hoping that I will dodge that bullet again.

I hate inventory with all the passion of ten thousand burning suns. Luckily, for the last three years, I've missed inventory. It's not quite as bad at my current store as it was when I worked at the Bullseye, but from what I heard, the last two years were pretty bad.

Well, one place I worked started stock-taking (or inventory, as you call it) whilst it was still open, but this was done in a way that worked - by starting with the storerooms in the back, before moving onto the aisles where the stuff that didn't sell too well, but not before sealing those aisles off so customers or staff simply could not fuck things up, intentionally or unintentionally. The only staff that were allowed in an aisle once it was sealed off were the people counting the stuff there, and if a customer tried to duck under the tape to get something from there, they were basically politely told that they could get whatever it was tomorrow, but not today, sorry. After the shop was closed was when the rest of the shop floor got done, and anything like stuff to go back out or returns received that day were stacked to one side and counted at the very end, and actually dealt with the following day. This gave us the best of both worlds - the count could be started early, whilst the shop was still open, so there wasn't staff there until ludicrous o'clock, whilst also minimising or eliminating fuck ups caused by people shifting stuff around during the count.