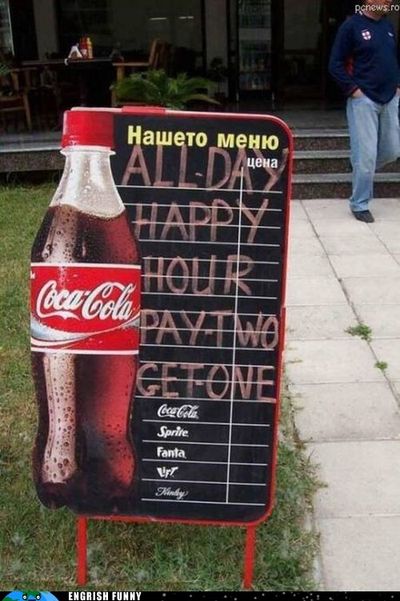 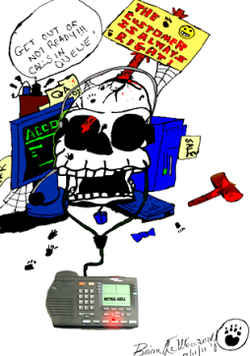 LaughingBarista here with a whole new kind of hell for me.

After leaving/getting fired from Nanny hell, I had to look for a job. It took me a couple of months, but I found a job at a call center on behalf of a really famous and large cable company.

It's important to note that I DO NOT work for the cable company itself but for the actual payment center which is employed by said cable company. Essentially, I am there to collect payments and let people know that if they don't make a payment, they can have their services interrupted. Once a customer who has already had interrupted services makes a payment, I can restore their services. Most of the time, however, is spent with me trying to get people over to other departments.

Now, I can go on for hours about how poorly run my job is. First off, there are over two hundred people working there but only four or five supervisors working at one given moment. Would you not find it unprofessional if you asked to speak with a supervisor and I had to tell you "I'm very sorry but all of our supervisors are currently unavailable to take any calls right now. Can I have someone call you back?" Those same supervisors are also the only people who are allowed to do transfers. So say someone calls the company number, gets rerouted to us (this happens a lot) and is trying to get tech support. They don't owe any money and just want their cable fixed. I have to try to contact a supervisor to get them over to tech support because apparently we're untrustworthy and thus, unable to do that ourselves. Many calls end with me asking if someone can call them back to get them over to tech support. 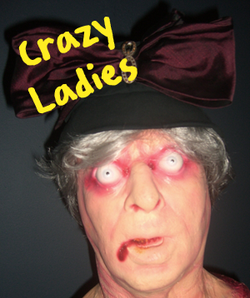 You'd be amazed at how stupid some people are. Like the people who have interrupted services and ask if I can turn them back on and "I promise I'll pay sometime this month!" You know, you get a service and give nothing in return? I didn't know that's how the economy works! How nice!

Me: Thank you for calling. My name is LaughingBarista on behalf of Cable Company, how may I assist you this morning?

Crazy Lady: I am so fed up with your company right now! I am on disability and only get paid once a month! I have it set up that I only can make a payment once a month on a certain day that month and this is the eighth month in a row that you guys have messed something up! I have been trying to get through to you guys for a week to fix my caller ID and that's finally fixed but now I have a new problem and I need that fixed now and I can't deal with this anymore! I just can't! I need to speak with a supervisor.

Me: Ok ma'am, I'd love to get you over to a supervisor but first may I please just have the telephone number associated with your account so I can pull up all of your information?

Me: Ma'am, sometimes when a call comes through I cannot see the number and thus, an account is not pulled up. That is why I have asked your for your telephone number.

Crazy Lady: That's ridiculous! Cable Company needs to get caller ID! Get me a supervisor! NOW!

Me: Ma'am, I cannot get you over to a supervisor until I have you authorized on the account.

Crazy Lady: Did you not hear me?! I want to speak to a supervisor NOW!!

Me: Ok ma'am, one moment please. Thank you.

This is when I go to contact one of the five available supervisors and would you believe that no one was available to take the call? So now I have to go back to Crazy and let her know the bad news.

Me: Ma'am, are you still there? 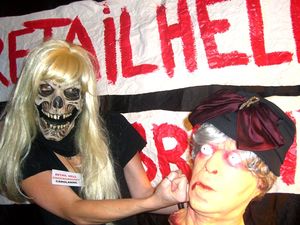 Me: Unfortunately due to the high call volume I was unable to contact a supervisor. If it's all right with you, I'd like to have one call you back as soon as possible.

Crazy Lady: You guys always say that but your company NEVER calls me back! NEVER! I've been waiting to hear back for a week and have yet to hear back from your company! This is ridiculous! I can't believe I can't speak with a supervisor!

Me: Well ma'am, you haven't actually reached cable company. You've reached the payment center on behalf of said company and I can assure you that as soon as my supervisors get my message, they will call you back. They're very good about that (this is actually true).

Honestly, what has happened to our world? 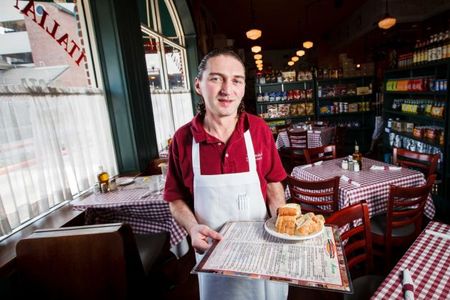 From Huff Po: Luckily there are some tippers out there so generous that we momentarily forget about out all the bad ones. One Houston waiter learned that firsthand this Memorial Day weekend when he received a $5,000 tip on a $26 bill -- that's a 19,000 percent tip.

The generous gratuity was left Saturday by a couple dining at D’Amico’s Italian Market Café in Houston, according to the blog 29-95. The couple were regulars at the restaurant and were often served by Greg Rubar, a waiter there for the past 16 years.

When the couple learned the Rubar's car had been ruined recently by thunderstorms, they were understandably concerned. According to the Houston Examiner, Rubar, who is married with a small child, had struggled with transportation ever since his car was destroyed and had been lately borrowing vehicles from coworkers and taking taxis.

"The couple, who do not want to be identified, thought anyone who has worked as hard and as proficiently as Rubar has for so long, shouldn’t be punished for something so out of his control," D'Amico's Italian Market Café said in a press release. "They had gone to the restaurant that night to present him with the money."

HoustonPress reported that Rubar burst into tears upon receiving the money. He is now shopping around for a new ride. 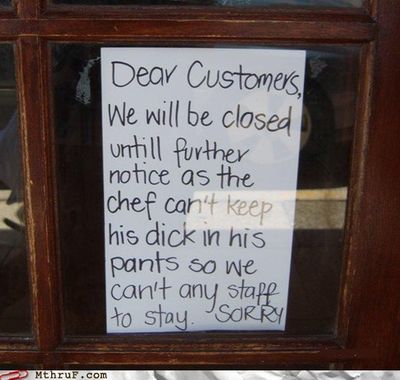