Well, I haven't posted in a long time. I hope you guys missed me as much as I have missed you.

And boy do I have a lot to share.

First, starting with the asshole ex-boyfriend who I never expected to hear from again, but did on Valentine's day of all days. Not only did he lie even more, but I found out that he was only 17 years old. Yeah, I could have gone to fucking jail. So if I wanted to rip his head off before, now I want to castrate him too. Then about two weeks ago he said he wanted me back and my response went a little something like this: Go hit yourself in the face with a truck.

Now, as far as my job, it sucks, flat out. While my health is improving slightly day by day, I still get times where I shake and tremble with sweats. On these nights I have to be sent home, which blows, but I deal with it and my managers have seemed to be a bit sympathetic. I have been told this was due to me standing around with nothing to do. Now, I pace around the arcade, looking for stupid stuff to do since I am on restrictions that prevent me from doing certain things. I am just biding my time until I can transfer out for good.

And for the biggest thing... policies. They are constantly changing and it is getting hard to keep up with it. Every single day there is something new, including things that are really dangerous for us to do. Example, when we banked out, we had to walk through the kitchen in the food court to get to the room. We are not allowed to do this anymore, having to go outside and around. This normally wouldn't be a big deal if A. The path from the arcade to the room on the outside was lit and B. Most of the cast members in the arcade weren't elderly and could actually see. If something were to happen, management would be in a lot of trouble. And on top of it, we are forced to attend these stupid meetings and training sessions that are actually not doing anything but wasting time. 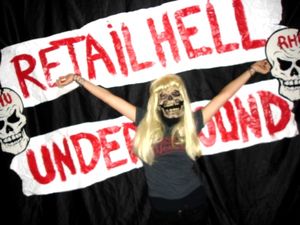 I also had an incident with a fellow cast member that I need to share. I will call him 'A'. A gave me a shift and did the form to switch it. It still wasn't showing up on my schedule the night before, so I texted him asking if it went through. I got no response.Next morning, the day of the shift, there was still no sign of the shift. Being the responsible person I am, I called my coordinator to ask if it was me or A on the schedule. He said that it was A but he was notorious for calling in and if I wanted it I could have it if he called in. I told the coordinator no thanks as I wasn't feeling 100 percent. On Thursday, I was looking for extra shifts to take when I saw it in black and white... I was supposed to be there on Wednesday when I specifically asked about it. Guess who got hit with notation for a no call no show? If you guessed me, you get a cookie. Yes, apparently this is entirely my fault because I knew about it and it wasn't up to the coordinator to know about the switch. Before you guys say anything, every switch has to be done 48 hours in advance and is computerized. If the shift is taken, it would show up on your schedule.

Now, the question is, do you agree this was my fault?

On a negative note, my depression has gotten a lot worse lately. I have been doing a lot of RPing online on tumblr and facebook because my life just sucks in general and it is the only way I can escape it. Message me if you want to know more.

On a positive note my excessive writing has gotten a lot of recognition from other blogs and even a newspaper in the Orlando area that wants me to interview for them. They said that my writing was impressive and original, really getting into the characters that I created. Personally I thought that my characters were really intense and some boring, but maybe I am being too hard on myself. Of course I get the stupid anons that say my writing sucks, but haters gonna hate, right?

Until next time... I hope you guys are doing better than me.

This may not be a popular opinion but if you agreed to take the shift, even knowing it hadn't shown up on your schedule, you probably still should have gone in. Even if it was a "just in case" situation and "A" did actually show up. It could have been a computer glitch or he could have forgotten but if he honestly thought that you would cover the shift then he's done his part.

Usually if I can't remember if I work, I'll call one of my coworkers and they can go check the schedule for me. Why couldn't the coordinator check to see if you were in it? You called and asked, and someone I am assuming is higher up than you told that it was someone else. You even said you didn't feel well, so that should have counted as calling in too, right?

Can't speak for anyone else, but I have missed you. :) I'm sure a lot of us have, you're a charter member of the RHU community.

Anyway, sorry to hear your life isn't going well. If you lived near me instead of on the other coast [I'm out in California] I'd do what I could to help. I'll send positive thoughts your way.

That's great about the interview, Redhead! I hope you get the job and things take a good turn. Keep thinking good thoughts.

As for the shift, seems like you did the right thing asking a superior to check and THEY are the ones who screwed up, so that nocall/noshow should be removed from your record immediately and the coordinator given a reprimand.

Have missed you too. :) Definitely not your fault; you called in and the person who should have known about it told you it wasn't on your schedule...

I'm kind of curious, where do you roleplay? I used to do some on blogs and whatnot, but lately I've been seeing lots of people doing it casually on facebook. And by casually, I mean people who can't even type a paragraph making their characters 'lol' with each other... I figure this isn't what you're doing, but it would be cool if I joined the same RP site.

Sure September Bade, I can give you a few links. It would be better if I could link you on Facebook though.

Madame, and September Bade, if you're interested in a role-playing game, rather than just freeform roleplay, I run a free site for people to play Old World of Darkness games, namely Vampire the Masquerade and Werewolf the Apocalypse...if you don't know how to play, it's ridiculously easy to learn, and like I said, we do not want your moneys.

If you want, my email's annalouhoo@gmail.com and I'd be ridiculously happy to get you guys involved. :D

Glad to see you back! Sorry you aren't doing well though.

If you aren't already getting help, contact: http://www.nami.org They can usually help find free or sliding scale help.

Congratulations on your writing! Who knew you had hidden talents. I hope to see a link to the interview.

Ew, that's the company's fault--just one of those things I doubt they'll ever own up to. It happens, I guess, and similar has happened to me with days needed off.

Keep going! Things'll get better, I'm sure of it.

Happy to see you back! Let us know more about your interview and your writing - I'm sure lots of us would like to keep up with your successes!

Boo to depression! :( I'm right there with you on that one. Here's hoping you feel better soon!

I'm rather curious as to what games you RP myself. I'm a HUGE D&D player and I'm extremely familair with Legend of the Five Rings and WoD as well.