Joe's Custy Spectrum: Apreciation and Praise to Weird and Crazy 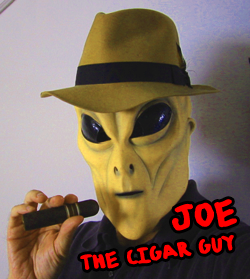 As you regular RHU'ers know, my stories have highlighted the more stupid and exasperating end of the custy spectrum. But, I've gotta tell 'ya, working at J.J. Legume has shown me a whole new world of really decent people. My co-workers are a hoot; they even got my scrawny Irish ass into a kayak for an extended trip up and down a local river!

Since Legume's is a specialty store, I haven't had to deal with the thugs ripping off high-end designer clothes. Custys generally know what they want. Some even bring the catalog in with them. They know and respect our brand and play by the rules. What a concept!

I recently made the acquaintance of an elderly customer who was in the market for some new shoes. We talked about this model and that and their respective features. He chose a pair of our popular canvas deck shoes and went on his way. Imagine my surprise when, the following week, a letter arrived at work in which he praised me to the sky! He said in part: "[Joe] had a professional manner that did NOT go unnoticed...[He] maintained the gold standard you have set for your sales assistants." Going even further, he had sent a copy of the letter to the CEO of the company asking that it be put in my personnel file!

To say I was positively flabbergasted would be putting it mildly. Everybody likes an attaboy every now and then, but holy smokes! My managers posted the CEO's response in the front of the store and in the break room.

Now y'all know I couldn't let you go without some tales from the weird side, so here goes... 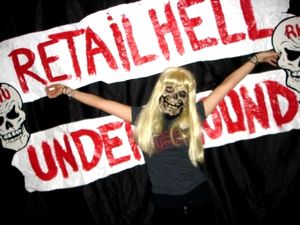 The other day, a kinda skeevy-looking dude was wandering around the shop. How skeevy you ask? How about a ripped, stained and foul-smelling wife-beater shirt, bright orange booty shorts, a two-week old growth of beard, flip-flops that were too small for his feet, and a tattoo on his left bicep that read, "FUCK YOU". Yeah, THAT skeevy! Anyway, the conversation went like this:

(It should be noted at this point that not only do we carry kayaks and canoes, but we have several attached to the OUTSIDE of the store, the pillars INSIDE the store, and HANGING from the CEILING of the store!)

Me: "Yes sir, we do. What kind were you interested in?"

Dude: "SEAL SKIN! Do y'all have seal skin kayaks?" 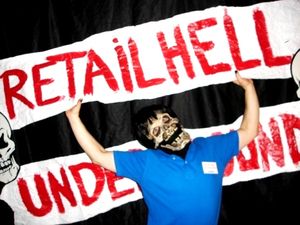 Me: "Well sir, for one thing, the cost would be prohibitive. For another, I believe it's illegal here in the U.S. for anyone other than the Inuit people to catch and butcher seals."

And he walked out muttering to himself.

A 20-something couple came into the footwear department. The guy was interested in some moccasins. The girlfriend obviously wanted to be somewhere else: "Why can't you get them LATER?" "Why is it called a shoeHORN? That's STUPID!" "Why don't you just buy some flip-flops?" "They're probably not even real LEATHER!" "Let's GO! I'm BORED!"

But her constant whining wasn't the first thing I noticed about her: girlfriend had the BIGGEST boobs with the DEEPEST cleavage on the smallest frame I've ever seen! Her motto must have been "When You've Got It, Flaunt It!" because the "girls" were encased in a black-and-white, horizontal stripe tube top that was holding on for dear life!

After they left to go wandering in the womens department, I was in the stock room shaking my head when a female co-worker asked what was wrong. I told her what happened.

Me: "Y'know, I almost broke my NECK trying to maintain eye contact with her! I kept thinking "DON'T LOOK DOWN!"

About ten minutes later, the co-worker called over the walkie-talkies we all carry.

How did the girl with the 24-JJ chest manage to stand upright? No wonder she was whiny, her back probably hurts like a bastard from supporting those things!

Seal skin kayaks? Really? I don't know what's wrong with some people. Although the best answer to that came from Cameron Poe when Baby-O asked that question about Garland Greene: Poe replied with "My first thought would be... a lot."

Joe [maintaining eye contact]: "I know it when I see it"

Okay, maybe the women out there can explain this, but why, why, why, why, why for the love of Arkvoodle do women wear tops that show off a generous amount of boobage, and then get mad when people look? If you put them out there, we (mostly men but women too) will look at them. If you don't want us looking at them, then cover them bad boys up!

Tony, I always wondered that too! Don't get it so much at B&N but back when I worked at a party store we'd get women who came in wearing no bra and the shirts that look like vests, wide open, and they'd always lean on the counter. What cracked me up about it was that they always flirted with our male cashiers, including the obviously gay ones!

I get the impression that seal skin guy had been through a lot of powdery white baggies lately.
As to the cleavage question, there's really no excuse, but I think part of the reason is that some girls don't think of their cleavage as a sexual characteristic. Women aren't as visually driven as men, so for us boobs are a bit like elbows. They exist, but who has the time to think about them? Add that to the growing percentage of women's shirts sold that are, ahem, of an immodest cut, and you get a world where showing off a fair bit of cleavage becomes normal. That's my theory, anyway.

The question about why women wear low cut tops but get mad when you look. Well, a lot don't. Trust me, women know what they're doing when they wear something that shows of cleavage. It takes effort to get the right look, so if you go to the trouble then you want people to look.
However, when you aren't purposefully trying to show off your cleavage is when it gets irritating. If you have bigger boobs they they'll be noticeable no matter what you wear. Want proof? Watch a few episodes of 2 Broke Girls. I'm straight, but Kat Denning's boobs catch my attention every time. It's especially irritating when someone like a customer, a co-worker, or your boss is doing so instead of listening to what you're saying, or when someones leers for a prolonged period of time.

Although, the girl from Joe's story is definitely in the 'knows what she's doing' category. The only reason anyone wears a tube top is to show off.
And on that subject, a busty girl wearing horizontal stripes? No, seriously, no! Everyone should know better than that!

WHY didn't you take pics? THEN you'd have proof! ROFLMAO

I've never thought of myself as THAT busty, except to myself. If I had my choice, I'd be smaller because they are a fucking pain in the ass. They get hot in the summer, and when I had full-blown psoriasis, it was a mess trying to find a bra that didn't irritate the skin underneath. Given a choice, I'd have breast reduction. Women who walk around with breasts so big they look like freaks (because they get HUGE breast enlargements) do themselves no favors. People make all sorts of assumptions about you and then you get mad about it. Well, DUH!

I must diagree with Hellraiser. Boobs are not like elbows. I don't particularly enjoy elbows more than the next person, but I like boobies o.o And I am a straight girl. There's just something hypnotic about boobs. As for the looks. People who flaunt them, as this girl obviously did, WANT the looks. I have big boobs and when I don't want the looks I wear something higher cut or closed.

It's because they don't cut shirts in sizes that can accommodate bigger breasts. If you buy a bigger size, it ends up looking pretty horrible, and face it, most women do not like to have to buy shirts in a much bigger size. You got 'em, you got 'em, you live with it, and sometime, just SOMETIMES a woman likes to be regarded as a human being; not a walking mammary gland. I'm sure if they could afford it and the temp wasn't upwards of 90 degrees in some places during the summer or spring, they'd always wear a blazer. But who REALLY wants to have to wear a blazer EVERY TIME they go out?

I don't think every woman who wears a revealing shirt has some kind of ulterior motive to catch a man in the act just so she can bitch at him.