Regular Coffee? What's That Again?
Somebody Get These People An Encyclopedia Of Mammals

Hello, all. Kitty Katzchen here after a long hiatus. I've posted a little on the Facebook page, but mostly I've been sort of AWOL. Bad Monster Blogger (If I'm still considered one, anyway.) -Bops own head-

Anyway, I have a real shitty story for you all today, but first I wanted to tell you all why I was gone for so long. In short, I had a devastating, and personal, medical emergency. It was about a month ago and I'm just starting to crawl out of my shell and back into the world. I'll have my own rant about the military ER at another time, but for now I want to go back in time to a place in my life that I have rarely mentioned: working at Marcike theater.

WARNING! THIS STORY IS NOT FOR THE FAINT OF HEART OR STOMACH! 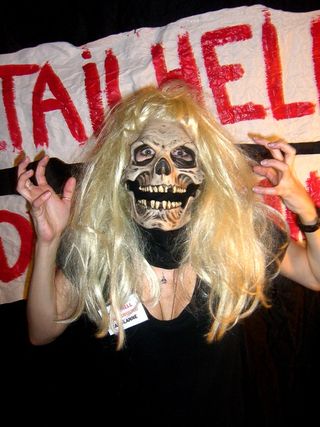 Marcike theater was my first, and second, job. I made a lot of good friends there and even found my first love. I was a doorperson (Which basically meant I cleaned the theaters, bathrooms, hallways, lobby, etc.) and was on one of my routine checks. Now, we had 4 bathrooms in our tiny theater: A three stall women's, a three stall men's, an 8 stall women's, and a one room men's. The first, third and fourth bathrooms were accessed directly from the lobby. The second, however, was sort of tucked away between theaters three and four. Even though it was small, it was still the men's main bathroom, since the other was only a one room/mostly handicapped one. Anyway, I was entering the men's room, now known as Hell, when I discovered a foul odor. This, actually, was not uncommon. No amount of bleach could get rid of the smell.

As I opened the first stall door in Hell, I was greeted by a sight that I, to this day, can not clear from my mind. Some nasty-ass Tun Tavern Tubesteak had shit on ALL THE SURFACES (Meme intentional)! It. Was. Everywhere. It was on the seat, bowl, AND back of the toilet. It was on the floor. It was on the stall walls and tile wall. It was splattered onto the floor of the next fucking stall. And then, as I was processing this literal shitstorm before me, I noticed something strange in the full, gag-inducing bowl. There was something white in there, and it sure as hell couldn't be the now destroyed porcelain.

Refusing to even imagine what it could be, I rushed from Hell like a dog was on my tail and practically slammed my way through the hallways and into the backroom of the concession stand. There, feeling safe around the cleaning supplies, I called my manager who was sitting upstairs.

Now, she was a generally good person, but had a hard time believing things she didn't see with her own eyes. So, I waited in my hidey-hole, ear to the door, and couldn't help a giggle when I heard her exclamation of "OH MY GOD!" followed by the clatter of heels as she tore the hell out of there.

To cut an already lengthy story short, she printed up a sign for us to hang on the door of Hell and had me recruit a coworker to help clean it. We held our breaths, periodically dashing out the door to get new air before rushing back to cleaning, and finally finished the job after half an hour of scrubbing and flushing. Afterwords, we were permitted our breaks, whereupon we chain smoked in wide-eyed horror while rocking back and forth in fetal position.

Oh, and the lovely surprise that was found in the toilet? A pair of XL tighty whities. Yes. They shat themselves, the entire bathroom, and caused irreparable damage to two of my five senses and then left their ruined undies hiding the in depths of the toilet instead of tossing them in the trash or, better yet, taking them fucking with them.

I understand accidents and all, but could this person really not have informed us of the issue? If they were embarrassed, could they not have pretended that they stumbled upon it? I swear, some people's kids.

Maybe they didn't leave: maybe they literally exploded all over the inside of the toilet (because, like Bono, they were a giant piece of sh...), and the underpants were the equivalent of the smoking boots left behind when a normal flesh-and-blood human combusts?

Sadly, it remind me of the weird as heck Japanese Poop Genie cartoon. Look it up on Youtube, because I'm not posing it. His name is "Burutabu-chan"

Yeah... ew. I involuntarily shuddered thinking about this. What is wrong with people? My niece peed all over the floor when she was a kid (she didn't tell me she had to go. She just went.) I went to the counter, got an employee, and I cleaned it up...

Welcome back to RHU! It's days like that that make you want to decriminalize arson...

Holy Crap! (No pun intended.) How does one explode and destroy a toilet? Who is this bad nasty ass custy? The Hulk?

Whoever he was, I really hope he went to the doctor, because that shit (pun intended) was just NOT ok. -Shudder-

This somehow does not sound like an accident to me. Now pray excuse me while I go get something to erase my memory.

It must have been a Golgothan...

Haha loving this website! The humor is awesome and the whole site's style and writing is spot on. Custy will have to be my word of 2012.

Keep it up guys!