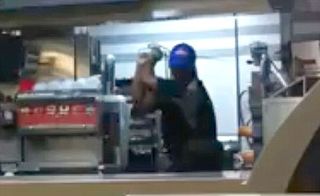 It seems that the fast food crazies are at it again. This time over an employee doing their job at checking a $50 for authenticity.
What is frustrating is that the employee, who did nothing until the customers threatened and attacked him first, was held on $40,000 bail (though not indited), while the customers got off with community service...when none of this would have happened in the first place if the customers had kept their cool and let the guy do his job.

I know the guy went overboard on his attempt of defending himself. But I find it a bit insulting that the first article focuses on his past criminal record and his actions after the customers hit him first then LEPT OVER THE TABLE AND CHASED HIM.
Then the second article, it seems that they chose not to take the customers to trial was because the video shown above was too strong against them and any evidence in their favor was too circumstantial or unable to be found. (Wouldn't one think those would be *good* reasons to take defendant to trail?)
Then the employee even shows his remorse and better nature by saying he doesn't wish jail time on the customers despite their wish to see him imprisoned.

So, yet again, min-wage employees are verboten from defending themselves, are held under stricter scrutiny when they do, and the offending persons get a pity party for any repercussions they may receive.

Yes Ma'am! May I have another Ma'am?

The problem against the employee is that once they were down on the ground and no longer a threat, he continued beating them. At that point, his actions most likely shifted from self-defense to assault. As for the comments on the second article, it appears that the evidence available points more of the blame on the custys, rather than the employee, so the custys' lawyer decided not to push for a trial.

Good for the employee. I'm of the opinion if you started the fight be ready for the other person to finish it. Look at it this way: those idiots were taught a valuable lesson about couterfitting and assault. Don't do it or get severly beaten.

Nah, I don't agree with you Skittles. I've always learned that self-defense is that you stop a threat with moderate force. In this case the offender was down. The employee should have backed off and call the police, just like his colleagues are trying to get him to do.

I'd like to say this wouldn't be an issue if the store had the policy of not taking anything larger than a $20, but having seen crustys flip out even over something like that I know there is no hope for the world.

I have to agree that the guy went too far once they were done. Don't blame him, but from a legal viewpoint it was over the line. that said I bet that customer won't pull that stunt ever again.

Yeah i know from a legal standpoint he went way over the line. From a moral standpoint is where I was coming from.

When adrenaline kicks in, it's hard to realize when someone is no longer a threat to you. Now they deserved that colossal ass-whooping, and thankfully the employee didn't see any jail time.