Meanwhile In The Land Of Valentinia, Home Country of Junior Mints, Easteria Invaded!
As A Former Retail Worker... I Can Only Cry For Humanity 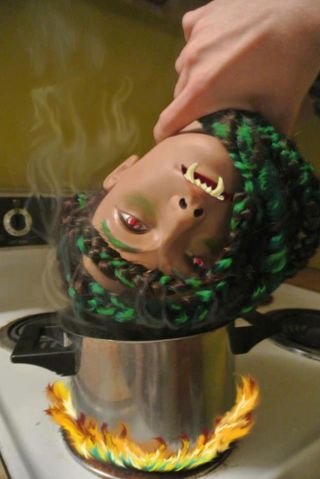 The other day I found myself drifting into the murky past of my retail history. Upon that trip through Nightmare Boulevard, I happened to remember my encounter with...The Wreath Lady.
*foreboding music*

When I was in college and working weekends and school breaks at a craft store, I usually worked one of the departments...stocking, ordering, helping customers...but a few days I ran register as well.

On one particularly nice afternoon, the kind where you'd almost be willing to roll around on gravel just to be let out and enjoy the cool, sweet air and the bright, warm sunshine, my fellow cashier "GG" (who had been working there since they opened) and I were wistfully gazing out the window between customers and waiting for our shifts to end.

Suddenly the wind shifted. The sky reminded bright and the air remained cool...but the cheerful sweetness had left, leaving a sour uneasiness. Even the birds flitted away and cowered in hushed silence.
Enter, The Wreath Lady, with a glaring expression and a superior air about her.

I had never encountered TWL but I had enough jadedness of retail to know that when I crusty gains nickname status, it's something to be noted.

TWL strolled over to the floral dept with her cart, pointing her nose and eyeing everyone as though se were walking through a peasant village instead of a craft store. She went and loaded her cart to overfilling with grapevine wreaths and headed to my register. GG breathed a sigh of relief, I braced for impact.

"Oh course it had to be my register...I'm so lucky" I thought with a twist in my stomach.

TWL stood at my register, leering at me and doing nothing.

Realizing that she thought herself too good to unload her own cart, I reached over and started taking the wreaths out of the basket. They were very large wreaths, and shoved rather firmly into the cart as well...becoming somewhat tangled.

Now, for those of you who are unfamiliar with grapevine wreaths, they are twisty bundles of dried vines with lots of little twigs and tendrils and sprigs sticking out all over. They are very brittle and considerably delicate for their size.

As soon as I gave the slightest tug on the first wreath, TWL screeched at me.

"What are you doing!? Don't you break my wreaths!"

I offered to key them in manually, since we would just type in the price and dept code anyway, I figured I could just look at the tags while they were still in the basket.
She looked at me with disgust.

"Don't be stupid. I WANT them BAGGED! And don't you break a single twig!"

Internally I thought, oh shit, bags? For grapevine wreaths?  Without breaking off any of the tiny little bits that stick out? You gotta be kidding me.
So for the next hour or so, I painstakingly removed each wreath from the cart, keyed it in, and placed them in bags with surgical precision. With TWL all the while sighing and tapping her foot and rapping her fingers with professional grade impatience. Some of the largest ones wouldn't fit entirely into a bag and TWL growled at me.

"Put two bags on that one, I don't want them ruined by having any sticking out!"

*Sigh* I delicately pull another bag over the other end of the largest wreath, the middle still stuck out.

"I'm sorry, these are the biggest bags we have" I meeped

TWL just glared as if I'd just said her shoes looked like she stepped in aardvark shit. (Which they did, by the way)

Once the order was completed, I told her the total and she pulled out her checkbook and scrawled out the info. I lifted the bags and handed them to her lightly, which she promptly smushed back into the cart. I cringed with the sound of her precious tendrils crunching and snapping with each shove.

And the fondant on this crapcake of a story is, when I glanced at her check to put it in the till, it was one of those Bible verse checks...and the verse was even something about patience and kindness. Way to be a good example of what you claim to represent, lady.

I din't know they even made checks with Bible verses printed on them. And this female [definitely not a LADY] is most definitely a hypocrite.

On a side note, how did *you* know what shoes that have stepped in aardvark excrement looked like? I don't even think I've ever seen a live aardvark, let alone be able to tell what its droppings look like after shoes have been in them. :)

She should die in a fire made with a pyre of her precious frickin wreaths.

It's times like this I wish I could be in charge so when customers like this came in, I could give them a piece of my mind. At the first hint of trouble, I'd come up and say,

"This is your only warning. Do not be rude to my workers, or I will remove you from the store."

Of course when someone like that hears that, they'll probably flip out. Which means I'll tell them, "You blew it! Now get out!"

In fact, it's times like this I wish all stores had rules for customers as opposed to things like just restaurants, libraries, etc.

Oh geez, I offer massive kudos to you. How you got through that without snapping and breaking a wreath over her head is astounding and awe-worthy.

Of course, when she gets them home, takes them out of the bag, and finds all the broken-off ends, think she'll calmly realize that it was her fault?

Maybe she should have had a different bible verse on the check that would represent better.

Like Psalm 137:9
Happy shall he be, that taketh and dasheth thy little ones against the stones.

That way, everyone's happy and Christian.

@Alleee: Right?
What a wench! If you buy delicate things, it's natural to want to keep them safe but GET REAL. WHY would you cram so many in the cart and make it such an ordeal for the worker and THEN have the brassies to treat the retail slave like it's THEIR fault that they hafta fix up the mess YOU created?
And the Bible verse...why aren't I shocked?

People like her are the reason they invented booze.

I would have followed up her comment of "aren't you gonna ring me up" with "Once you act like everyone else and put your merchandise on the counter/belt/whatever."

Then again, I'm not nice, and I have a very difficult time biting my tongue to hold back something rude when someone behaves like they're above someone else.

Yeah I could not have handled that without snapping. It is quite impressive like BookAce said.

@SAG - I actually often think about hiring myself out to places that have one or more consistantly bad customers/patrons. Then I'd just hang out pretending I'm shopping until they come in and cause a problem. Soon as they do I'd jump to the staff's defense, telling that customer what an ignorant putz they are and that they need to grow up. Generally verbally humiliating them.

The fuck is she doing with all those wreaths?

In the last 8 years, every time we have had a customer with a bible quote on their check, they were nuts. OR, they were "Great" Christians and felt that they should receive special treatment, or free services.
Every time, without exception. So much so that the past year, we declined 2 jobs because of their crazy beliefs. We don't care about orientation, religion, or anything like that - we just care that you're not nuts.

Kudos to you. I would have snapped.

As it is, I can't stand when people at the grocery store put their baskets on the belt and expect me to unload it for them. More than once my response to them (after asking them to unload it and they pitch a fit) is "I wouldn't unload your cart for you, what makes you think I'd unload your basket?" ((Unless of course there's extenuating circumstances like disability or really old age where they do need the help with heavy items or whatever.)) I . . . have no idea what I'd do if I had to deal with this lady. Probably throw a blood clot and stroke out.

@Jami - I have often admired the guts of Customer #2 - the person in line behind the crusty who is being a douche to the cashier. Customer #2 points out the douchiness of the crusty, and shames them into behaving or apologizing. What you propose is a professional Customer #2, and I applaud this idea. We must make this a thing, for the sanity of all retail slaves worldwide.