Are You Smarter Than A 1st Grader? Thank Your Teachers For That
Label Douchiness 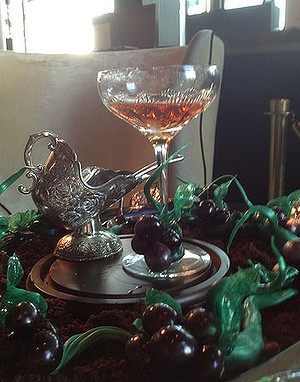 According to this article the drink was only given a sip and passed for "good"
~~~~~~~~~~~~~~~~~~~~~~
What does the man whose name will sit in the record books alongside the world's most expensive cocktail do when his much-hyped $12,500 masterpiece finally arrives?

The buyer, who wished to remain anonymous, last night took a few polite sips for the assembled media, and nibbled gingerly on the edible garnish it was served with. He appeared somewhat overwhelmed by the fuss that included his own roped-off section of Crown Melbourne's exclusive Bar 23 and a chair probably more accurately described as a throne.

Pronouncing it to be "good", the buyer signed a cheque and an official statutory declaration, then disappeared into the night.

The mega-expensive concoction was tasted and then wasted as its purchaser departed the scene of the world record attempt. Photo: Steve Colquhoun

The majority of the most expensive cocktail ever poured was left undrunk, still nestled in its ridiculously splendid hand-made garnish.

This concoction has occupied the considerable skills of a highly trained barman and a team of chefs over two days, and contains two nips of an 1858-vintage cognac at $6000 a shot - along with Grand Marnier Quintessence, chartreuse Vieillissement Exceptionnellement Prolonge, and a dash of Angostura bitters.

It has been hyped, coveted, obsessed over, and promoted in local and national media in the days leading up to the event. The Guinness Book of World Records has been notified, and official witnesses drafted - including the author of this story - to attest to the historic moment.

The basis for the cocktail is a bottle of Croizet cognac dating to 1858. It is, itself, already a world-record holder, having previously been valued at $157,000.

The bottle was purchased from Croizet by Bar 23. Its barman, Joel Heffernan, put two days' preparation into the cocktail.

Heffernan's concoction was presented with chocolate nutmeg dust, essence of poppy seed and roses, and hints of coconut, passionflower and oranges.

The previous world record for a single cocktail is held by Salvatore's Legacy, a concoction developed by barman Salvatore Calabrese using Clos de Griffier Vieux cognac that dates to 1778. It sold for £5500 ($8330) in October last year in a London bar.

Crown spokeswoman Ann Peacock said although the world record would belong solely to the New Zealand businessman, anyone else with the inclination - and finance - to try the Winston would still be able to indulge.

The guest of honour had arrived at Bar 23 dressed in a white shirt, casual black pants and a pair of sandals that would probably not have made it past the front door any night other than this one.

It was later explained that the buyer wasn't feeling well. He had retired to his room and was unlikely to return.

Still, the media abhors a vacuum, so it was left to the other star of the hour, barman Heffernan, to make himself comfortable in the plush chair and accept all the plaudits and glory. Which he happily did.

Damnit! If i'm gonna ever have a drink that costs thousands of dollars it'd better taste better than the Pan Galactic Gargle Blaster and made by mermaids and pink bunnies.

I'd rather have a Pan Galactic Gargle Blaster myself.

I wouldn't spend much money for this very expensive drink. Absolutely impractical and the buyer didn't even enjoyed it a bit.

It doesn't sound that good, honestly. I think they were thinking less of what would work well together as far as flavor combinations and more about price tag combinations.

Am I the only one that thinks the world could be greatly improved, if all the people involved in those drinks were drug into the street and then shot?