St. Paddy's Day On a Budget
Mannequins Model Normal Sized Clothing For Once 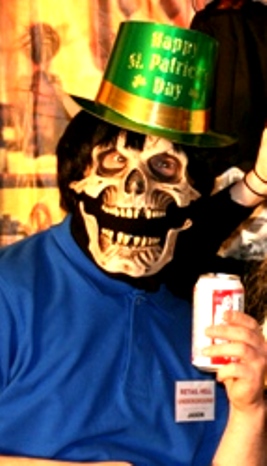 For obvious reasons you can call me Foureyes. I am a 19 year old high school student. (Graduation in 3 months!) I live with my parents until I go to college in the fall, I pay them about 100 dollars out of my paycheck every two weeks just for bills and such. So anyway, for the last year or so I've worked for Hellmart. The pay is decent for a 19 year old, covers my bills and gives me some spending money.

I come into work to a huge rush. Electronics is always busy when I come in, so no big deal. I get on register to get the huge line down. Guy behind me on the ticket master. I finish the first transaction and then realize I have no recipt tape. So I do a quick and frantic look around, nothing. So I decide to borrow the receipt tape from the register with ticket master until the guy is done with his tickets. (Keep in mind I have a huge line and he's taking a while).

My Coworker (we'll call her Idiot) starts yelling and screaming at me that we're "not allowed to do that."

She was yelling at me in front of customers I might add. Oh, and I have seniority over her. I try to calmly explain to her that I can do that if there is a huge line and no recipt paper anywhere. She then goes off saying "WE CAN GET IN TROUBLE FOR THAT!"

She's yelled at me in the past and the pressure is really getting to me at this point that I snap and say "Stop yelling at me."

She then tries to argue saying that she wasn't yelling at me. Yeah, okay. That's why the line of maybe 10 people heard you. Anyway so I run across to the Photo department (Where I actually work. She was doing a contract for a phone so I decided to help her out.)

My Coworker in photo (greatest guy ever btw) Says I can borrow his tape because he doesn't have a line. I hear the customers getting the phone start bitching saying "Whoever hired her must have been special ed."

Classy. So I ignore them and continue to help customers. Until the one lady getting the phone starts throwing her salary in my face. 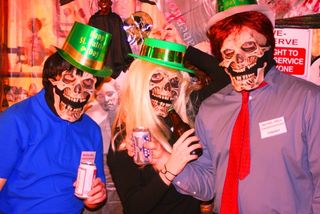 Lets go over this again. I'm a high school student who works at Hellmart. Obviously you make more than me. That's what I told the bitch.

Bitch: "I could pay your rent."

Me: "My rent is free. So anyone could pay it. She then just kept insulting me to my coworker, who was, of course, agreeing with her. Then she said this little gem.

Bitch: "I could shut down Hellmart and take your job away from your useless a**!"

Yes, she claimed that she could shut down an entire corporation by herself because she has a good job. She also complained to my manager that I was being rude. My manager never said anything. (She's awesome too.)

Karma got her because her credit score was too low for her to get a contract phone. She walked away screaming that it was ridiculous.

That bitch made me so angry that I started shaking and was biting back tears. I was just about to quit that day but later decided against it.

Well that's my (not so) short story. May all your customers be human.

Too bad with all that money she couldn't buy any manners.

If she has so much money, why is she shopping at Hellmart? Yeah, okay, it's cheap and close to home, but if I had money, I'd be shopping the good life! Maybe that's just me though...

Lol. Bad credit? Apparently that entitled bitch can't hold her money. Looks like you have that on her. Chin up. She's just a bully with no one to pick on. You're so perfect you insulted her. n_n

Don't let her get you down. There are just bitchy, unhappy people in the world. She's one of them. You're being responsible and working hard and those are traits that will get you far in this world. She'll probably choke on her hatred anyway so let her mean bitching fall off you like water off a duck's back.

Well, if she's unable to get a contract phone, she obviously isn't able to shut down Hellmart and get everybody fired.

If I knew where you were, I'd wonder if that was the same woman I overheard at my HellMart pulling something similar...I asked "If you're so important your shit don't stink, why are you shopping at a HellMart? I'd be at Neiman Marcus buying the good stuff."

Doesn't matter how much money you "make" if you're in so much debt, that you can't even get a contract phone because your credit score screams "You can't even pay simple bills". Then sorry but the teenage min wage worker is still ahead of you in life.
Women was probably mad because she got a repo letter on her car from the bank, and took it out on you.

It's actually pretty standard for the wealthy to have terrible credit. How do you think they get wealthy in the first place. The longer they can put off paying someone the more interest their money can earn, and if they can intimidate someone into giving up then whatever it was is free.

It wasn't my favorite day at work. I'm pretty sure she was insane. She also threatened to come behind the counter and bitch-slap me.

I have no clue what's wrong with humanity...

Haha well now you know why she was at Walmart. I have never met an actual wealthy person that has thrown about how much money they make. Just like the "do you know who I am?" If you're that important, you shouldn't have to say that.....

Idiots with credit cards are the worst kind of people.