Karebear Updates About StuckUp And Snob 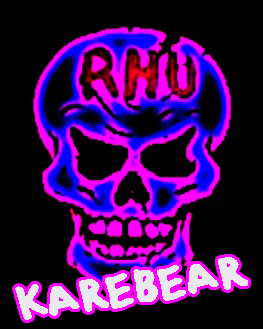 Pepper and I have decided to look for a new gym. We found one that was a little more pricey, but much friendlier. However, BlueEyes decided to stay behind at the old place, and since he and Pepper are still in contact, we heard about the lovely events that went down.

Turns out Snob and StuckUp were underage. 16 years old to be exact. I still wondered why they weren't in school then because we went at different hours of the day - both morning and afternoons. But whatever, not my business really.

Well, turns out one of them, I want to say Snob, but could have been StuckUp (BlueEyes said the blonde, they were both blonde) was pregnant. Mommy and Daddy found out, went ape shit, started to press for information about the father. Snob/StuckUp said it was the manager of the gym (not the owner, just manager) who is well into his 40's.

According to BlueEyes the rant went something like, "Who the fuck do you hire? Do you not even look at their records to make sure they aren't kiddie rapists? And TO LET THEM DO IT HERE IN YOUR GYM! I should sue! I'm going to sue! I want this fucker arrested right now!!!"

That's really all the details we got because the owner dragged the screaming father into the office and shut the door. BlueEyes decided it was time to get ready to leave and said he saw two police officers and Snob/StuckUp and her mother enter on his way out.

Whether this girl is speaking the truth or pulling some bullshit out of spite for some reason, I'm still glad Pepper and I left. I'll stay at my drama-free gym from now on, thankyouverymuch. (Old gym was kind of in a seedy looking area...go figure.)

VOMIT. Wasn't this little bitch looking for a fuck-buddy, too? That's probably why. Given her nasty-ass hitting on your friend, and then showing up PG and claiming that the manager of the gym is responsible, I'd say her parents' best bet at this point is to contact Maury. Cuz I'm pretty sure this manager (if he was involved with her) wasn't the only guy dippin' in her honey pot.

Well you thought as much seeing as the manager never did anything when people complained about them.

Sounds like this tart spreads her legs for anything with a d!ck. Good luck finding the father...

Karebear, keep us posted on this if you can.

I'd really like to know how this one ends... ditto on what everyone above says. Yowzers!

If they are trifling enough to hit on a guy CLEARLY older than them, I wouldn't doubt the fact that one or both was willing to do something so stupid and illegal as have SEX with one.

So love it when the parents are made at everyone, but themselves and their stupid twit of a daughter.

I'd do just about anything to see the look on the girls face if the manager isn't the father! Or, better yet, the look on her parent's faces if it turns out that the manager didn't knock the lying little tramp up. Keep us updated if you can.

PLEASE let us know what goes down! Sounds like someone is getting her ipod and gym membership taken away! Seriously tho, if her parents raised her to be like that, and then blames everyone else for their crotch fruit rotting, even that's a little extreme! I hope she gains alot of weight during the pregnancy and cant lose it all, so she knows how it feels to be called fat. Sadly, daddy will probably just pay for her liposuction, hopefully the dr doesn't suck her fucking brain out! Sorry, people like that just fucking piss me off *deep breath* but seriously let us know what happens this is like jerry springer meets general hospital 0_0

"Do you not even look at their records to make sure they aren't kiddie rapists?"
Is that supposed to be on the application, or does it require a blood test?

mcnug, those two girls have brains?

Just an aside- yes, she's an awful little stuck-up girl, but the manager was old enough to restrain himself. 16-year-olds can be really stupid, that's *why* the age of consent exists- at 16, you're still a kid and most don't fully understand the seriousness of the consequences that come with sex. The over-40-year-old manager sure as hell understands, and therefore he took advantage of a kid. Go To Jail! Yes, the girl was awful, but holy shit- she's still a kid. She needed a tough lesson, but some lessons have more lasting consequences than others. And we don't know her parents didn't rip her a new one, too, before coming down on the nasty-ass manager.

I agree it's pretty pervy that a 40 yr old was willing to have sex with a 16 yr old. Shouldn't matter if it was her idea and she had slept with lord only knows how many people it's not a good idea to have sex with someone under 18 ever more so when you're old enough to be their parent. Jail Bait.

I'd like some actual proof that the manager did anything before I condemn him.